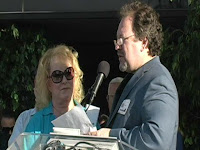 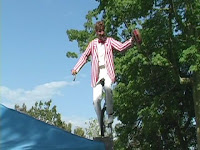 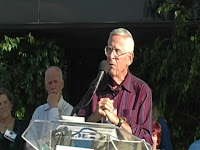 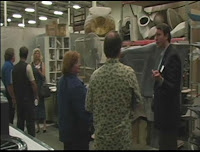 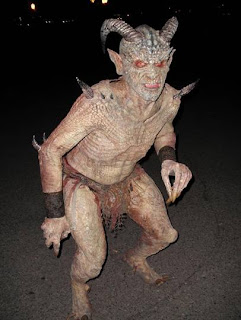 The open house was held in connection with the Themed Entertainment Association. TEA members present included Phil Hettema and George Wiktor of The Hettema Group, TEA manager of member relations Brian Szaks, Lynn Allmandinger of Wells Fargo, Larry Tuch of Narrative Concepts, who is one of the organizers of TEA’s annual SATE conference, and TEA Western Division president David Aion of Aion Creative. Several past presidents of TEA were present, including Wiktor, Roberta Perry of ETI and TEA founder Monty Lunde of Technifex. Carole Mumford, former event planner for TEA, had just accepted a job with GHP.

From the podium Garner Holt spoke about various projects where GHP has applied state-of-the-art animatronics, ranging from Chuck E Cheese characters to dark ride figures for Universal Studios and other major theme park operators, to military training environments, educational touring exhibits for museums and zoos and of course, the cradle of animatronic civilization: haunted houses.

GHP employs about 80 people and plenty of them (several in costume) were on hand to talk about their work as open house attendees toured the animatronics company to observe the workings of the very specialized and complex design and fabrication processes by which animatronics are brought to seeming life. There were character heads and body parts everywhere… It was clear that employees at GHP relish the creative opportunities and challenges they find there and are engrossed in and proud of their work. Each project presents a new set of conditions to solve in design, execution and installation and Holt himself continues to take a hands-on creative role alongside his staff. “There’s a lot of talent in this company,” says Holt. “There are a lot of dreamers and artists who have found it is a place to collaborate with others. In their off hours, they’re back there building all kinds of neat stuff, and that feeds back 100% into their work for the company. It’s nice to see all their gears turning.”

Holt also regularly puts resources into animatronics research & development, and the latest manifestation of this is the Yeti, a creature nine feet tall and several years in the making, expected to step into the spotlight for the first time later this year. The GHP team is working hard to finalize the Yeti for a 2010 debut – to get this gentle, hirsute talking giant assembled and in full working order all the way from his powerful internal actuators to his extensively articulated appendages to his astonishingly mobile facial features – so that the industry can meet him and mull over the possibilities. According to Holt, the Yeti has 54 individual moves in his face and 164 functions in his body, and can “see” via a camera in his eye. Through the combination of an image database and his vision, the Yeti will have the ability to identify people, single them out to communicate with, track their locations and follow them around – a real party animal. He weighs 1,800 lbs and speaks in a Scooby Doo type voice. And he embodies what Holt sees as the future of animatronics: “Technology is causing the role of animatronics to change – it’s becoming more based on interactivity.”

“I’ve pulled out all the stops with the Yeti: I may have gone a little overboard. He’s my child.”

Judith Rubin
Judith Rubin ([email protected]) is a leading journalist, publicist, strategist, blogger, content marketing specialist and connector in the international attractions industry. She excels at writing about all aspects of design and technical design, production and project management. Areas of special interest include AV integration and show control, lighting design and acoustics, specialty cinema, digital video and world’s fairs. Judith has ties to numerous industry organizations. From 2005-2020 she ran communications, publications and social media for the Themed Entertainment Association (TEA). In 2013, she was honored with the TEA Service Award. She was development director of IMERSA, and co-chair of the 2014 IMERSA Summit. She was publicist for the Large Format Cinema Association in the 1990s, now part of the Giant Screen Cinema Association (GSCA) and has also contributed to the publications of PLASA, IAAPA and the International Planetarium Society. Already making her mark as a magazine and book editor, Judith joined World’s Fair magazine in 1987, which introduced her to the attractions industry. Launching as a freelancer in the mid 1990s she has contributed to dozens of publications and media outlets including Funworld, Lighting&Sound America, Sound & Communications, Urban Land, The Raconteur and The Planetarian. She joined InPark in 2010. Judith earned a Bachelor of Fine Arts from Pratt Institute. She has lived in New York City and the San Francisco Bay Area, and now makes her home in Saint Louis, where she is active in the local arts and theater community.
Share
Facebook
Twitter
Linkedin
Email
Print
WhatsApp
Pinterest
ReddIt
Tumblr
Previous articleSESAME PLACE CELEBRATES 30 YEARS OF BRINGING OUT THE KID IN ALL OF US
Next articleGeneral Manager Announced for LEGOLAND® Florida