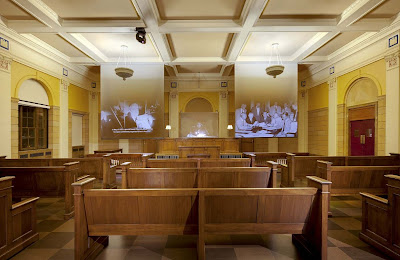 Orlando, FL, USA (June 19, 2012) — There are two sides to every story, as the tag line for the Mob Museum in Las Vegas reminds us, and Alcorn McBride is helping the city’s newest attraction tell the tales of both organized crime and law enforcement. The Mob Museum is utilizing a full inventory of Alcorn McBride equipment for audio, video and show control throughout its historic 1930’s location, a former federal courthouse and post office.

“We have three floors of exhibits, and a large portion is content. Visitors start at the third floor with the birth of the mob and continue down to the first floor, which documents the mob today,” explains Ryan Markus. “There’s so much amazing content: The average leg walk [for visitors] is two hours. Most of our equipment is controlled by Alcorn gear – we have several racks full – and it’s been awesome.”

Five Alcorn McBride V16Pro frame-accurate show controllers for serial and network devices control six Digital Binloop HD’s, which play loops of a diverse range of video content tailored to particular exhibits. One exhibit calls for visitors to pick up a rotary telephone that sends a tone to one of the V16Pros telling it to play a certain audio track. The tone in turn signals an Alcorn McBride AM4 Digital Audio Machine, a professional MP3 and WAV audio player.

A total of 10 AM4s are in use in the museum; some provide playback for phones that give visitors an idea of what ‘mob speak’ sounds like.

Show control via more V16Pros comes into play in a courtroom exhibit featuring a seven-minute, four-projector show. The system opens and closes the courtroom door and rolls up the screen when the show concludes.

A LightCue DMX recorder and four Alcorn McBride DMX Machines control over 1,500 lights in the museum. “Almost all of the lights in the building are controlled with the DMX system,” notes Markus.

The Mob Museum currently uses ShowTouch, Alcorn McBride’s touch panel interface for Alcorn McBride show controllers with Ethernet, for tour guide presentations. But it will begin to deploy the company’s new ShowTouch for iPad, a touch panel interface app for the popular Apple platform. “The private guides and tour operators use iPads, and soon they will be able to use Touch for iPad to pause and restart equipment as they give their presentations,” Markus explains.

Calling the Alcorn McBride gear “awesome” and “rock solid,” he notes that the system “has come back online without any issues after a couple of power outages. It’s really great!”


About Alcorn McBride
Founded in 1986, Alcorn McBride is the leading manufacturer of show control, audio and video equipment for the themed entertainment industry, and a rapidly growing provider of audio and video systems for retail environments and transportation applications. Staffed by some of the industry’s best engineers and backed by outstanding customer support, the company has demonstrated great agility in bringing new designs to market. A hallmark of Alcorn McBride products is their durable, zero maintenance design. The company’s products provide consistent, reliable operation for audio and video playback applications worldwide. For more information, visit www.alcorn.com.

Joe Kleimanhttp://wwww.themedreality.com
Raised in San Diego on theme parks, zoos, and IMAX films, InPark's Senior Correspondent Joe Kleiman would expand his childhood loves into two decades as a projectionist and theater director within the giant screen industry. In addition to his work in commercial and museum operations, Joe has volunteered his time to animal husbandry at leading facilities in California and Texas and has played a leading management role for a number of performing arts companies. Joe previously served as News Editor and has remained a contributing author to InPark Magazine since 2011. HIs writing has also appeared in Sound & Communications, LF Examiner, Jim Hill Media, The Planetarian, Behind the Thrills, and MiceChat His blog, ThemedReality.com takes an unconventional look at the attractions industry. Follow on twitter @ThemesRenewed Joe lives in Sacramento, California with his wife, dog, and a ghost.
Share
Facebook
Twitter
Linkedin
Email
Print
WhatsApp
Pinterest
ReddIt
Tumblr
Previous articleSansei Yusoki to Make Investment in S&S Worldwide
Next articlePreliminary program and speakers for SATE 2012 at Disneyland Paris, 19-21 Sept