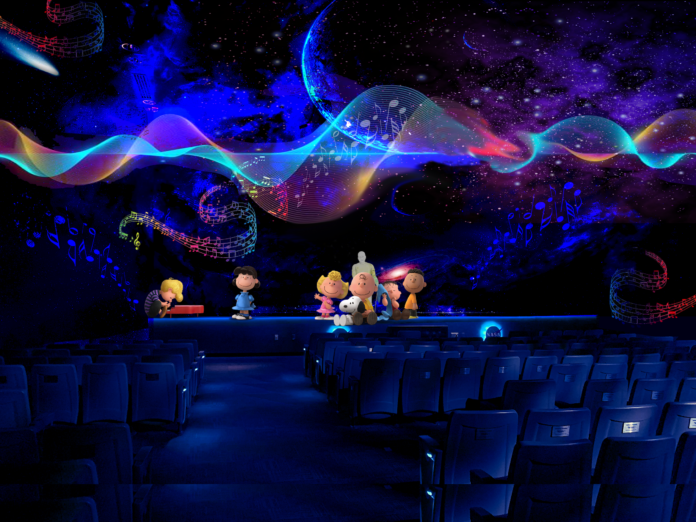 The Kennedy Space Center Visitor Complex has commissioned Ella Louise Allaire and Martin Lord Ferguson of the acclaimed Montreal-based production company Monlove to create All Systems Are Go, an original live, immersive educational entertainment experience to be presented at Kennedy Space Center Visitor Complex, targeted to begin in spring 2023. It will feature beloved Peanuts characters including Snoopy, Woodstock, Charlie Brown, Sally, Linus, Lucy, Franklin and Schroeder. Monlove is transforming the visitor complex’s 300-seat Universe Theater for All Systems Are Go with Dolby Atmos sound, motorized scrims and more than 20 integrated laser projectors to enhance the project’s high-end immersive edutainment experience. The original orchestral score composed by Allaire and Ferguson will offer music in an eclectic mix of orchestral, contemporary, and jazz styles. Using augmented reality interactive technology, audience members will be able to use their smartphones to scan the environment to discover space elements and a music sequence.

The 20-minute experience, included with admission and offered daily, will feature the Peanuts gang appearing as four to five-foot-tall articulated characters operated by puppeteers. The characters will narrate the iconic history of NASA, the Artemis missions, and future plans in an educational and imaginatively enlightening way for the whole family. NASA’s Artemis missions will land the first woman and first person of color on the Moon and establish the first long-term presence on the Moon.

Monlove’s CEO & Founder Ella Louise Allaire and Chief Content Officer Martin Lord Ferguson said, “We are over the Moon at the opportunity to work with Kennedy Space Center Visitor Complex and Peanuts Worldwide on this project to conceive a world-class experience that will both entertain and educate the audience about what NASA has achieved and will pursue in the future. The creative potential for telling this larger-than-life story through the eyes of the fabled Peanuts characters is as vast and exciting as space itself.”

“Peanuts has had a long association with space, starting with NASA’s Apollo 10 mission in the 1960’s to Snoopy being the zero-gravity indicator on the upcoming launch of Artemis I”, said Craig Herman, Vice President, Global Brand Experiences & Publishing, Peanuts Worldwide. “This joint effort between Monlove, Kennedy Space Center Visitor Complex and Peanuts Worldwide is a fantastic avenue for fans to learn about Peanuts and NASA’s storied history as well as experience Charles Schulz’s iconic characters in a new and exciting way.”

The seasoned duo of Ella Louise Allaire and Martin Lord Ferguson will act respectively as creators of the experience’s original concept, story, and music as well as executive producers for this new project. The collaboration is Monlove’s first association with Kennedy Space Center Visitor Complex and Peanuts Worldwide and follows Monlove’s two successful associations with Warner Bros. Themed Entertainment, featuring the recent live stage show Scooby-Doo! and the Lost City of Gold and the upcoming fall 2023 live theatrical and musical stage show with the internationally recognized Looney Tunes characters.

Kennedy Space Center Visitor Complex brings to life the epic story of the U.S. space program, offering multiple days of fun, inspiration and educational activities. Included with admission: The all-new Gateway: The Deep Space Launch Complex, Heroes & Legends, featuring the U.S. Astronaut Hall of Fame®, presented by Boeing, Space Shuttle Atlantis®, Journey To Mars: Explorers Wanted, space films, the Rocket Garden, Planet Play and the Apollo/Saturn V Center. Just 45 minutes from Orlando, Fla., Kennedy Space Center Visitor Complex is opens daily at 9 a.m. with closing times varying by season. The new, two-day ticket, which can be used for up to six months from purchase and averages to a cost of less than $45 per day, is now available for $89 per adult and $79 per child. Single-day admission is $75 per adult, $65 per child. For more information, call 877-313-2610 or visit KennedySpaceCenter.com.

The characters of Peanuts and related intellectual property are owned by Peanuts Worldwide, which is 41% owned by WildBrain Ltd., 39% owned by Sony Music Entertainment (Japan) Inc., and 20% owned by the family of Charles M. Schulz, who first introduced the world to Peanuts in 1950, when the comic strip debuted in seven newspapers. Since then, Charlie Brown, Snoopy and the rest of the Peanuts gang have made an indelible mark on popular culture. In addition to enjoying beloved Peanuts shows and specials on Apple TV+, fans of all ages celebrate the Peanuts brand worldwide through thousands of consumer products, as well as amusement park attractions, cultural events, social media, and comic strips available in all formats, from traditional to digital. In 2018, Peanuts partnered with NASA on a multi-year Space Act Agreement designed to inspire a passion for space exploration and STEM among the next generation of students.

As Monlove’s primary creative team, Ella Louise Allaire and Martin Lord Ferguson have combined their skills as storytellers, composers, producers, librettists, and lyricists to create material for an impressive list of exceptional productions, including the Cirque du Soleil shows Kà and Zed, The Nut Job Live & Friends, a trailer for the film Avatar, the films Conan the Barbarian, The Scorpion King 2, the video game Spiderman – Shattered Dimensions, the concept, book, music and lyrics for the multi-billion-dollar 20th Century Fox franchise Ice Age Live! A Mammoth Adventure—which toured 48 countries, was translated in twelve languages and grossed over $100 million,andWarner Bros. Scooby-Doo! and The Lost City of Gold as well as the upcoming Looney Tunes Musical. In addition, Allaire wrote the hit song “Rinalto Vera” for Cirque de Soleil’s dazzling show Alegria, and her music can also be heard on the feature film Journey to the Center of the Earth. Ferguson’s talents as an engineer have produced more than 30 albums for companies including Holiday on Ice and Cirque du Soleil and he scored the music for the award-winning movie White Skin and the top TV drama series in French Canadian history, Fortier. Together, the two artists conceptualize and generate a totally unique creation for each project they undertake and have brought Monlove to an unparalleled position of excellence. Visit monlove.com for more information.