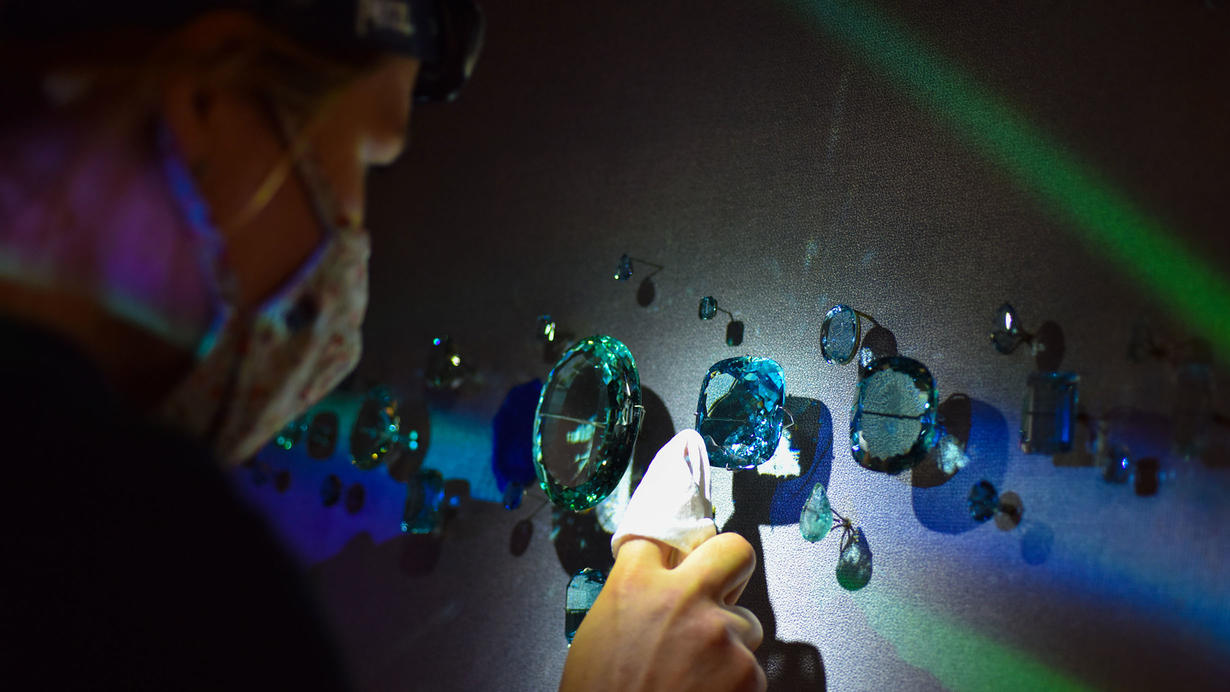 The American Museum of Natural History has announced that it will open the all-new Allison and Roberto Mignone Halls of Gems and Minerals on February 17, 2021. A brilliant showcase for one of the greatest collections of its kind and an engaging guide to recent science about our dynamic planet, the 11,000-square-foot halls will feature:

recently acquired specimens, including a 3,000-pound block of iridescent green and blue labradorite, two remarkable amethyst geodes which, at 12 and 9 feet tall, are among the world’s largest on public display, and a slice of a fossilized tree called a metasequoia that lived between 35 and 33 million years ago;

visitor favorites like the Singing Stone, a massive block of vibrant blue azurite and green malachite that was first exhibited at the 1893 World’s Fair in Chicago, and legendary gems such as the 563-carat “Star of India” sapphire and 632-carat Patricia Emerald;

a luminous gallery featuring a wall-sized panel of rock glowing fluorescently in brilliant orange and green;

and the halls’ first temporary exhibition space, the Melissa and Keith Meister Gallery, opening with Beautiful Creatures, a celebration of exquisite historic and contemporary jewelry inspired by animals, with pieces by Cartier, Tiffany & Co., and Van Cleef & Arpels, as well as by contemporary designers such as Bina Goenka.

The halls’ redesigned exhibits, featuring about 5,000 specimens from 95 countries, will tell the fascinating stories of how mineral diversity arose, the environments in which minerals form, how scientists classify them, and how humans have used them throughout history for personal adornment, tools, and technology.

“Generations of New Yorkers have loved the Museum’s mineral and gem halls, storing up memories of family visits and marveling at the glamorous displays of utterly spectacular minerals and gems, while learning about the latest scientific explanations for their formation. Now, as New York continues to endure the many challenges posed by COVID-19, we are proud to be among the first major new museum spaces to open,” said Ellen V. Futter, President of the American Museum of Natural History. “These magnificent halls remain true to the traditions that New Yorkers cherish while signaling the reawakening of the entire City.”

“When I first started as a curator at the Museum over 40 years ago, the most recent version of these galleries had just opened,” said George E. Harlow, a curator in the Museum’s Division of Physical Sciences and curator of the new halls. “Science has progressed significantly in that time, such as with the concept of mineral evolution. These new exhibits will present to the public our current scientific understanding of gems and minerals, present the environments in which they form, and emphasize the intimate relationship between minerals and life.”

“Halls like these are crucial and tangible teaching tools that communicate the incredible variety of minerals on Earth and how they relate to our lives,” said Allison Mignone. “The mission of the entire museum is really to educate and inspire—these newly renovated halls will awaken a sense of wonder and awe for the natural world and create excitement about scientific discovery for all visitors and generations to come.”

The special exhibition Beautiful Creatures, curated by jewelry historian Marion Fasel, presents some of the world’s most spectacular jewelry pieces inspired by animals, with imaginative designs by the world’s great jewelry houses and artisans—from Cartier’s iconic panthers to Suzanne Belperron’s butterflies. The sparkling pieces on view range in date from the mid-19th century to the present. Displays are arranged into the categories of animals observed in the air, water, and land.

With exhibits that support New York State and national science education standards, the halls will serve as a vital resource for school and camp groups, educators, and graduate students in the Museum’s Master of Arts in Teaching program, which provides a specialization in Earth science for teachers of grades 7 through 12. Through interactive exhibits, including a dynamic periodic table of elements that allows visitors to “make minerals,” outstanding specimens, and media, the halls will explore the fundamentals, from what constitutes a mineral to how many “evolved” on Earth.

The halls have undergone renovation as part of the physical and programmatic initiatives undertaken in conjunction with the 150th anniversary celebration of the Museum, which was founded in 1869. These projects will culminate in the opening of the Richard Gilder Center for Science, Education, and Innovation, a major new facility that will house exhibition galleries, education spaces, and collections.

The Mignone Halls of Gems and Minerals are curated by George E. Harlow, curator in the Museum’s Division of Physical Sciences. The halls are designed by Ralph Appelbaum Associates with the American Museum of Natural History’s award-winning Exhibition Department under the direction of Lauri Halderman, vice president for exhibition. Marion Fasel is guest curator for the Beautiful Creatures exhibition.

The Museum reopened to the public on September 9, following the longest closure in its 150-year history, with new protocols instituted to protect the health and safety of visitors. The Museum is open Wednesday-Sunday, from 10 am to 5:30 pm, and attendance is limited in the building to 25 percent of normal visitation to allow ample room for physical distancing. Facial coverings are required for all staff and visitors ages 2 and up. Advance ticket reservations are required and can be made at amnh.org or through the Museum’s Explorer app.

Allison and Roberto Mignone Halls of Gems and Minerals

Generous support has been provided by Melissa and Keith Meister, the Arthur Ross Foundation, and Kenneth C. Griffin.

Additional support has been provided by the John & Amy Griffin Foundation and the City of New York.

With deepest appreciation, the Museum acknowledges Kathryn W. Davis for her generous founding support of the Master of Arts in Science Teaching (MAT) Program. Leadership support for the MAT program is provided by The Shelby Cullom Davis Charitable Fund.

Generous support has been provided by the Bezos Family Foundation.

Additional support has been provided by The Rice Family Foundation and Nancy B. and Hart Fessenden.

Joe Kleimanhttp://wwww.themedreality.com
Raised in San Diego on theme parks, zoos, and IMAX films, InPark's Senior Correspondent Joe Kleiman would expand his childhood loves into two decades as a projectionist and theater director within the giant screen industry. In addition to his work in commercial and museum operations, Joe has volunteered his time to animal husbandry at leading facilities in California and Texas and has played a leading management role for a number of performing arts companies. Joe previously served as News Editor and has remained a contributing author to InPark Magazine since 2011. HIs writing has also appeared in Sound & Communications, LF Examiner, Jim Hill Media, The Planetarian, Behind the Thrills, and MiceChat His blog, ThemedReality.com takes an unconventional look at the attractions industry. Follow on twitter @ThemesRenewed Joe lives in Sacramento, California with his wife, dog, and a ghost.
Share
Facebook
Twitter
Linkedin
Email
Print
WhatsApp
Pinterest
ReddIt
Tumblr
Previous articleCAVU Designwerks introduces Quest modular walkthrough ride
Next articleAVIXA and Digital Signage Federation announce D=SIGN: the Digital Signage Conference