“Are you guys crazy?” 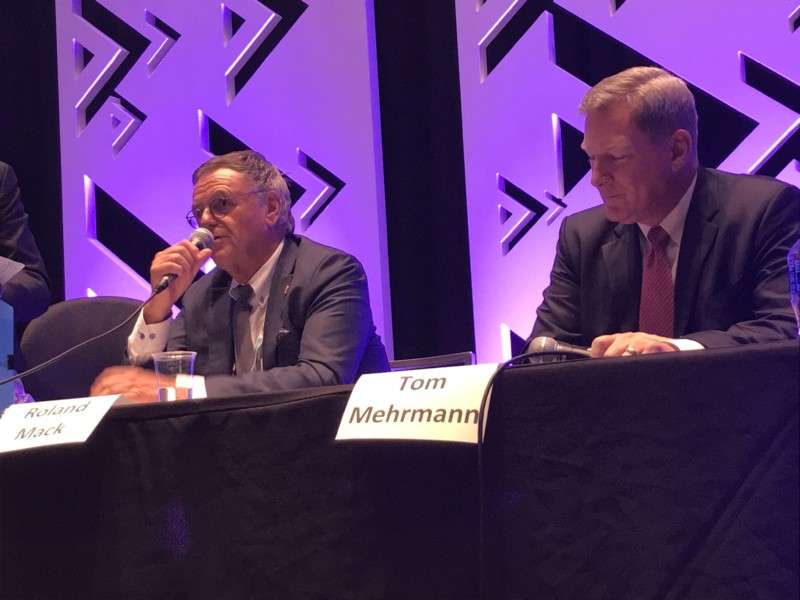 For a number of years, it’s been an annual highlight of the IAAPA Attractions Expo in Orlando to enjoy the annual Legends Panel curated by Bob Rogers of BRC Imagination Arts, giving us all a chance to hear from and appreciate some of the best and brightest in the world of themed entertainment design and attraction management. Rogers, of course, is a legend in his own right – a former Walt Disney Imagineer whose credits include the film in Epcot’s France pavilion. The Founder, Chair, and Chief Creative Officer of BRC Imagination Arts, Rogers is also recipient of the TEA’s Buzz Price Thea Award recognizing lifetime achievement, and inductee in the IAAPA Hall of Fame.

The 2018 Legends panelists were Roland Mack, owner of Mack Rides and Europa-Park, and Tom Mehrmann, former CEO of Ocean Park Hong Kong and the new President and General Manager of Universal Studios Beijing Park and Resort. Prior to Ocean Park, Mehrmann had been an executive with Knott’s Berry Farm, opening Knott’s Camp Snoopy at Mall of America, and Vice

President and General Manager for a number of Six Flags parks and for Warner Bros. Movie World Madrid.
This year, the Legend’s Panel centered on ways that attraction designers and operators can reach across international divisions to attract, charm and unite visitors from different cultures. Rogers began by encouraging those in attendance to learn more about the panelists through the recent biography Roland Mack: King of Fun and Mehrmann’s new book Taming the Mouse, both available online.

One of the key points brought up with both panelists was how they dealt with the world’s largest and most popular theme park company, Disney, entering their respective markets in Europe and Hong Kong. At the time of Disneyland Paris opening in 1992, Europa-Park had been in operation in Germany for 17 years. In a similar situation, Hong Kong Disneyland became the new kid on the block when it opened in 2005, competing against the nearby Ocean Park, founded in 1977.

Mack started out by mentioning how close Disneyland Paris is to Rust, Germany, the home of Europa-Park. “We first heard it was going to be in Barcelona and we were ok with that,” he said, “But when we heard that it was not going to be in Barcelona, we were less happy. Disneyland Paris is only one hour and 40 minutes from Europa-Park by the TGV train. When the park opened, we changed our product heavily.” Rather than succumb to the larger theme park operator, Mack discovered that he could learn from the trials and tribulations it went through, including employment, attendance and financial struggles during Disneyland Paris’ first few years of operation. “It’s been beneficial for us to keep the competition around,” he said.

Mack went on to point out that European customers to his park love European culture, and that the park has succeeded by working to unite its customer base by concentrating on shared likes and desires.

Mehrmann moved to Hong Kong in 2004 when he was recruited from Warner Bros. Movie World Madrid to oversee Ocean Park. “I was recruited because Disney was coming into Hong Kong,” he said, “Which is kind of funny because I was rejected by Disney when I applied with the company at age 17. Disney’s arrival made the government want to improve the quality of our park. We decided to focus on values that made us who we are – not to compete.” The strategy has shown strong results over time, with Ocean Park attendance only half a million less than that of Hong Kong Disneyland (5,800,000 and 6,200,000, respectively, according to the 2017 TEA/ AECOM Theme Index; in the same edition, Europa-Park attendance is given at 5,800,000 and Disneyland Paris at 9,660,000).

“We were ‘distinctively Hong Kong, uniquely Ocean Park,'” Mehrmann said, “while Disney is an American entertainment offering that’s adapted on a local basis.” Mehrmann saluted his successor, Matthias Li, for being part of the team that devised the strategy and for maintaining it.

Under Mehrmann’s leadership, the park tapped into the collective memory of its guests for the park’s significance in their lives. Hong Kong culture is rooted in generational values, around which the park developed a unique offering to increase attendance – free admission on birthdays. The result was a significant increase at the gate. 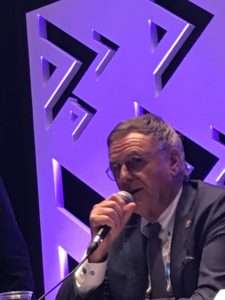 Rogers asked the panelists about something he observed in the early years of Epcot, to the effect that visitors tend to be most sensitive to stereotyping when it comes to how their own countries are represented, and less so in regard to others – it’s up to the operator to strike a balance. “Visitors from Canada did not enjoy the outfits the Canadian staff wore, but they loved the German outfits,” said Rogers. He asked how a park can deliver on a cultural archetype, such as with costumes, theming, or architecture, without stereotyping a culture.

Mack shared that Europa-Park succeeds by the way it creates atmosphere, using architecture characteristic of the 15 European countries represented in the park. “But it’s important to remember,” he cautioned, “that you can never beat the original.” A theme park version of the Eiffel Tower, for example, won’t top the real thing in Paris.

Mehrmann discussed the transformation of Halloween festivities at Ocean Park. During the first two years of the event, which was introduced in 2001, the park ran a traditional Halloween event. “For the third year,” he said, “we added a local folklore character. By the fourth year, everything was fresh and new,” he said, with an emphasis on traditional Chinese folklore. The Halloween Bash is now a combination of traditional Chinese and Western scares, utilizing the latest technologies. Annually, over 500,000 people attend the event each year.

Rogers then followed by asking what issues they had experienced and learned from at their parks. Interestingly, both panelists responded with examples concerning food. For Mack, it was surprise at the poor response to serving authentic food of the region in each zone. “We had to come back to schnitzel,” he shared. “There might be differences in culture. 45% of our visitors are German.” He further observed, “Italians are afraid to ride coasters, but they’ll try the prototypes in our park. We all speak one language – fun & love.”

For Mehrmann, the first item on the agenda is to hire an executive chef right away. “When I joined the company, the food at Ocean Park was being handled by a third party – Maxine’s. We took the F&B in-house and were able to offer authentic, quality food, and set the price.”

Mehrmann experienced first-hand what happens when one underestimates one’s competition. When he was with Warner Bros. Movie World Madrid, he said that he and his management discounted the other theme park in Madrid, Parques des Attraciones, whose parent company, Parques Reundios, ended up purchasing the Warner Bros. park. When he came to Hong Kong, he says, “Disney discounted Ocean Park.” Now in Beijing, preparing to open Universal’s first resort in Mainland China, he said that he’s learned not to discount the local competition, such as OTC. “Don’t be too proud or arrogant,” he said.

Coming back to roller coasters, Mack related an irony of business regarding the “Time Traveler” roller coaster, which combines spinning cars with multiple launches. “My biggest problem is that it’s one of the best rides Mack Rides created and it’s at Silver Dollar City, not EuropaPark.” 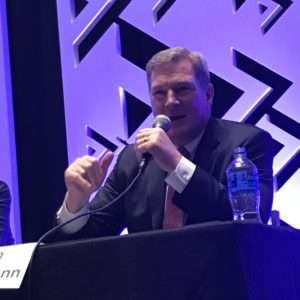 Rogers asked the panelists about using licensed IP versus creating their own IP that caters to the local culture. Mehrmann related that with IP, it’s important not to call licensing people, whose job is to obtain money for issuing the license, but rather to call promotional people, who know what will work best in a market and how best to promote the product. For Mack, “The entire Europa-Park is IP.”

Referring to the Universal Beijing Resort now in the making, Mehrmann shared that “IP has resonated in China for some time. We have an advantage that in the park, we’re not stuck in any particular history, other than Universal’s 100+ year legacy.”

Mack too realizes the importance of cinema IP, having utilized filmmaker Luc Besson to pull in attendance from the French market with attractions themed around Besson’s Arthur and Valerion films.

Rogers asked each of the panelists what the best leadership advice was they could give. For Mack, it was a message of self-sufficiency: “Don’t ask things from other people that you can’t get [achieve] on your own.”

The fire and the riot

Rogers asked the panelists about how certain crises had been dealt with at their individual parks. He asked Mack about the recent fire at Europa-Park that ignited during operating hours, destroying an entire themed area and a popular dark ride. Rogers wanted to understand how the efforts of the park’s employees resulted in the park reopening 24 hours later. He commended the park’s staff for their remarkable effort, leading the audience in a round of applause.

“This fire was our biggest fear. But we have a wonderful relationship with our employees. Everyone came in without asking to help with the cleanup. It was amazing. We had around 28,000 people in the park that day and none were harmed,” said Mack.

On the so-called “Umbrella Revolution” – public demonstrations against Mainland China’s involvement in Hong Kong politics – Mehrmann related how “it created a massive disruption and disrupted visitation to Hong Kong.” Equally troubling is the fact that Ocean Park has a major animal component and the protests hindered some food deliveries for the animals. In order to bypass the blocked roads, some staff, including animal caretakers, remained at the park overnight to ensure the animals were taken of and guests would be welcomed in the morning. As a result of the “Umbrella Revolution,” Mehrmann said, “we had to create new controls for dealing with such situations in the future.”

Considering everything the panelists had shared about the challenges, surprises and risks that are part of the job of operating their parks in unique markets with international guests, Rogers ended the session by asking, with a smile, a single question: “Are you guys crazy?”

Mack told the audience, “I am crazy – crazy for being passionate and caring. There’s always a use for something. I’ve never, ever seen something so bad that it could not be good for something else. Most important, work for me is fun.”

Mehrmann also admitted to being “crazy,” in the sense that he’s “curious, have a sense of humor, a sense of adventure, and like to do new things. I’m always on the lookout. Jim Pattison once said, ‘Opportunity doesn’t make a reservation.’ So I seek and pursue opportunities, knowing that luck is the residue of design.”

Roland Mack: King of Fun is available in hardback and e-book from http://shop.europa-park.de

Tom Mehrmann’s new book, Taming the Mouse, is available in hardback, paperback, and e-book from a variety of online booksellers. • • •

Joe Kleimanhttp://www.themedreality.com
Raised in San Diego on theme parks, zoos, and IMAX films, Joe Kleiman would expand his childhood loves into two decades as a projectionist and theater director within the giant screen industry. In addition to his work in commercial and museum operations, Joe has volunteered his time to animal husbandry at leading facilities in California and Texas and has played a leading management role for a number of performing arts companies. Joe has been News Editor and contributing author to InPark Magazine since 2011. HIs writing has also appeared in Sound & Communications, LF Examiner, Jim Hill Media, and MiceChat. His blog, ThemedReality.com takes an unconventional look at the attractions industry. Follow on twitter @themedreality Joe lives in Sacramento, California with his fiancé, two dogs, and a ghost.
Share
Facebook
Twitter
Linkedin
Email
Print
WhatsApp
Pinterest
ReddIt
Tumblr
Previous articleOceaneering’s trackless vehicles become self-driving as well
Next articleIAAPA Expo 2018 roundup