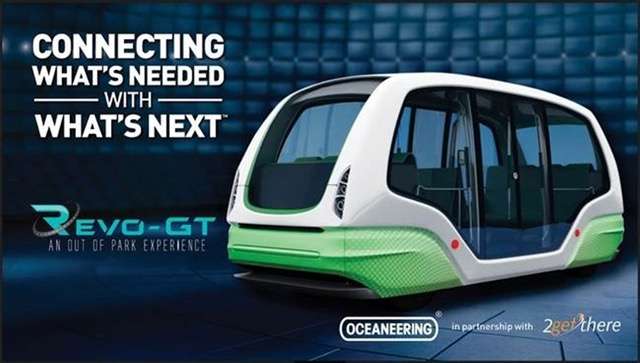 Parking lots, campuses and zoo tours are target markets for the        REVO-GT™

Out in the non-attractions world, Google and others are working to perfect the first self-driving car. Meanwhile, Oceaneering Entertainment Systems appears to have quietly mastered the challenge – illustrating that the attractions industry continues to be a great creative and tech incubator.

Specializing in vehicles for visitor attractions, Oceaneering Entertainment is part of Oceaneering, a global provider of engineered services and products with markets in offshore energy defense and aerospace.

The new trackless self-driving vehicle, the REVO-GT™, had its world premiere in November 2018 at the IAAPA Attractions Expo in Orlando. Oceaneering describes the REVO-GT™ as an “automatic guided vehicle for transit applications.” The first vehicles are scheduled to start shipping in 2019.

The REVO-GT™ builds upon the company’s existing Tru-Trackless REVOLUTION™ technology, featuring self-powered AGVs (automated guided vehicles) designed for use in dark rides and theme parks, with no need for tracks. Over the past few years, REVOLUTION™ technology has been recognized with a TEA Thea Award and installed in a number of theme park attractions.

For REVO-GT™, Oceaneering added high-tech extras and set parameters for a self-driving vehicle that will be used only in situations with controlled or semi-controlled traffic.

“The guidance system is the same as for REVOLUTION™, our trackless AGV ride vehicles,” said Bill Bunting, director of business development for Oceaneering Entertainment Systems. He explained that that REVOLUTION’s technology has been used on Antarctica: Empire of the Penguin at SeaWorld Orlando, and also at Justice League: Warworld Attacks in Warner Bros. World Abu Dhabi. It has also been customized to create proprietary rides for some of the largest theme park companies in the world. 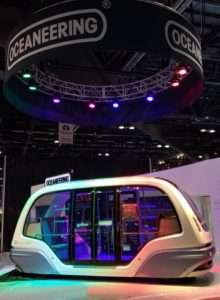 Oceaneering’s immediate aim is to see REVO-GT™ used as transportation in attractions parking lots, replacing buses and trams, for example. They also foresee placement in college campus, hospital campus and airport parking lots. But there’s no telling how else these vehicles might be adapted in future years, and they’re designed for versatility.

A sleek, 24-passenger, climate-controlled prototype vehicle with large windows, the REVO-GT™ takes a step into the future. Nearly 20 feet long, 6.89 feet wide and 9.19 feet tall, the spiffy-looking transporter can move forwards and backwards. It’s trackless, following a programmed route, as REVOLUTION™ vehicles do. “We tell it where we want it to go, then it navigates itself following those directions,” Bunting explained.

According to Bunting, a train of REVO-GT™ cars can start out on a path together, then break off to go in different directions, with pre-sets for route, speed, direction and path, and the option to change those to meet demand. “They can either be set to run in an automode, using a series of pre-programmed point-to-point routes with multiple stops along the way, or can be set to take passenger inputs to select only those stops that they need to us,” Bunting said. “On a campus environment, for example, the vehicle would have multiple paths pre-programmed connecting every possible stop. In guest-select mode, any guest boarding could select any stop, and the RV would pick the most efficient route to that stop. This is typically used when demand is low. In high demand, the auto-mode would be used and the RV would take a route that hit multiple stops, much like a bus service.”

The REVO-GT™ has several safeguards built into its operational system. First, the operator programs the route, just as in a trackless theme park ride. “We tell it where we want it to go, then it navigates itself following those directions,” Bunting explained. The vehicle checks its own position 50 times every second. Simultaneously, a builtin guidance system uses proprietary software to count rotations of the wheel, which indicates how far the vehicle has traveled. “This dead reckoning system adjusts for turning of the wheel,” Bunting said. In addition, nickelsized, silicone-coated magnets underground confirm the route. “The system is saying, ‘I’m supposed to be here,’” Bunting said. “It’s the same as if you drive a car from Orlando to Denver. You turn on your GPS or follow a map, yet every so often you peek at a road sign to make sure you’re not going to Cleveland.”

Meanwhile, a control center, involving a master computer and a live person, monitors all the vehicles at a location from a traffic perspective, looking for anomalies or possible hazards. The REVO-GT™ can sense objects, or people, coming toward it and will stop in response.

While the standard REVO-GT fits 24 passengers, eight seated and 16 standing, Oceaneering will scale it down upon request. “A smaller vehicle can fit five or six passengers, and we refer to that as a PRT for Personal Rapid Transit,” Bunting said. The REVO-GT™ drives at up to 37 miles per hour, and charges automatically at every stop via a charging system implanted in the ground that sends a current to the battery. “It can go up to 50 kilometers on one charge,” Bunting said, noting that the battery rarely falls below a 90 percent charge. Audiovisual elements can be integrated as well. •