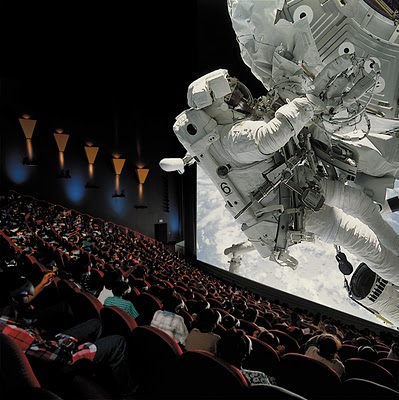 Under the 7-year agreement, Barco will be IMAX’s exclusive worldwide partner in the development of digital projection technology for use in IMAX theatres. As part of the partnership, the companies will collaborate to co-develop cutting-edge, next-generation laser projection technology based on IMAX intellectual property in image quality, Barco’s unique laser innovations and the Kodak digital laser patents, which IMAX will sub-license to Barco.

In the first phase of the partnership, the parties will integrate an enhancement of Barco’s existing Xenon-based projectors for use in IMAX’s current backlog and new system signings. This solution will be available in the second half of 2012. Simultaneously, Barco and IMAX will co-develop leading-edge laser technology.  The companies will work together exclusively to manage the transition from Xenon-based to high-performance, laser-based projectors, which are expected to be deployed in 2013.

“As we continue to expand globally, it is critical that our technology partner keep pace with our ambitions around innovation and growth,” said IMAX Chief Business Development Officer Robert D. Lister. “Barco is that partner. A leader in advanced digital and laser technology, Barco is well-known for its quality and integrity. We believe the result of this collaboration will further differentiate The IMAX Experience® for consumers, strengthening our value proposition for studios and exhibitors.”

“We are honored to have been selected by IMAX as their worldwide and exclusive digital cinema technology partner,” said Wim Buyens, Senior Vice President of Barco’s Entertainment Division. “Together, we are committed to bringing the full weight of our operational excellence, integrity, and ability to deliver cutting-edge technology to bear in order to redefine the movie-going experience.”

Todd Hoddick, Vice President for the Barco Entertainment Division in North America, adds: “We are honored to have been selected by IMAX as their worldwide and exclusive digital projection technology partner. We are both excited and committed to bring the full weight of Barco’s operational excellence, integrity and ability to deliver on the ideals of the IMAX brand. Together we are determined to redefine the immersive cinema experience.”

Barco, a global technology company, designs and develops visualization products for a variety of selected professional markets. Barco has its own facilities for Sales & Marketing, Customer Support, R&D and Manufacturing in Europe, North America and Asia Pacific. Barco (NYSE Euronext Brussels: BAR) is active in more than 90 countries with about 3,500 employees worldwide. Barco posted sales of 897 million euro in 2010. www.barco.com
ABOUT IMAX CORPORATION
IMAX Corporation is one of the world’s leading entertainment and technology companies, specializing in the creation and delivery of premium, awe-inspiring entertainment experiences. With a growing suite of cutting-edge motion picture and sound technologies, and a globally recognized entertainment brand, IMAX is singularly situated at the convergence of the entertainment industry, innovation and the digital media world. The industry’s top filmmakers and studios are utilizing IMAX theatres to connect with audiences in extraordinary ways, and as such, the IMAX network is among the most important and successful theatrical distribution platforms for major event films around the globe. The Company’s new digital projection and sound systems – combined with a growing blockbuster film slate – are fueling the rapid expansion of the IMAX network in established markets such as North America, Western Europe, and Japan, as well as emerging markets such as China and Russia. IMAX theaters deliver the world’s best cinematic presentations using proprietary IMAX®, IMAX® 3D, and IMAX DMR® (Digital Re-Mastering) technologies. IMAX DMR enables virtually any motion picture to be transformed into the unparalleled image and sound quality of The IMAX Experience®. www.imax.com www.imax.com

Joe Kleimanhttp://wwww.themedreality.com
Raised in San Diego on theme parks, zoos, and IMAX films, Joe Kleiman would expand his childhood loves into two decades as a projectionist and theater director within the giant screen industry. In addition to his work in commercial and museum operations, Joe has volunteered his time to animal husbandry at leading facilities in California and Texas and has played a leading management role for a number of performing arts companies. Joe has been News Editor and contributing author to InPark Magazine since 2011. HIs writing has also appeared in Sound & Communications, LF Examiner, Jim Hill Media, and MiceChat. His blog, ThemedReality.com takes an unconventional look at the attractions industry. Follow on twitter @ThemesRenewed Joe lives in Sacramento, California with his fiancé, two dogs, and a ghost.
Share
Facebook
Twitter
Linkedin
Email
Print
WhatsApp
Pinterest
ReddIt
Tumblr
Previous articleTREND: Napoleon
Next articleEuro Disney Q1 2012 Financials