2012 marks the 200th anniversary of the War of 1812, where Napoleon’s troops invaded Russia.  On September 7, the Battle of Borodino took place, leading to the French entry into Moscow.  This year will mark the largest modern reenactment on the battlefield, where 70,000 men lost their lives in a single day.

In 1837, Tsar Nicholas II built a palace at the battlefield to mark the 25th anniversary.  The palace contained a museum and later was used as a military hospital.  In 1942, it was blown up by invading German forces, leaving only the foundation.  The Russian government has been rebuilding the palace for the 200th anniversary and plans to reopen it to the public on September 7.

Additional commemorative events will be taking place in Moscow.  On March 22, the Osipov National Folk Instruments Orchestra accompanied by the Schvesnikov State Academic Russian Choir, will perform a selection of numbers chosen for the anniversary, including the 1812 Overture, written by Tchaikovsky to commemorate the Battle of Borodino.  The concert will take place in Moscow’s Tchaikovsky Concert Hall.

The 1812 Panorama Museum houses the 1912 painting by Franz Roubaud and a number of displays about the war.  The painting, similar to the Cyclorama paintings in Atlanta and Gettysburg, uses physical props in the foreground to create a sense of three dimensional distance.  The panoramic painting has been undergoing restoration and new props and effects are being added.  It will reopen to the public, along with new museum exhibits, in March. 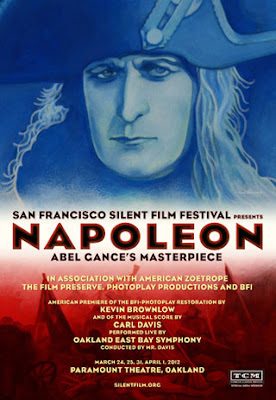 Starting on March 24, the San Francisco Silent Film Festival will present the US Premiere of Abel Gance’s 1924 classic silent film Napoleon at the historic Paramount Theater in Oakland, CA, USA.  There will only be four performances of this 5 1/2 hour film.  The main portion of the presentation will be presented in 35mm.  The finale of the film uses a technique called “Polyvision,” where the screen is tripled in size by adding an additional screen on each side.  Three projection booths will be utilized, each with a 35mm projector synched to the other two (akin to Cinerama).

The film’s restoration was overseen by Kevin Brownlow of Photoplay Productions with the assistance of the BFI.  Carl Davis will conduct the Oakland East Bay Symphony in a live performance of his original score.  The projection system is being provided by Boston Light & Sound (Terminator 2: 3D), with Chris Reyna (Back to the Future: the Ride, USA Pavilion at Expo 84) serving as Technical Director.

Yves Jégo, Mayor of Montreau, recently proposed a theme park and resort centered around Napoleon.  Here is his vision, translated from the original French:

“During your stroll, you visit the streets of Parisian intellectuals, get a taste of imperial waltzes in Vienna, the carnival of Venice, the snows of Moscow, Cairo, London …


“Ships are in port so you can browse both the Thames, the Seine or the Venetian canals.

“You discover these in the Enlightenment: hotels, shops, restaurants, convention center …

“According to your desire, you can have a drink, a meal on the terrace or beside the water.

“You can browse the Avenue of Crafts and enjoy international handicrafts.

“Then you will stop on the esplanade of the Musee Napoleon to find unique culture and science, dedicated to the Napoleonic era and the crucial years of the French Revolution, the Consulate and the Empire.

“You will then arrive at the gates of “Bivouac of Montereau,” a family amusement park, both historic and digital, on the site of the Battle of 17 & 18 February 1814.

“You will relive the last days of the Bastille and be released July 14. You will attend the King’s death.

“Then discover the splendor of the Empire, be the witness of the coronation of the Emperor at Notre Dame de Paris and watch the Empress’ Ball. The table is set as to accommodate all the emperors of history.

“Here you are in Egypt amid a sea of sand which passes the Bedouins. You are with Bonaparte at the foot of the pyramids. Do not be afraid of the dark, down in the Great Pyramid with its labyrinths, go in search of the secret room that leads to treasures of the Pharaohs.

“While the Battle of Trafalgar rages on the surface, to escape the chaos you will dive in search of shipwrecks. You will be able to admire the thousands of living species that inhabit our oceans.

“Caribbean Josephine welcome you with their colorful birds in the middle of incredible vegetation. After visiting a plantation maintained by many slaves, you will live the adventures of the pirates of the Caribbean and ride down the slopes of a smoldering volcano.

“Slide on the slopes of the St. Bernard Pass, pass the Beresina in the middle of frozen bodies of soldiers and horses. You are at the gates of Moscow: dress warmly, put on your skis or take a sled to slide down through the middle of veterans on the snowy battlefield.

“Join Us in the imperial armies to penetrate the heart of the battlefields of Austerlitz or Waterloo. Hear the sound of shattering guns, shudder, feeling the wind whistling in your ears, breathe in the smell of gunpowder and enjoy the coolness of Napoleon.

“Experience the return from Elba, and the ashes in 1840. Paris in the nineteenth century, the old veterans and enthusiastic people accompany the memory of the Emperor to be final resting place.

“Before returning to the twenty-first century do not miss the sun of Austerlitz or the big parade that combines imperial soldiers, officers, marshals, before their martial bearing all the nobility of Europe.”

Joe Kleimanhttp://wwww.themedreality.com
Raised in San Diego on theme parks, zoos, and IMAX films, InPark's Senior Correspondent Joe Kleiman would expand his childhood loves into two decades as a projectionist and theater director within the giant screen industry. In addition to his work in commercial and museum operations, Joe has volunteered his time to animal husbandry at leading facilities in California and Texas and has played a leading management role for a number of performing arts companies. Joe previously served as News Editor and has remained a contributing author to InPark Magazine since 2011. HIs writing has also appeared in Sound & Communications, LF Examiner, Jim Hill Media, The Planetarian, Behind the Thrills, and MiceChat His blog, ThemedReality.com takes an unconventional look at the attractions industry. Follow on twitter @ThemesRenewed Joe lives in Sacramento, California with his wife, dog, and a ghost.
Share
Facebook
Twitter
Linkedin
Email
Print
WhatsApp
Pinterest
ReddIt
Tumblr
Previous articleVIDEO UPDATE: TurtleTrek, SeaWorld Orlando
Next articleBarco Chosen as Exclusive Digital Cinema Technology Partner by IMAX