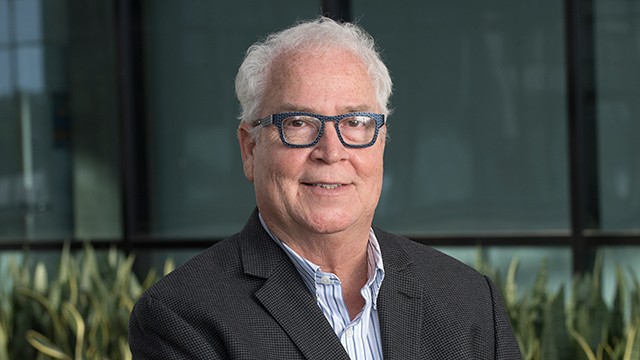 Bob Weis arrived at Cal Poly Pomona as a freshman pursuing a theater degree. A professor’s praise of his design skills inspired Weis to shift his focus and pursue a degree in architecture.

Throughout his career, Weis (‘80, architecture) has combined architecture with disciplines ranging from art to engineering to create some of the world’s most remarkable theme parks. He has achieved tremendous success in his industry, helping bring Disney stories to life and build one of the most iconic brands in the world, touching many lives along the way.

“Since graduating from the College of Environmental Design in 1980, this proud alumnus has demonstrated innovation, technology and creative imagination in design,” said University President Soraya M. Coley. “His work has resulted in entertaining and bringing joy to millions of Disney visitors around the world.”

In recognition of Weis’ accomplishments, the many contributions to his industry, and the respect he has garnered in his field, the Board of Trustees of the California State University and Cal Poly Pomona are proud to confer upon Bob Weis the honorary degree of Doctor of Humane Letters. The Honorary Doctorate presentation and Weis’ message to graduates were shared via video at the College of Environmental Design drive-in commencement ceremony on May 21.

Among his many award-winning projects, Weis has overseen the creative and design development of Shanghai Disney Resort, the opening of Tokyo Disneyland – the first international Disney theme park – and the five-year transformation and expansion of Disney California Adventure Park, in Anaheim.

“There’s a great Walt Disney quote that we love so much here, which is: ‘It’s kind of fun to do the impossible,’” Weis said. “We have people here who are scientists and writers and artists and sculptors and such a wide range of engineers. If you can put those folks in a room and really let them imagine…they’ll come up with great things. And then it’s our job to figure out how to do them.”

Each year Weis and other Imagineers volunteer their time to interact with architecture and landscape architecture students through the Bobby Brooks Memorial Interdisciplinary Design Studio at Cal Poly Pomona. The program, established in honor of alumnus Bobby Brooks, a friend and fellow Imagineer who died in 2008, initiates visits from Disney representatives to meet with Cal Poly Pomona students, review their projects and collaborate with them. It’s an endeavor with deep meaning for Weis and one of the many ways he gives back to his alma mater.

Given his ongoing connection to Cal Poly Pomona students, Weis has a message particularly relevant to those navigating the COVID-19 pandemic.

“Today you face challenges that no one could have imagined when you entered school. And yet, I envy you,” Weis said. “No temporary setbacks, no matter how serious and grave, will hold you back from your tremendous talent, idealism, global mindset, and technological sophistication. Yes, I envy you because all the best is ahead of you.”