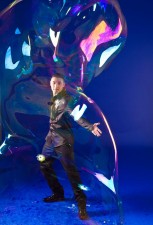 Bubblefest, the Science Center’s most popular annual event is designed to help visitors appreciate and understand the scientific principles and mathematics of bubbles, and to let them explore the world of bubbles in a fun, hands-on environment. At the science learning stations, guests can create a bubble mini-wall, bubble domes and much more, while learning about math and science principles like surface tension, elasticity, air pressure, and geometry.

This year’s Bubblefest will be the biggest and most impressive outdoor festival in the Center’s history. With an inflatable play zone, water spheres, and interactive science zones Bubblefest is truly fun for the entire family. “Me in a Bubble” offers the opportunity for guests to step inside a giant bubble and have their picture taken.

And if that’s not enough fun, guests will need to bring an appetite, because some of the top gourmet food trucks in Southern California will be in attendance during the three week festival. Guests can chow down on delicious food from Dogzilla Dogs, Lobsta Truck, Lee’s Philly, Calbi Truck, The Lime Truck and many more. In addition, Orange County’s own Zov’s Bistro/Café will add to the experience as they serve selections of their mouth-watering Mediterranean cuisine.

ABOUT DENI YANG
Deni Yang has been combining entertainment, art and science performing in bubble shows for the most of his young life. Following in the footsteps of his parents Fan and Ana Yang, Deni has entertained audiences around the world with his marvelous stage performances. His first live appearance was at the age of four on RAI 1 Italian Television where he fascinated millions of viewers across Europe. It was the beginning of what would eventually bring Deni international acclaim at the Monte Carlo International Circus Festival (Monaco) in 1997, where he solidified his career as a bubble artist.

Deni has toured the globe with his spectacular stage show and has been featured at the National Museum of Science and Technology (Ottawa, Canada) and the Pacific Science Centre (Seattle, WA). He has also made numerous appearances on television shows around the world in Italy, Greece, France, and USA. Most recently Deni starred in the “White Bubble Show” in Seoul, Korea.

ABOUT DISCOVERY SCIENCE CENTER
Discovery Science Center is Orange County’s leading destination for hands-on science fun with over 100 interactive science exhibits throughout the Center. Take the Eco Challenge and become a green superhero, feel the power of a real rocket engine “launch” and explore the inner workings of a two-story tall dinosaur! Traveling exhibits and annual events such as Spooky Science and Science of Gingerbread throughout the year ensure that there is always something new to discover.

Joe Kleimanhttp://wwww.themedreality.com
Raised in San Diego on theme parks, zoos, and IMAX films, InPark's Senior Correspondent Joe Kleiman would expand his childhood loves into two decades as a projectionist and theater director within the giant screen industry. In addition to his work in commercial and museum operations, Joe has volunteered his time to animal husbandry at leading facilities in California and Texas and has played a leading management role for a number of performing arts companies. Joe previously served as News Editor and has remained a contributing author to InPark Magazine since 2011. HIs writing has also appeared in Sound & Communications, LF Examiner, Jim Hill Media, The Planetarian, Behind the Thrills, and MiceChat His blog, ThemedReality.com takes an unconventional look at the attractions industry. Follow on twitter @ThemesRenewed Joe lives in Sacramento, California with his wife, dog, and a ghost.
Share
Facebook
Twitter
Linkedin
Email
Print
WhatsApp
Pinterest
ReddIt
Tumblr
Previous articleSix Flags Announces Partnership with 7-Eleven
Next articleSeaWorld’s Brian Morrow talks about all the excitement for 2012