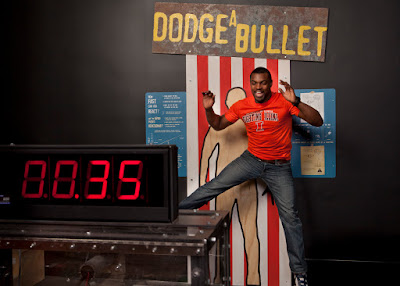 Chicago, IL, USA (March 14, 2012) /PRNewswire-USNewswire/ — The world premiere of MythBusters: The Explosive Exhibition—an interactive exhibit experience modeled after the Discovery Channel Emmy®-nominated series—opens at the Museum of Science and Industry, Chicago on March 15, 2012.

The exhibit was created by Discovery Communications and Exhibits Development Group, in partnership with the Museum of Science and Industry, Chicago and Geoffrey M. Curley + Associates. It will run at MSI through Sept. 3, 2012.

In the Discovery Channel TV series MythBusters, Adam Savage and Jamie Hyneman bring their expertise in special effects—along with co-hosts Tory Belleci, Grant Imahara and Kari Byron—to relentlessly bust or confirm myths through the scientific method. Co-hosts Adam and Jamie were heavily involved throughout the development of the exhibition to ensure guests receive a true MythBusting experience, but if you think you need to know the show to get into the exhibit action, that’s the first myth to bust. MythBusters: The Explosive Exhibition will show everyone—even MythBusting newbies—how to uncover the truth behind some of science’s popular myths and have a great time while doing it.

In the exhibit, guests learn about science myths, the MythBusters and what experimentation is all about by participating in a series of fun, hands-on experiences and live demonstrations.

Thursday, March 15, 2012 at 10:30 a.m. , the exhibit will officially open to the public at the Museum of Science and Industry, Chicago in true MythBusters style with a very unique ribbon-cutting ceremony—featuring all five of the show’s hosts including Adam Savage and Jamie Hyneman. Following the opening, from 11 a.m. – noon, all five of the show’s hosts will autograph cast photos.

Joe Kleimanhttp://wwww.themedreality.com
Raised in San Diego on theme parks, zoos, and IMAX films, Joe Kleiman would expand his childhood loves into two decades as a projectionist and theater director within the giant screen industry. In addition to his work in commercial and museum operations, Joe has volunteered his time to animal husbandry at leading facilities in California and Texas and has played a leading management role for a number of performing arts companies. Joe has been News Editor and contributing author to InPark Magazine since 2011. HIs writing has also appeared in Sound & Communications, LF Examiner, Jim Hill Media, and MiceChat. His blog, ThemedReality.com takes an unconventional look at the attractions industry. Follow on twitter @ThemesRenewed Joe lives in Sacramento, California with his fiancé, two dogs, and a ghost.
Share
Facebook
Twitter
Linkedin
Email
Print
WhatsApp
Pinterest
ReddIt
Tumblr
Previous articleSix Flags Announces Partnership with 7-Eleven
Next articleSeaWorld’s Brian Morrow talks about all the excitement for 2012