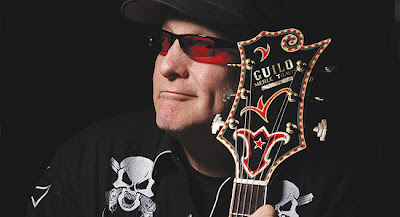 Rockford, IL, USA (May 21, 2012) /PRWEB/ — From JANE, the renowned 66 million year-old juvenile T.rex, to interactive exhibits of the earliest humans, Burpee Museum of Natural History continues to inspire and excite visitors of all ages.

Now, the world-famous “little museum that could” is about to prove it can rock and roll…

Rick’s Picks: A Lifelong Affair With Guitars & Musictells the story of Rick’s passions for guitars, music and Rock & Roll, revealing many surprises and secrets along the way.

Nielsen and his Cheap Trick bandmates (all Rockford, Illinois natives), continue extensive recording and touring to this day, and have amassed one of the longest-lived and most loyal international followings in rock history. They are about to embark on a summer tour with Aerosmith that has been named one of the hottest tickets of the year by Rolling Stone magazine. Rolling Stone also names Cheap Trick “one the coolest things about summer.”

Through Rick’s Picks’ video-enhanced multimedia experience, visitors will step into the mind and experience of one of music’s most enigmatic legends – Rick’s past, present and future; his guitars, his clothing, his amplifiers; travel documents and personal memorabilia, his sock drawer and his junk drawer.

Rick’s Picks will be enhanced by Nielsen’s own favorites of many of his celebrity musician friends’ collections, as well. Keep an eye out for future announcements regarding who will join Rick in his exhibit.

Nielsen, when asked what the exhibit means to him, had this to say, “It’s a lot more than just guitars. It’s my life. It’s perpetual motion, magic potions, evolutions, false conclusions, harmonic fusions, full color illusions, black and blue contusions, diffusions and delusions, late night seclusions, superstition and ambition, flights over oceans, shameless promotions, occasional demotions, sonic explosions, prepositions and compositions, traditions and transitions, collisions and decisions, expectations and exhilaration, havens and invasions, schemes, dreams and extremes, documentation and amplification, loving emotions conquering pre-conceived notions. It’s my story in guitars, music, video and all the stuff I’ve saved all these years: cracked open for all the world to see. Hope you come, hope you have fun, ‘cuz oh boy, this house’ll be rockin’.”

Alan Brown, Executive Director of Burpee Museum of Natural History, said, “We’re incredibly excited to bring this exhibit to fruition–it’s our goal as a museum and organization to inspire our visitors–and there is nothing more inspirational than Rick’s passion for guitars and music. It’s a rockin’ story and we know visitors of all ages will love it. Rick Nielsen and Cheap Trick are important threads in the fabric of Rockford’s history – and its future. We are grateful to Rick for his generosity in loaning his guitar and memorabilia collections to this exhibit and couldn’t be prouder to form this alliance.”

Rick’s Picks opens for preview tours for the media and special guests on August 10th, 2012, and to the general public on Saturday, August 11th, 2012 at Burpee Museum of Natural History, 737 North Main Street Rockford, IL 61103.


About Rick’s Picks
It’s Guitars. It’s Rick. It’s Music History. From Rockford, Illinois’ skating rinks to Tokyo’s Budokan, Rick’s Picks tells the 40-year story of one of the hardest-working stars in Rock & Roll. As one would expect, Rick has more stories that his five neck has strings. For more information, visit http://www.rickspickslive.com


About Rick Nielsen & Cheap Trick
When Cheap Trick burst onto the national music scene in the 1970s, it broke new ground with a punkish, hard-edged brand of literate garage rock that was the perfect antidote to what ailed weary FM radio listeners worldwide. Their uniquely midwestern sensibilities have been deftly recorded in 26 albums and laid bare in thousands upon thousands of performances worldwide. With walls of gold and platinum records to prove their enduring success, Cheap Trick and its pick-flinging, checkerboard-bedecked dynamo, melody machine Rick Nielsen has never stopped touring, much to the delight of one of rock history’s most loyal fan bases. http://www.cheaptrick.com Rick Nielsen, and bandmates Robin Zander and Tom Petersson can be seen touring with Aerosmith in major cities across north America this summer.

Joe Kleimanhttp://wwww.themedreality.com
Raised in San Diego on theme parks, zoos, and IMAX films, InPark's Senior Correspondent Joe Kleiman would expand his childhood loves into two decades as a projectionist and theater director within the giant screen industry. In addition to his work in commercial and museum operations, Joe has volunteered his time to animal husbandry at leading facilities in California and Texas and has played a leading management role for a number of performing arts companies. Joe previously served as News Editor and has remained a contributing author to InPark Magazine since 2011. HIs writing has also appeared in Sound & Communications, LF Examiner, Jim Hill Media, The Planetarian, Behind the Thrills, and MiceChat His blog, ThemedReality.com takes an unconventional look at the attractions industry. Follow on twitter @ThemesRenewed Joe lives in Sacramento, California with his wife, dog, and a ghost.
Share
Facebook
Twitter
Linkedin
Email
Print
WhatsApp
Pinterest
ReddIt
Tumblr
Previous articleMuseum of the City of New York Looks at History of NY Banking with New Exhibit
Next articleShambhala Sets New Coaster Height Record in Europe