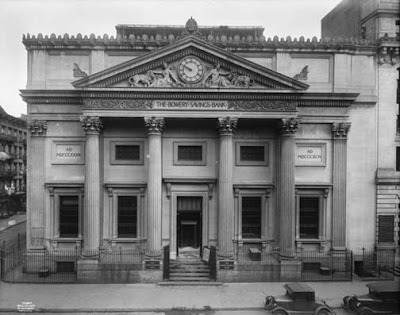 New York, NY, USA (May 21, 2012) /PRWEB/ — Capital of Capital: New York City Banks and the Creation of a Global Economy, a new exhibition opening at the Museum of the City of New York on May 22, 2012, charts the rise of the city’s banks from early sources of credit for local merchants to institutions that transformed New York City into a global financial center. The exhibition features historic documents and artifacts including 19th-century examples of bank-issued money, a 1922 predecessor to the ATM, and artifacts related to the 2008 fiscal crisis.

The exhibition explores more than two centuries of New York’s banking system, from the founding of the city’s first banks after the American Revolution to the city’s emergence as a leading global economic power. Along the way, the exhibition reveals how banks and the capital they amassed fueled growth of the city’s stock market, the development of new industries and made New York the nation’s banking center by the middle of the 19th century and the financial capital of the world in the early 20th century. Moreover, visitors will see how banks became intertwined with New York’s growing economy, changing with the city itself as it became larger, more influential, and more global in reach.

Capital of Capital unfolds in four sections, highlighting the innovations that gave each era its character – the bank-issued notes that served as the nation’s paper currency and made possible the mercantile economy of the pre-Civil War Era; the stocks and bonds that underwrote the nation’s investments in industry and infrastructure in the late 19th and early 20th centuries; the new tools of consumer credit and banking that became a growth industry in the middle of the 20th century, and the derivatives and securitized assets that fueled the booms and busts of the late 20th and early 21st centuries.

Susan Henshaw Jones, Ronay Menschel Director of the Museum, said, “This exhibition will demonstrate that the history of New York City’s banks is, unexpectedly, very exciting, filled with twists and turns, booms and busts, and the saga continues to the present day, with newspapers filled with debate over the future of the industry.”

Capital of Capital will give visitors insight into New York’s banking history and reveal how many of the issues facing the industry today resonate back to the very early days of the city and its banks. The exhibition will provide important historical context to the ongoing debate surrounding the availability of credit, the security of investments, and government’s role in the banking sector. Capital of Capital will also cover popular protests against the industry’s power and policies and the connection between New York City and the global economy.

The exhibition was made possible by a generous grant from Citi, which is funding the exhibit as part of its commemoration of its 200th anniversary year.

“Citi was founded on Wall Street in 1812, and we have called New York our home ever since as we have worked to support economic progress in our home city and beyond,” said Citi CEO Vikram Pandit. “During our 200th anniversary year, we are excited about supporting a timely exhibit which explores the banking industry’s role in transforming New York City into the financial capital of the world.”

Capital of Capital has been organized by an exhibition team led by Sarah M. Henry, the Museum’s Deputy Director and Chief Curator and Guest Curator, Prof. Brian P. Murphy of Baruch College, City University of New York, with Jessica Lautin, Andrew W. Mellon Postdoctoral Curatorial Fellow at the Museum of the City of New York.

Joe Kleimanhttp://wwww.themedreality.com
Raised in San Diego on theme parks, zoos, and IMAX films, InPark's Senior Correspondent Joe Kleiman would expand his childhood loves into two decades as a projectionist and theater director within the giant screen industry. In addition to his work in commercial and museum operations, Joe has volunteered his time to animal husbandry at leading facilities in California and Texas and has played a leading management role for a number of performing arts companies. Joe previously served as News Editor and has remained a contributing author to InPark Magazine since 2011. HIs writing has also appeared in Sound & Communications, LF Examiner, Jim Hill Media, The Planetarian, Behind the Thrills, and MiceChat His blog, ThemedReality.com takes an unconventional look at the attractions industry. Follow on twitter @ThemesRenewed Joe lives in Sacramento, California with his wife, dog, and a ghost.
Share
Facebook
Twitter
Linkedin
Email
Print
WhatsApp
Pinterest
ReddIt
Tumblr
Previous articleRWS and Associates Lights Up Cedar Point’s Nights
Next articleBurpee Museum Pulls a Cheap Trick With New Exhibit

Museum of the City of New York Finalist for $250,000 Preservation Grant