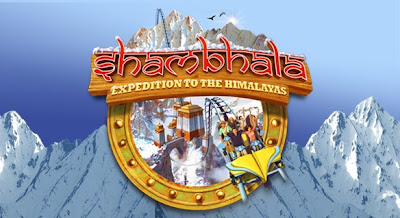 The inauguration started with the project’s presentation by Fernando Aldecoa, general manager of PortAventura, and Luis Valencia, project manager and main responsible for Shambhala. They both highlighted the fact that “the main sensation in Shambhala is joy and excitement”.

After the presentation, a spectacle of Shaolines monks welcomed the institutional delegation. Then, the President of the Generalitat cut the ribbon and, having tested Shambhala in the front row, recommended the experience to “all who loves thrills and excitement”. Later Artur Mas and the delegation walked through the surrounding area of the attraction, inspired in the Bhutan kingdom.

Some famous faces of Spanish society have also enjoyed the new attraction of the theme resort before it was opened to the general public, among many others the actors Santi Millán, Mónica Estarreado or Sara Ballesteros, football players like Julio Salinas and TV hostess like Luján Argüelles or José Corbacho.

The new roller coaster covers 14.000 m2 of the themed area, which is inspired en the culture of the Kingdom of Bhutan, one of the most isolated and unknown countries in the world. The new attraction takes the name of the mythical Shambhala, situated supposedly beyond the Tibet and that is considered to be an inaccessible paradise, a magic place of peace and wisdom.
The Shambhala’s structure modifies the skyline of the Park, dominated before by Dragon Khan, can be seen from several kilometers of the distance. This new symbol of PortAventura represents 3 European records: the highest attraction (76 m), the longest drop (78m) and the fastest hyper coaster (83 miles/hour).

The new roller coaster will have 5 camelbacks, one of them as high as a 7-floors building. The attraction will also have three trains, with 32 people capacity in each one, and the will be able to run at the same time.

With a €25 million investment, Shambhala is also one of the most ambitious initiatives of PortAventura since its opening in 1995. The route of the attraction is 1,650 m length, and for its construction 1,600 tons of steel were used in its structure, as well as 4,000 m3 of cement in its 18 meters deep foundations.

In its first weekend, more than 15,000 people have already tried Shambhala.

http://www.portaventura.co.uk/
Subscribe to InPark for FREE!
Submit your news

Joe Kleimanhttp://wwww.themedreality.com
Raised in San Diego on theme parks, zoos, and IMAX films, Joe Kleiman would expand his childhood loves into two decades as a projectionist and theater director within the giant screen industry. In addition to his work in commercial and museum operations, Joe has volunteered his time to animal husbandry at leading facilities in California and Texas and has played a leading management role for a number of performing arts companies. Joe has been News Editor and contributing author to InPark Magazine since 2011. HIs writing has also appeared in Sound & Communications, LF Examiner, Jim Hill Media, and MiceChat. His blog, ThemedReality.com takes an unconventional look at the attractions industry. Follow on twitter @ThemesRenewed Joe lives in Sacramento, California with his fiancé, two dogs, and a ghost.
Share
Facebook
Twitter
Linkedin
Email
Print
WhatsApp
Pinterest
ReddIt
Tumblr
Previous articleBurpee Museum Pulls a Cheap Trick With New Exhibit
Next articleWitt Lining and Stein Industries Refurbish Black Water Tanks on Queen Mary