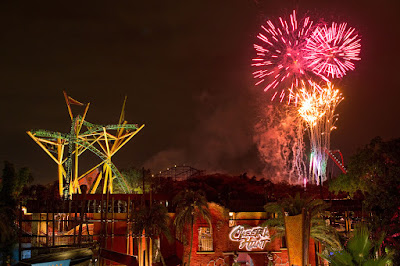 Tampa, FL, USA (December 4, 2012) — In 2012, Busch Gardens introduced guests to its biggest ice show ever with Iceploration and brought them closer to the animal care experience than ever before with the new Animal Care Center. Now, 2013 is bringing some of the biggest names in Latin and rock to Busch Gardens. It’s our best lineup yet, including music’s most memorable acts at Real Music, rock artists at Bands, Brew & BBQ, and Viva La Música’s hottest Latin performers.

Jack Hanna: May 18 & 19
Join “Jungle Jack” Hanna for two days of wild animal shows, autograph signings and special meet and greets when he visits Busch Gardens on May 18 and 19. The internationally-known animal expert will share animal facts and his travel tales during animal shows.

Summer Nights: June 8 – August 11
Finale fireworks are back each night of Summer Nights at Busch Gardens, along with an end-of-night show packed with energizing live musicians, singers, dancers and artists from around the world. Their thrilling performance – along with modern music and fire effects – will pump up the crowd every night in Gwazi Park. Adding to the amazing coasters-after-dark lineup, guests will launch into the night on Busch Gardens’ newest roller coaster, Cheetah Hunt.

Event dates, times and artists are subject to change. Performances are included with any daily admission or annual pass. Visit BuschGardens.com for more information.

Joe Kleimanhttp://wwww.themedreality.com
Raised in San Diego on theme parks, zoos, and IMAX films, InPark's Senior Correspondent Joe Kleiman would expand his childhood loves into two decades as a projectionist and theater director within the giant screen industry. In addition to his work in commercial and museum operations, Joe has volunteered his time to animal husbandry at leading facilities in California and Texas and has played a leading management role for a number of performing arts companies. Joe previously served as News Editor and has remained a contributing author to InPark Magazine since 2011. HIs writing has also appeared in Sound & Communications, LF Examiner, Jim Hill Media, The Planetarian, Behind the Thrills, and MiceChat His blog, ThemedReality.com takes an unconventional look at the attractions industry. Follow on twitter @ThemesRenewed Joe lives in Sacramento, California with his wife, dog, and a ghost.
Share
Facebook
Twitter
Linkedin
Email
Print
WhatsApp
Pinterest
ReddIt
Tumblr
Previous article“We’re thrilled to be joining the Lo-Q portfolio and look forward to offering our combined set of revenue-driving resources to attractions around the globe,” said Steve Brown, accesso CEO.
Next articleKia Named As Founding Partner of College Football Hall of Fame