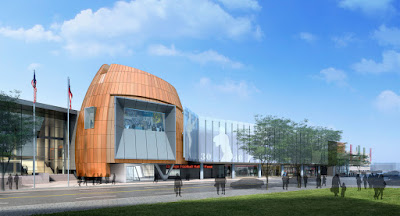 Irvine, CA, USA (December 5, 2012) /PRNewswire/ — Kia Motors America (KMA) and Atlanta Hall Management (AHM) today announced a long-term marketing partnership establishing Kia as a Founding Partner of the all-new College Football Hall of Fame in Atlanta, slated to open in fall 2014. The new College Football Hall of Fame will be a 94,000 square foot facility adjacent to the Georgia World Congress Center and Centennial Olympic Park in downtown Atlanta. Kia is one of the fastest-growing car companies in the U.S. over the last five years, and the new partnership expands on Kia’s commitment to the State of Georgia, which is home to Kia Motors Manufacturing Georgia (KMMG), where two of Kia’s most popular and best-selling vehicles are built.

As a Founding Partner, Kia will be designated as “Official Automotive Partner” of the College Football Hall of Fame with prominent exposure in high visibility initiatives designed to enhance the visitor experience, in addition to numerous displays and branding opportunities. The $66.5MM project will feature in excess of 30,000 square feet of exhibit space, as well as a 45-yard-long indoor football field that also will serve as unique, flexible programming and event space.

“With the new College Football Hall of Fame about to break ground in downtown Atlanta, Kia was presented with an extraordinary opportunity to reach passionate college football fans and expand our strategic sports marketing initiatives, while raising awareness, perception and consideration for the Kia Brand, literally from the ground up,” said Michael Sprague, executive vice president of marketing & communications, KMA. “Kia is proud to call the State of Georgia home to our U.S. manufacturing plant. We are excited about the addition of a new attraction to the Atlanta-area and the opportunity to showcase the fantastic Sorento and Optima vehicles built nearby in West Point, Georgia.”

“We are honored to have Kia as the Official Automotive Partner of the College Football Hall of Fame inAtlanta,” said John Stephenson, Interim Executive Director of Atlanta Hall Management. “Kia’s commitment to the state of Georgia and their ardent support of college athletics make them a perfect fit for the Hall.”

About Kia Motors America
Kia Motors America is the marketing and distribution arm of Kia Motors Corporation based in Seoul, South Korea. KMA offers a complete line of vehicles through more than 755 dealers throughout the United States and serves as the “Official Automotive Partner” of the NBA and LPGA. In 2011, KMA recorded its best-ever annual sales total and became one of the fastest growing car companies in the U.S[4]. Kia is poised to continue its momentum and will continue to build the brand through design innovation, quality, value, advanced safety features and new technologies.

Information about Kia Motors America and its full vehicle line-up is available at its website – www.kia.com. For media information, including photography, visit www.kiamedia.com.

About Atlanta Hall Management
Atlanta Hall Management (AHM) is a not-for-profit, 501(c)3/509(a)2 charitable organization established to build and operate the College Football Hall Fame in Atlanta. AHM has been tasked with the responsibility of delivering a highly-immersive, interactive and engaging experience to Hall of Fame visitors. Slated to open in the fall of 2014, the new College Football Hall of Fame will be a 94,256 square foot facility adjacent to the Georgia World Congress Center and Centennial Olympic Park in downtown Atlanta.

Joe Kleimanhttp://wwww.themedreality.com
Raised in San Diego on theme parks, zoos, and IMAX films, InPark's Senior Correspondent Joe Kleiman would expand his childhood loves into two decades as a projectionist and theater director within the giant screen industry. In addition to his work in commercial and museum operations, Joe has volunteered his time to animal husbandry at leading facilities in California and Texas and has played a leading management role for a number of performing arts companies. Joe previously served as News Editor and has remained a contributing author to InPark Magazine since 2011. HIs writing has also appeared in Sound & Communications, LF Examiner, Jim Hill Media, The Planetarian, Behind the Thrills, and MiceChat His blog, ThemedReality.com takes an unconventional look at the attractions industry. Follow on twitter @ThemesRenewed Joe lives in Sacramento, California with his wife, dog, and a ghost.
Share
Facebook
Twitter
Linkedin
Email
Print
WhatsApp
Pinterest
ReddIt
Tumblr
Previous articleBusch Gardens Tampa Announces 2013 Special Event Lineup
Next articleKissimmee Tourism Agency Rebrands Itself