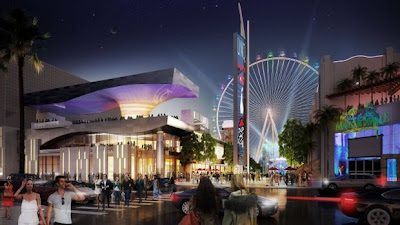 Las Vegas, NV, USA — Caesars Entertainment has announced that it has received the Amusement and Transportation System (ATS) permit from Clark County, Nev., allowing project officials to construct all elements of the High Roller, soon to be the largest observation wheel in the world, eclipsing both the London Eye and Singapore Flyer.

The High Roller will top out at 550 feet and be the focal point of The LINQ, a fully funded $550 million retail, dining and entertainment district located in the middle of the world-famous Las Vegas Strip.

Before an ATS permit can be issued for an attraction such as the High Roller observation wheel, operators must document and demonstrate strict national standards for design, construction, maintenance, operation, testing and inspections as outlined by Clark County’s ATS ordinance.

“This permit represents a significant milestone in the development of the High Roller wheel project,” said The LINQ’s Executive Project Director David Codiga. “We have successfully satisfied Clark County’s requirements to proceed with erecting the structure and look forward to the day the High Roller makes its inaugural rotation.”

The final milestone before the wheel welcomes its first passengers is the official Certificate of Operation, which will be issued once the wheel is completely constructed, tested and commissioned.

Early site civil work began on The LINQ last November, but Las Vegas visitors and residents will notice a steady increase in construction activity later this summer as crews work to erect the High Roller’s 3.5 million pound steel structure. The 520-foot diameter wheel, situated north and south (parallel to Las Vegas Boulevard), will feature 28 glass-enclosed cabins that will unveil broad views of the famed-resort city in the 30 minutes it takes to complete one full revolution. Each cabin will accommodate up to 40 people and will be available for individual or group experiences. Caesars Entertainment officials have already received numerous inquiries from soon-to-be brides and grooms interested in hosting nuptials at 550 feet.

“We are enhancing the allure of the resort experience by bringing both visitors and locals something new and dynamic,” said Greg Miller, senior vice president of development for Caesars Entertainment. “The LINQ will cater to a wide variety of audiences and will serve as a location for a wide range of functions – be it a business meeting, bachelor party, first date, or ladies night out. We are creating an experience that currently does not exist within the market. The development will re-define the center Strip.” 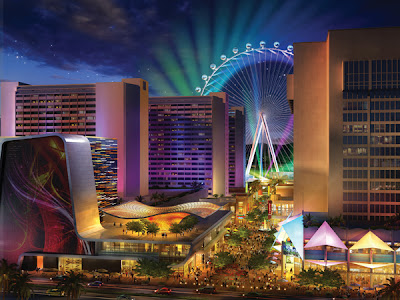 Comprised of diverse retail, dining, and entertainment experiences, The LINQ will span more than 200,000 square feet of gross leasable area and is planned to appeal to the region’s growing 21 to 46 clientele – whose market share is estimated to grow to 52 percent of Las Vegas visitor spending by 2015. Owned and operated by Caesars Entertainment, the mid-Strip attraction is designed as a destination in its own right and is being created to revitalize the center-resort corridor. An estimated 20.4 million people pass in front of this space each year.

In addition to the development of The LINQ, Caesars Entertainment is making simultaneous upgrades to three, large mid-Strip resorts. On The LINQ’s north side, an engaging guest walk path will lead from the Carnaval Court outdoor plaza at Harrah’s Las Vegas through the Imperial Palace Hotel & Casino to The LINQ. A pedestrian connection will also be built from The LINQ into Flamingo Las Vegas on the south. Additional enhancements will completely transform the facade, porte cochere, casino and hotel reception areas of the Imperial Palace. Improvements to resort guest service areas will be introduced in phases.

The LINQ retail, dining and entertainment experience is scheduled to open in 2013. Caesars estimates that The LINQ project will employ about 3,000 construction workers and create approximately 1,500 permanent jobs upon opening.

About Caesars Entertainment Corporation
Caesars Entertainment Corporation is the world’s most diversified casino-entertainment company. Since its beginning in Reno, Nevada, more than 74 years ago, Caesars has grown through development of new resorts, expansions and acquisitions, and now operates casinos on four continents. The company’s resorts operate primarily under the Caesars®, Harrah’s® and Horseshoe® brand names. Caesars also owns the World Series of Poker® and the London Clubs International family of casinos. Caesars Entertainment is focused on building loyalty and value with its guests through a unique combination of great service, excellent products, unsurpassed distribution, operational excellence and technology leadership. We are committed to environmental sustainability and energy conservation and recognize the importance of being a responsible steward of the environment. For more information, please visit www.caesars.com.

Joe Kleimanhttp://wwww.themedreality.com
Raised in San Diego on theme parks, zoos, and IMAX films, InPark's Senior Correspondent Joe Kleiman would expand his childhood loves into two decades as a projectionist and theater director within the giant screen industry. In addition to his work in commercial and museum operations, Joe has volunteered his time to animal husbandry at leading facilities in California and Texas and has played a leading management role for a number of performing arts companies. Joe previously served as News Editor and has remained a contributing author to InPark Magazine since 2011. HIs writing has also appeared in Sound & Communications, LF Examiner, Jim Hill Media, The Planetarian, Behind the Thrills, and MiceChat His blog, ThemedReality.com takes an unconventional look at the attractions industry. Follow on twitter @ThemesRenewed Joe lives in Sacramento, California with his wife, dog, and a ghost.
Share
Facebook
Twitter
Linkedin
Email
Print
WhatsApp
Pinterest
ReddIt
Tumblr
Previous articleProSlide Opens KrakenRACERs at Three US Parks
Next articleBig Time Rush, Nickelodeon Sensation, Hits Camelbeach Mountain Waterpark on Tuesday, August 7th!