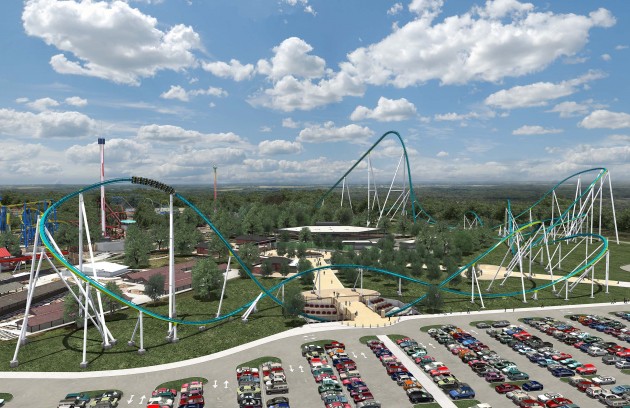 [quote]Starting with Fury 325, we plan to make Carowinds a destination for thrillseekers to celebrate the Carolinas.  The new ride will build on the heritage of the park, creating new memories and traditions for our loyal fans and future guests from around the world.” –Mike Fehnel, Carowinds Vice President and General Manager[/quote]

Charlotte, NC (August 21, 2014) / PR Newswire / — For more than 40 years, Carowinds has been the place where the Carolinas come together. It’s where the Tar Heel State and the Palmetto State meet. It’s where families and friends bond over thrilling rides and entertainment. Carowinds will now unite its storied history with its future as the standard for thrills by unleashing Fury 325, the world’s tallest and fastest giga coaster.

Fury 325 will simulate the wild, daring and spontaneous flight of the hornet. The new ride will be visible from uptown Charlotte, renewing the park’s skyline and serving as a symbol of changes to come. Fury 325 is part of a planned $50 million dollar multiyear investment to bring new life to founder Pat Hall’s original vision for Carowinds. The park will be revamped from top to bottom to celebrate Carolina culture including new rides and attractions, signature Carolina food offerings and entertainment. Opening in Spring 2015, Fury 325 will be the centerpiece of a new 8.2 acre main entrance plaza that includes a state–of–the–art ticketing and season pass processing area and expanded guest service facilities. 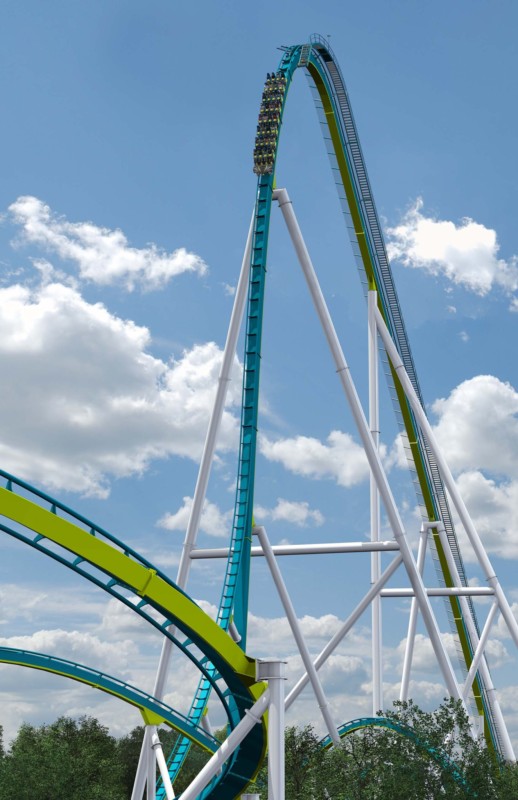 Riders will board into three 32–passenger open air trains and begin their ascent to the top of a 325–foot (over 30 stories) hill. This immense hill is followed by an exhilarating 81 degree first drop. Like an angry hornet chasing its target, Fury 325 will race through a series of hills, curves and quick transitions while reaching speeds of up to 95 miles per hour. Riders will speed along 6,602 feet of track during the nearly three and one half minute ride.

“The tradition of the park is so important to those who have grown up here,” says Mike Fehnel, Carowinds Vice President and General Manager. “It’s long overdue that we gave our fans a new energy surrounding Carowinds, which will build on our legacy as the premiere entertainment destination for generations of Carolinians.” 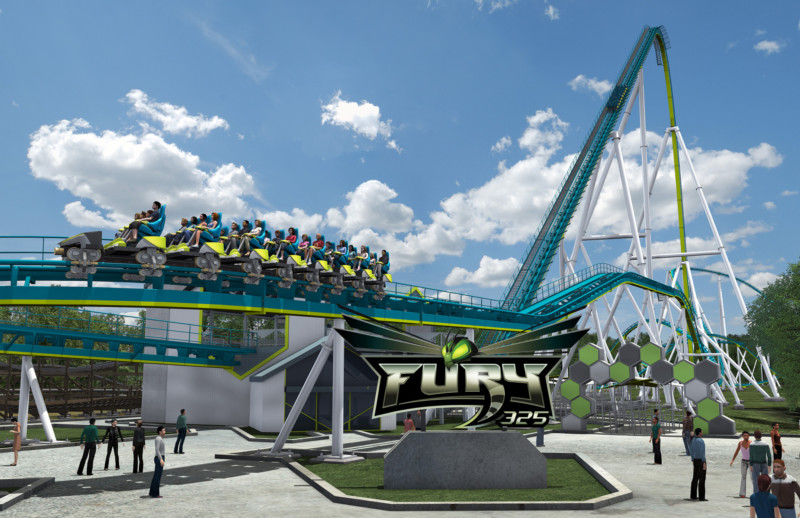 Those who can’t wait until Spring 2015 to experience Fury 325 can take a virtual ride at carowinds.com/fury325 where they can also check out photos, virtual renderings, ride stats and more. This Fall, fans can purchase a 2015 season pass or renew current season passes for the lowest price of the year at carowinds.com. Fury 325 is designed and manufactured by Bolliger and Mabillard (B&M) of Monthey, Switzerland, a recognized industry leader in roller coaster development and the same firm that brought Vortex to Carowinds in 1992, Afterburn in 1999, and The Intimidator in 2010.

Joe Kleimanhttp://wwww.themedreality.com
Raised in San Diego on theme parks, zoos, and IMAX films, Joe Kleiman would expand his childhood loves into two decades as a projectionist and theater director within the giant screen industry. In addition to his work in commercial and museum operations, Joe has volunteered his time to animal husbandry at leading facilities in California and Texas and has played a leading management role for a number of performing arts companies. Joe has been News Editor and contributing author to InPark Magazine since 2011. HIs writing has also appeared in Sound & Communications, LF Examiner, Jim Hill Media, and MiceChat. His blog, ThemedReality.com takes an unconventional look at the attractions industry. Follow on twitter @ThemesRenewed Joe lives in Sacramento, California with his fiancé, two dogs, and a ghost.
Share
Facebook
Twitter
Linkedin
Email
Print
WhatsApp
Pinterest
ReddIt
Tumblr
Previous articleElectrosonic Equipment Enhances Exploration at Discovery Park of America
Next articleAllison Transmission Provides Smooth Ride Through Germany’s Historic Warsteiner Brewery