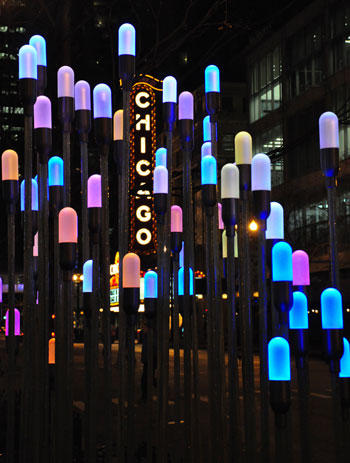 When the Chicago Loop Alliance (CLA) wanted to attract more people to the shops and businesses of State Street they weren’t sure exactly what type of experience they would create. They knew, however, that they wanted a unique placemaking installation that drew on the latest technology available.

DesignLab Chicago helped develop the solution in the form of clusters of giant LED-lit fiberglass “reeds” – symbolic of the prairie grass that constituted a historic Chicago long since gone – capable of creating coordinated light shows in conjunction with hidden sound systems.

DesignLab worked with a team of lighting professionals, show designers and technology integrators to overcome challenges of wireless control, crowded bandwidth and limited power supply to create a dynamic showpiece that has attracted thousands of visitors and continues to evolve.

The CLA expanded the system in 2012 and has the capability to add the system to more streets in the future.

DesignLab has been a principal provider of quality lighting systems and products throughout the Midwest for 30 years.  Born out of a garage as a reaction to existing dealer prices DesignLab was established on the ideal that all customers have the right to a fair deal.

DesignLab is heavily involved in the theatrical and themed entertainment markets. The company also works in the architectural and placemaking industries.

Chicago Loop Alliance was founded in 2005 following a merger between the Central Michigan Avenue Association and the Greater State Street Council, which was created in 1929 and consisted of local merchants eager to promote economic prosperity for their businesses during the Great Depression.

According to its mission, “Chicago Loop Alliance is a member-based business organization that represents Chicago’s most dynamic mixed-use district—the Loop—and advocates for the rapidly growing central business area. Chicago Loop Alliance is focused on promoting and uniting Loop businesses and organizations to support one another in creating a vibrant, flourishing Loop where people live, work and play.”