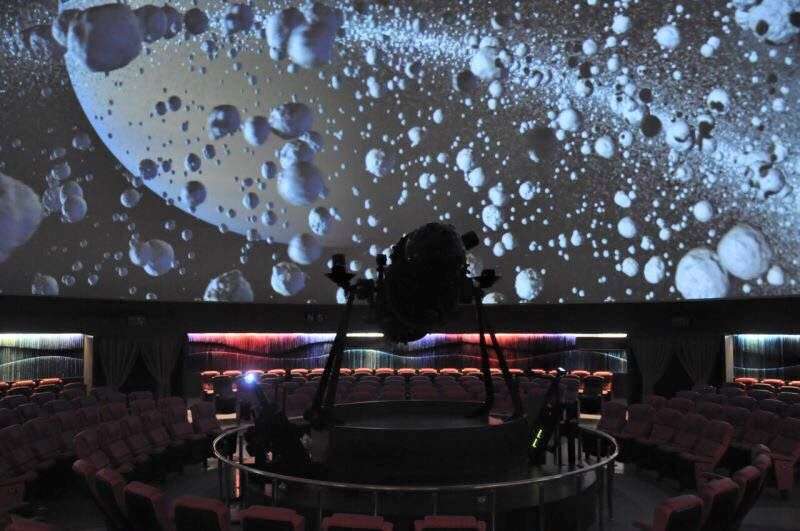 For over 50 years the Bangkok Planetarium has been impressing visitors but more recently, thanks to Christie® Boxer and Evans & Sutherland’s Digistar 5 system, the immersive cosmological experience it now offers has made the planetarium a must-visit destination. Deep space journeys and close-ups of objects in the farthest depths of outer space are attracting new visitors and enticing familiar patrons to return.

Part of a major renovation through E&S’ local agent, Siam TC Technology Company Ltd. that included the installation of 280 new, customized leather seats and a themed wall and lighting system, the installation is popular with astronomy buffs of all ages and features two Christie Boxer 4K30s projecting seamlessly onto the 65-foot (20 meter) dome using both the Digistar 5 and existing Zeiss system.

Scott Niskach, Director of International Sales for Evans & Sutherland, said the Zeiss optical mechanical projector – while effective – is limited to Earth-based observation such as observing the constellations, while the Digistar 5 system can lift off from Earth, penetrating deep into the cosmos, affording the opportunity of seeing the planets, nebulae, distant galaxies, and other intergalactic matter up close in seconds.

“You can rotate around and see the individual stars at different times of year with the optical projector but you can’t ‘lift-off’ from the Earth with it, so we integrated the Digistar 5 into the existing system. Digistar contains the entire known universe modeled in three-dimensions allowing audiences to fly through the stars and experience front-row views of the most amazing places astronomers have discovered,” Niskach added.

Using two Christie Boxer 4K30s, Evans & Sutherland did a center (front and back) installation using customized fisheye lenses to shoot around the optical projector, thereby avoiding shadows on the dome. E&S also integrated their auto alignment and auto blending systems to calibrate and maintain the seamless beauty of the fulldome image. This is the first installation of two Boxers in the center of the theater.

Michael Daut, Creative Director/Marketing Director for E&S, emphasized how key the omnidirectional capabilities and brightness of Christie Boxer projectors were to this project. “The Christie Boxers were able to fit into the position where we needed them because of their omnidirectional capability. It’s a very steep angle – probably an 80-degree angle – almost vertical, where the Boxers are. It was a great fit for the Boxer and I doubt we could have done it with another projector,” said Daut.

“But when the Digistar 5 is used as a purely digital planetarium, this is where the Christie Boxer 4K30 projectors really shine. If we had gone in with dimmer projectors, then the digital experience would not have been as bright and colorful as it is with the Christie Boxer projectors shining at 30,000 lumens each,” Niskach concluded. “This installation is a big change that elevates the planetarium to world-class status.”

Bryan Boehme, Director of Location Based Entertainment and Events for Christie Digital said, “Over the last three years, E&S has sold over 75 Christie 4K projectors (D4K25 and Boxer) making them one of our largest and most valued Platinum resellers.”

Used around the world, the Christie Boxer Series of 3DLP® projectors represents the smartest, brightest, and lightest high-performance, professional projectors available. They include a host of smart monitoring features, single-phase power, built-in warping and blending, omnidirectional capabilities, a full-range of connectivity and Christie TruLife™ electronics.

Joe Kleimanhttp://wwww.themedreality.com
Raised in San Diego on theme parks, zoos, and IMAX films, InPark's Senior Correspondent Joe Kleiman would expand his childhood loves into two decades as a projectionist and theater director within the giant screen industry. In addition to his work in commercial and museum operations, Joe has volunteered his time to animal husbandry at leading facilities in California and Texas and has played a leading management role for a number of performing arts companies. Joe previously served as News Editor and has remained a contributing author to InPark Magazine since 2011. HIs writing has also appeared in Sound & Communications, LF Examiner, Jim Hill Media, The Planetarian, Behind the Thrills, and MiceChat His blog, ThemedReality.com takes an unconventional look at the attractions industry. Follow on twitter @ThemesRenewed Joe lives in Sacramento, California with his wife, dog, and a ghost.
Share
Facebook
Twitter
Linkedin
Email
Print
WhatsApp
Pinterest
ReddIt
Tumblr
Previous articleDubai Festival City’s IMAGINE Using Panasonic Projection Earns Guinness Record as World’s Largest Permanent Projection Mapping
Next articleKennedy Space Center Visitor Complex Collecting Human Generated Energy Through Innovative Technology