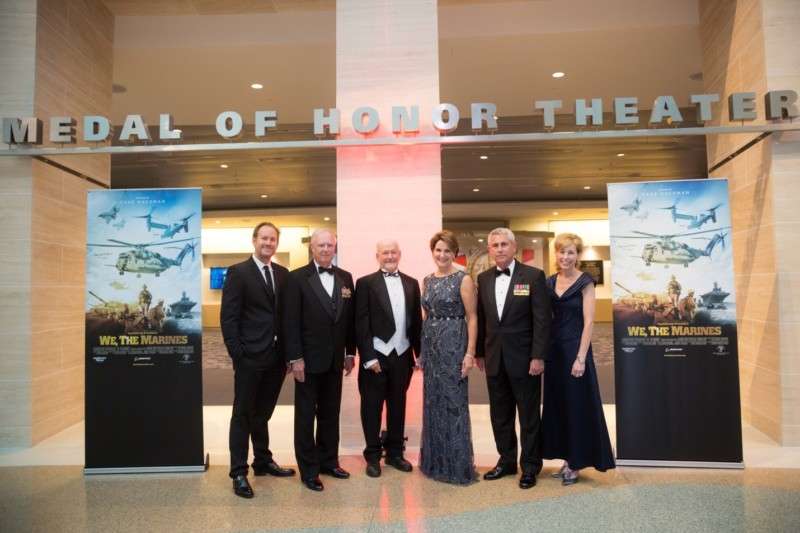 The Marine Corps Heritage Foundation announced the grand opening of their new, state-of-the-art giant-screen theater at the National Museum of the Marine Corps. The Medal of Honor Theater airs a new signature film, “We, The Marines.” The theater and film opened on July 23.

“Opening the Medal of Honor Theater is a significant benchmark as we march toward completion of the National Museum of the Marine Corps” said Lt. Gen. Robert R. Blackman, Jr., president and CEO of the Marine Corps Heritage Foundation. “MacGillivray Freeman Films, a giant-screen film expert with notable productions including “To Fly!” produced for the Smithsonian, did a wonderful job producing, ‘We, The Marines.’ This film, sponsored by Boeing, will afford us a powerful and engaging way to tell the story of today’s Marines and share the Marine Corps experience with all Americans.”

The theater, sponsored by Lockheed Martin, seats 369 visitors and is equipped with multiple Christie 4K RGB laser illuminated projectors blended together to create a more immersive experience. The ultra-realistic images, awe-inspiring visuals and enveloping audio by High Performance Stereo (HPS), will transport visitors into the middle of the action and the edge of their seats.

The signature film is a 40-minute visual narrative of a Marine’s journey through the Corps. Narrated by Academy Award winning actor and Marine Gene Hackman, the film follows the journey of Marines from boot camp, to training, deployment and finally homecoming. The powerful film captures moments of action, bringing to life the sometimes intense experience of serving as a Marine. Filming took place at Marine Corps Bases including Parris Island, Camp Pendleton, Camp Lejeune and 29 Palms.

“With ‘We, The Marines,’ we want audiences to come away with a vast new appreciation for the razor-sharp focus, the fast reflexes, the constant teamwork and the dedication and compassion it takes to serve in the Marine Corps,” said Greg MacGillivray, the film’s director and two-time Academy Award-nominated Chairman of MacGillivray Freeman Films. “Marines have a higher calling, they protect our entire way of life, and our respect and admiration for this organization and leaders like General Blackman have grown tenfold from our experience making this film. We are honored to have been a part of it.”

Visitors can enjoy the new theater and film while visiting the National Museum of the Marine Corps, which is open 9:00 a.m. to 5:00 p.m. daily except Christmas Day. Admission to the Museum and parking are free. Tickets to “We, The Marines” can be purchased at the theater box office located in the Museum. For more information, visit www.marineheritage.org.

Joe Kleimanhttp://wwww.themedreality.com
Raised in San Diego on theme parks, zoos, and IMAX films, InPark's Senior Correspondent Joe Kleiman would expand his childhood loves into two decades as a projectionist and theater director within the giant screen industry. In addition to his work in commercial and museum operations, Joe has volunteered his time to animal husbandry at leading facilities in California and Texas and has played a leading management role for a number of performing arts companies. Joe previously served as News Editor and has remained a contributing author to InPark Magazine since 2011. HIs writing has also appeared in Sound & Communications, LF Examiner, Jim Hill Media, The Planetarian, Behind the Thrills, and MiceChat His blog, ThemedReality.com takes an unconventional look at the attractions industry. Follow on twitter @ThemesRenewed Joe lives in Sacramento, California with his wife, dog, and a ghost.
Share
Facebook
Twitter
Linkedin
Email
Print
WhatsApp
Pinterest
ReddIt
Tumblr
Previous article
Premier Rides Builds up the Hype at Finland’s Särkänniemi Amusement Park
Next article
Thrill Seekers Drop 110 Feet Inside Mountain at Glenwood Caverns’ Haunted Mine Drop