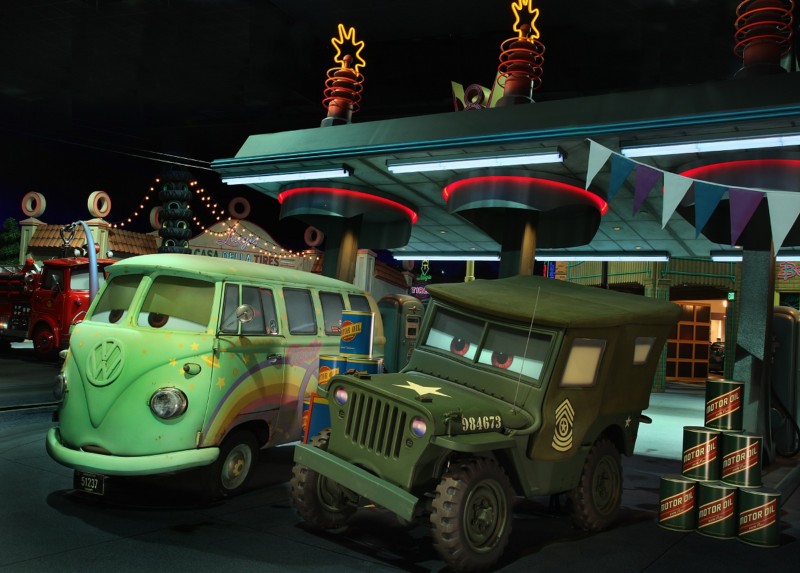 In June, Walt Disney’s Enchanted Tiki Room at The Disneyland Resort in California turned 50—half a century of singing birds, crooning flowers, and drumming, winking, chanting tikis.  The attraction was the world’s first to feature real, full-fledged animatronic figures controlled by early reel-to-reel tape (the “audio” in “Audio-Animatronic”) animation systems and powered by linear pneumatic cylinders.  The Tiki Room proved that dimensional animation was both feasible and popular with guests.  For Walt Disney, visionary behind what the figures would mean for his Disneyland audience, animatronics were never tiring, flexible, and appealing mechanical actors.  For themed attraction designers, an entirely new form of storytelling technology was born.

Fast forward half a century to today, and animatronics are ubiquitous in theme parks, themed shopping and dining, museums, casinos, and many other places.  They are a versatile medium capable of a wide range of guises and performances drawn from an infinite array of character and story sources.  Today, almost all major show-centered rides open with use of animatronic technology in one form or another—from Disney’s Radiator Springs Racers and Mystic Manor, to Universal’s Harry Potter and the Forbidden Journey, plus countless smaller-budget attractions at parks around the world.  Guests have come to expect figures in themed experiences both inside and out of theme park gates, leading designers to look to animatronics as a unique method of engaging visitors. 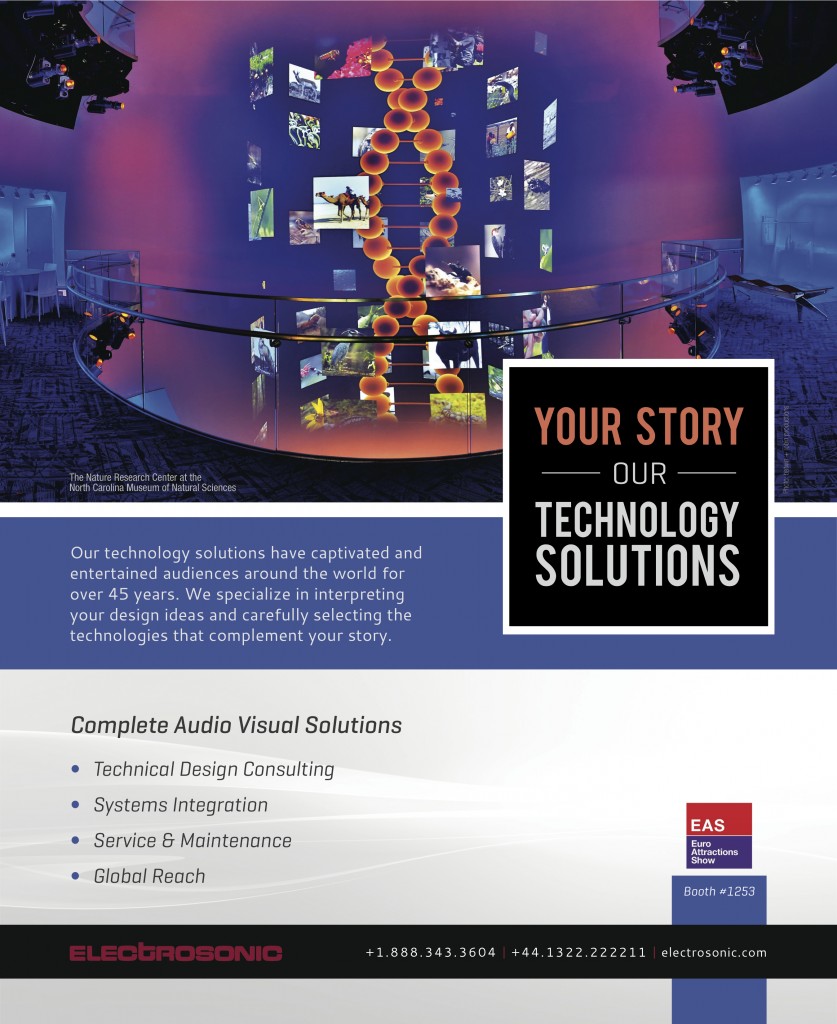 Garner Holt Productions, Inc. (GHP) has built more animatronic figures than any other organization in the world, some 4,000 individual figures over 36 years of business experience.  In just the past year, the company’s creations were put to use in just about every type of themed venue imaginable.  Last summer, a dozen of the company’s animatronics debuted as the stars of Radiator Springs Racers at Disney California Adventure.  The attraction is purportedly the most expensive ever created.  At the same time, on an entirely different budget model, GHP built an animated jazz band—each member is 30 inches tall and heavily caricatured—for ROSHEN Confectionary in the Ukraine, and an exceptionally lifelike Morgan horse for the Fort Sill Museum in Lawton, Oklahoma.

This year, GHP re-imagined the classic Timber Mountain Log Ride (1969) at Knott’s Berry Farm by designing all-new show scenes and populating them with nearly 60 animatronic people and animals.  In May, Mystic Manor at Hong Kong Disneyland opened with more than a dozen GHP animatronic figures and animated props, and the company just completed work on an interactive dark ride for a park in Seoul, South Korea, design for animatronic elements for a major grocery store chain in the eastern US, and is in the midst of creating a new interactive animatronic exhibit for the Walt Disney Family Museum in San Francisco. 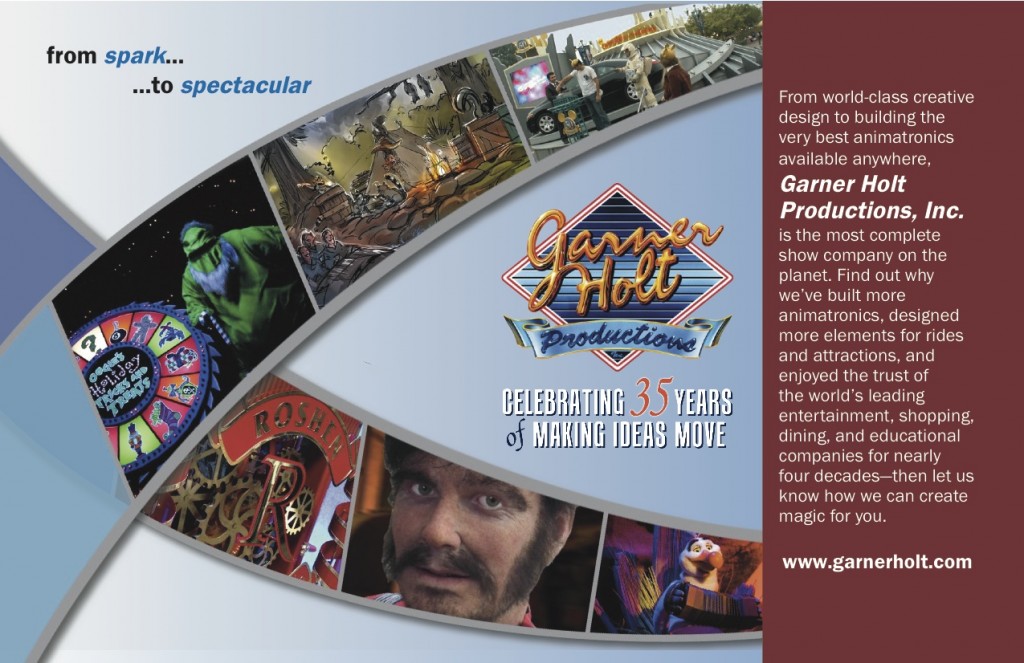 Moving figures are nothing new in the entertainment, educational, and retail world.  In the mid-nineteenth century, many clockmakers also created automata (clockwork moving figures representing people and animals) for magicians, theaters, and wealthy collectors.  At the dawn of the twentieth century, a number of companies in the United States and Europe specialized in motorized figures for store windows.  Their customers ranged from tobacconists and grocers to toy shops, barbers, and department stores.  The same manufacturers were enlisted to create figures for the nascent themed entertainment industry: simple motorized characters for early dark rides and “scenic railroads.”  Later, the producers of world’s fair pavilions turned to these companies to make dinosaurs and other prehistoric creatures come back to life in dramatic displays.  As dimensional animation became more available, its popularity and application increased.

Companies like GHP carry the mantle of those early animation manufacturers.  But where early companies began primarily as fabricators for the stage and retail environments, only later making their way into theme parks, today’s animatronics companies usually have the opposite experience.  Much of this is owed to Disney’s pioneering efforts in modern animation, replacing reciprocating electric motors with linear, computer-controlled actuation capable of more varied, smooth, and realistic performances.  Even Disneyland’s first animated figures were of the old-fashioned motorized variety.  With the increase in sophistication of animation technology, the old ways seemed hokey and amateurish.  As a result, audience expectation for realism increased, eventually putting those early animation manufacturers out of business and giving rise to a cottage industry of animatronics companies born from Disney’s efforts (and in many cases founded by its former employees).

Today, organizations like GHP and others service mainly the themed entertainment industry, but a significant portion of business comes from outside theme park gates.  “For about fifteen years, I actually did more non-theme park work than I did rides and shows,” said Garner Holt, GHP’s founder and president.  “Chuck E. Cheese restaurants were my biggest customer and I did a lot of work for shopping malls, like Caesars’ Forum Shops.  We did a large number of projects for FAO Schwarz and others.  Now, retail projects probably account for about 20% of our output.”

The past two decades have seen the rise of animatronics in new locations outside park gates, like the globally successful Rainforest Cafes, Chuck E. Cheese FECs, and even in places like Ripley’s Believe it or Not museums.  Traditionally non-theme-oriented companies like ROSHEN Confectionary are beginning to embrace animatronics for their stores.  The Eastern-European candy giant approached GHP to design a funky, funny animatronic “jazz” band for a new flagship location in Kiev last year.  The characters were modeled to resemble classic musician troupes, from a pouty rock guitarist to a soulful blues bassist and free-spirited reggae drummer, fronted by a sultry singer straight out of a 1930’s dance club.  “The figures and their performance are designed purely for the delight of ROSHEN’s customers,” Holt said.  “They reinforce an image of fun, high-quality products and are really a form of subtle advertising.  A lot of savvy companies are starting to do that sort of thing in stores.”

Less subtle, but equally entertaining, were GHP’s efforts for the Timber Mountain Log Ride.  The original 1969 cast of mostly static figures was replaced this year with state-of-the-art animatronics.  The availability of true animatronics to anyone but Disney at the time the attraction was originally opened led designer and builder Wendell “Bud” Hurlbut to use largely motionless characters and taxidermy animals, punctuated in a few places by simple motorized figures.  “I think Bud would have used animatronics had they been readily available and affordable,” said Holt.  “But, at the time, only Disney had the wherewithal to make and use them.  Now we’ve gone in and put some ‘new wine in an old bottle’ in the Log Ride.”  Although a successful attraction for nearly half a century, animatronics allowed the Timber Mountain Log Ride to become an immersive themed experience on par with any of the world’s greatest attractions.

The versatility of animatronics as a technology—for selling a story or a product, performing history or underscoring fun—has ensured its longevity, half a century on.  And because animatronics are the ultimate actors, they can continue to define roles in all sorts of venues.  “A lot of people ask us if animatronics are getting replaced by other things, like video effects,” said Holt. “But I really don’t think that will happen.  It’s an old technology, but it still fascinates people.  You can’t do the same things without dimensional characters.  Audiences just love animatronics.”  • • •