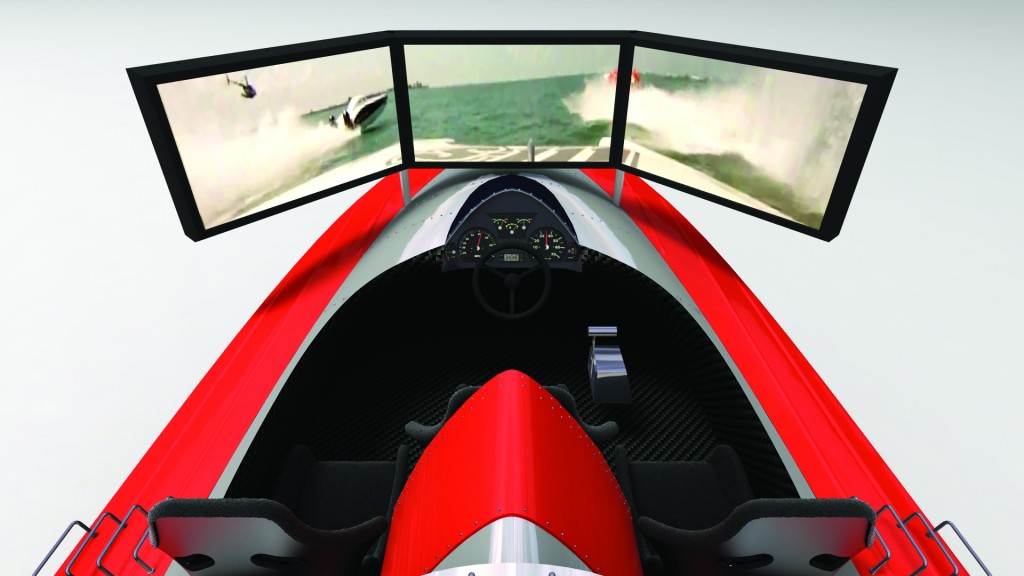 Amsterdam, The Netherlands — Cruden, one of the world’s leading professional motion simulation companies, will make a virtual splash at the IAAPA Attractions Expo in Orlando (November 18th-22nd 2013) by inviting visitors to take the helm of its new powerboat simulator.

The Amsterdam-based world leader in professional-grade full motion simulation is adding to its traditional motorsport simulator offer and teasing visitors to its booth (no. 1051) with interactive drive and ride simulator ideas ranging from speed boats and rafts to motorcycles and helicopters.

Guests will be able to climb aboard a Hexatech 3CTR (three-seater) simulator and launch themselves into the water in a dual engine P1 powerboat or a fast interceptor military vessel, carefully modeled by Cruden’s vehicle dynamics engineers.  This is the first Cruden simulator to offer interaction for three guests at once. The guest to the right of the driver controls the throttle; the person on the left is the navigator. Depending on customer requirement, the simulator can be switched to race car mode, providing a most versatile, modern attraction. The powerboat simulator is a more affordable way for attractions owners to specify a Cruden simulator; requiring fewer degrees of motion than a racing simulator, the basic 2-DOF simulator will cost around €85,000 (ex. works).

“This year, IAPPA is all about demonstrating Cruden’s intention as a serious simulator technology leader in the attractions sector, and in a number of imaginable experience settings. The sophistication of our simulators is already appreciated by race engineers for vehicle development; now we will help the market understand what that means for water or air craft and for interactive experiences incorporating multiple guest inputs, such as powerboat racing or wild water rafting,” says Frank Kalff, commercial director of Cruden.

“We have observed that of the many power- or speedboat simulators on the market, none really provide a representative feeling of speed and force feedback. We have spent hours with the Dutch military on its fast interceptor vessels and security boats to get the motion just right.”

The powerboat simulator is available with a powerboat body.

Joe Kleimanhttp://wwww.themedreality.com
Raised in San Diego on theme parks, zoos, and IMAX films, InPark's Senior Correspondent Joe Kleiman would expand his childhood loves into two decades as a projectionist and theater director within the giant screen industry. In addition to his work in commercial and museum operations, Joe has volunteered his time to animal husbandry at leading facilities in California and Texas and has played a leading management role for a number of performing arts companies. Joe previously served as News Editor and has remained a contributing author to InPark Magazine since 2011. HIs writing has also appeared in Sound & Communications, LF Examiner, Jim Hill Media, The Planetarian, Behind the Thrills, and MiceChat His blog, ThemedReality.com takes an unconventional look at the attractions industry. Follow on twitter @ThemesRenewed Joe lives in Sacramento, California with his wife, dog, and a ghost.
Share
Facebook
Twitter
Linkedin
Email
Print
WhatsApp
Pinterest
ReddIt
Tumblr
Previous article
WhiteWater receives awards at industry events
Next article
Six Flags Fiesta Texas – Fright Fest