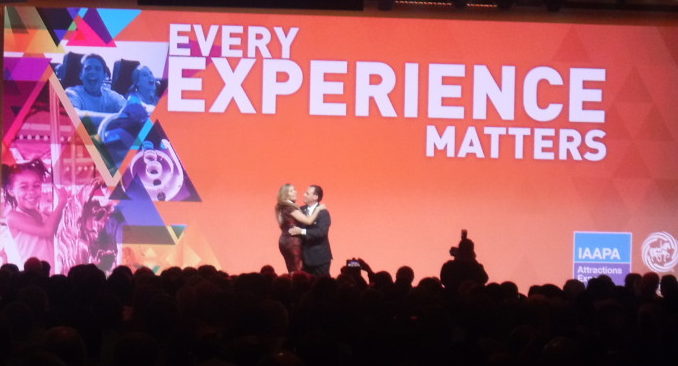 As one of his final acts as IAAPA Chair, Universal’s John McReynolds asked his girlfriend Star Hudspath to join him onstage at the IAAPA Attractions Expo 2016 kickoff event on Nov 15 (above photo) where he surprised the audience of attractions industry professionals by publicly asking her hand in marriage (she said yes). This would be a precursor to numerous alliances of companies and concepts announced during the week-long convention in Orlando’s Orange County Convention Center.

Announced for the first time at IAAPA: Extraordinary Voyages Adventure Dining (EVAD), the result of a collaboration between The Producers Group and Premier Rides. The new project promises a new dimension of themed dining with an immersive environment combining elements such as motion simulation, cinematic, live action, and visual effects. Premier Rides President and Owner Jim Seay said, “With the ability to add and change destinations, EVAD can be refreshed as desired to encourage repeat visitation and take advantage of new trends in entertainment and advances in technology.”

CAVU Designwerks, founded in 2015 and headed by CEO Peter Schnabel, provides media-based attractions for a variety of entertainment applications. Last summer, they announced an alliance with Falcon’s Creative to create the CircuMotion theater. CAVU also recently teamed with software development company One Bit Labs to found the co-venture DreamCraft Attractions. During the company’s IAAPA press event, they announced Vernon McDugan as CEO of DreamCraft, and its first VR product.

Vernon McDugan, CEO of DreamCraft, and Chris Robertson, founder of One Bit Labs.

McDugan is a former Disney executive with over 23 years experience in both parks operation management and design, followed by a stint as General Manager at Universal Studios Japan. At the CAVU press event, he introduced the company’s approach to creating a social VR experience: making participants visible to one another as digital avatars. They’re prepared to equip a range of environments with VR: walk-around, track, motion-base, or coaster. According to Joanne Parker Robertson, Design Director for One Bit Labs, DreamCraft Attractions has resolved what they consider to be an important transitional issue in VR – that brief moment when the brain has the challenge of switching between the real world and the virtual – by beginning the virtual world in the same physical environment where the experience begins and then switching in the headset from something realistic to something more fantastic.

New ways of communicating with guests were featured at the Panasonic Labs Road Show, a private event co-hosted by Panasonic, Videro, Apple, and nWave. Among the highlights were Videro Swoosh, which allows an image and data to be moved from one platform, such as a smartphone, to another, like a monitor. Because the Videro image and data are formatted uniquely for each screen, the resulting image is optimized for the destination. nWave showed how Videro Swoosh could be successfully implemented in a theater for pre-show quizzes, either using digital signage in the lobby or the theater screen itself. During the presentation, Videro CEO Johannes Büld pointed out that between the two versions of Orbi centers that opened in Yokohama (2013) and Osaka (2016), the cost savings of the improved Videro product would save over $1 million annually because of the lack of server rooms, less wiring and cooling systems, not to mention a 70% reduction in long-term maintenance costs.

Büld also showcased the LinkRay technology, which comprises of a modulator that created a light frequency that a smartphone app can interpret to open a pre-determined web page or other content on the user’s phone. The system can be used to illuminate objects, used in a lightbox backlit sign, or also used in digital signage. The technology is an alternative to beacons or QR codes. InPark profiled this technology in its November 2016 issue.

Theaters that move the audience into position are a staple of the visitor attractions industry, and manufacturers continue to find new configurations and combinations to create immersive experiences. Visitors to the Dynamic Attractions booth could learn about a concept with a motion base under the seating platform, three rotating sets, and huge physical sets where action scenes would take place with live props. According to Marissa Huntsman, project coordinator for the theater, the concept can also be used for museum environments, with astronomy shows showcasing astronomical models and history shows with a live host showcasing the museum’s artifacts.

Polin’s booth prominently featured two rafts mounted on motion simulators and equipped with a VR system. Visitors could virtually ride their Space Race and Storm Racer attractions. Director of Marketing & Communication Sohret Pakis said they are working to offer VR overlays on existing slides, but the technology still has some elements to finesse. “We are always reinventing ourselves,” says Pakis. “We try to think like our clients and come up with solutions that they would appreciate.”

To that end, Polin Waterparks has expanded to become Polin Parks, with additional divisions concentrating on aquariums, safari parks, wave parks, and game technologies.  One of the first game elements is the Splash Cabin, a partnership with Lagotronics, which was available for play at their booth. Two players shoot virtual water guns against animated competitors, who then shoot back with real water piped through holes in the screen.  In the end, the losing player is doused by a huge water splash from above.

Polin is also unveiling SplashWare, a series of enhancements available for slides that include traffic lights, scoreboards and gaming devices that can be added onto slides.

Baran Eviliyaoglu and Ayhan Senturk are the co-founders of Ocean Aquarium, a leading designer of international public aquariums, including one that opened in Albany, New York, USA five weeks ago.  They also own and operate four aquariums in Turkey and Iran, one of which houses the world’s longest aquarium tunnel.  All four are compliant to EAZA and WAZA standards.  They have now partnered with Polin to create Polin Aquariums, with the goal to expand their services and operations on a global level.

Falcon’s Creative showcased the opening of its Heroes & Legends attraction at the Kennedy Space Center Visitor Complex (KSCVC).  The new pavilion is positioned as an introduction to the visitor center and to manned spaceflight. Heroes & Legends explores what it takes to be a hero. A 360 degree presentation titled “What is a Hero?” examines the attributes that make astronauts and others heroic. A second theater features the show “Through the Eyes of a Hero” and uses lighting and 3D imagery to take guests back to the early days of the space program. In the third segment of the attraction, “A Hero Is….”, guests enter pods where astronauts tell the stories of either personal or NASA artifacts on display and what that meant to them on their journeys.  Nine different attributes of being a hero – inspired, curious, passionate, tenacious, disciplined, confident, courageous, principled and selfless – are examined within the pods.

According to Therrin Protze, KSCVC COO, unlike other attractions at the facility, STEM education (which is one of its priorities) is not pushed directly at guests at Heroes & Legends, but rather is handled through the storytelling of the astronauts.  One pod features a school science project while the astronaut involved explains how that led to his career at NASA.

At the Falcon’s booth, I had the opportunity to speak with Saham Ali, the company’s Director of Technology, about its Augmented Reality program. Based around Microsoft HoloLens, Falcons is positioning AR as a tool for immersive storytelling that can enhance existing experiences. Trying out Falcon’s AR headset, I was able to walk around dinosaurs and view virtual mannequins sitting on a moving Oceaneering vehicle at the adjacent booth. Ali says that AR provides a doorway to MR, or Mixed Reality, and that one of the most important prospects for the technology is the smart space – an overlay of info where descriptive data can be pinpointed directly in space to physical objects, a much more effective tool than current hand-held solutions for enhanced description.

Virtual Reality was to be found all throughout the show, primarily for simulator and games, replacing what in the past would have been 3D or multi-screen systems. Florida firm Talon Simulations presented a motion seat which can be used with many off-the-shelf software solutions, including car racing and air combat. The VR headset uses Oculus Rift, while the motion base is 4 DOF, with force feedback in both the seat and wheel.

Leading motor simulation company Cruden introduced its new entertainment division, Cesys, at the show along with a new product, the Cesys Motorbike.  With two degrees of motion, the bike features both gamer and reality modes.  The VR – also Oculus – was chosen by Cruden for its resolution, comfort, and integrated headphones.

Another VR gaming solution was featured by MediaMation, in conjunction with its partner on the Cedar Fair attraction Mass Effect: New Earth, 3D Live.  While watching players wearing VR headsets race while inside motion-base ATV simulators, guests in line and those walking by could don 3D glasses and view the images in 3D behind the players on a giant LED screen. According to 3D Live’s Nathan Huber, “This takes the gaming experience and fuses it with the line experience.”

MASTERS OF THE 3D-INTERACTIVE DARK RIDE

Alterface held a party celebrating its 15th anniversary and honoring its clients with awards of the Alterface logo in 3D printed chocolate.  The company showcased the latest ETF dark ride vehicle, operating off its Salto show control system. During the short demo ride, guests were able to try out the Alterface technology through several short games presented on several screens and on projection mapped surfaces in the small theater.

Triotech announced three new projects – a flying theater, the first of which will be installed at San Francisco’s Pier 39, a Fear The Walking Dead interactive dark ride, which will be a joint venture on Las Vegas’ Fremont Street Experience, and Heide Park’s Ghostbusters 5D.

Alcorn McBride introduced its RidePlayer, which fixes synchronicity issues between external and onboard audio, and is ideal for dark ride vehicles and parade floats.  The system uses wireless and GPS technologies tied in with a master clock.  RidePlayer has the V16 show controller built in (ideal for shooters) and is being installed on Oceaneering dark ride vehicles. (Click for an interview with Steve Alcorn from March 2016.)

Christie presented its Mystique and Pandora’s Box suite of software.  The projection mapping applications were being presented at the IAAPA show for use in attraction design. Christie’s Curtis Mutter also showed how the software can be successfully used for alignment of screens, both in giant screen and fulldome theaters and on attractions where motion blending is used for filmed images.  Christie Mystique is also profiled in InPark’s InfoComm 2016 coverage.

Press get their first look at accesso Prism.

accesso is taking its expertise with ticketing and virtual solutions to the next level with a new single solution – accesso Prism. The all-in-one digital wristband handles ticketing, queue, charges, hotel room entry, photo tagging, and locker rental and access while collecting data for operators and receiving tailored messages and discounts. The touchscreen houses a gorilla glass lens to protect against damage.

TECHNOLOGY AND CREATIVITY: JOINT TOOLS FOR THE FUTURE

From meeting with the various vendors around the trade show floor, it’s become very apparent that, now more than ever, a successful attraction is a marriage of technology and creativity, or a marriage of existing concepts into a new product, meeting the clients needs in a way that uniquely enhances the guest experience.  Perhaps it was luck or perhaps it was programmed in advance – as Star Hudspath rushed the stage to embrace John McReynolds, the electronic screen overlooking them displayed the Expo’s theme – “Every Experience Matters.”  As the largest live B2B forum for the attractions industry, the importance of experience was relevant throughout, with the goal of all the vendors I met and spoke with being engaging experiences for clients and their guests long into the future.