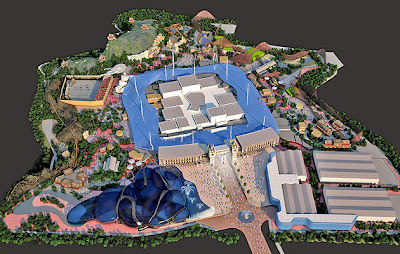 The Gravesend Reporter reports on a presentation by Vision XS‘s Tony Sefton about the UK’s proposed Paramount Park:

“It would have a theme park based on a Hollywood movie set, an indoor water park, theatres, cinemas, event space and a country park at the peninsula’s tip.

“Techno Expo, an exhibition of future technologies such as high-speed cars, would add an educational aspect and every afternoon a massive carnival would be held followed by a full-blown evening show.

“Tony Sefton, director of Vision XS, which is one of the largest players in the theme park industry, spoke to Gravesham residents on Wednesday [November 28] to answer the numerous questions that have arisen since the first announcement of the plans in October which, he explained, was a rushed response after an internal leak.

“Mr Sefton described Paramount Park as a means to ‘rebalancing the economy and regenerating’ the area.

“He added that few areas in Europe were suitable for this type of project and his team had already worked for three years studying whether the Swanscombe peninsula would work.

“It is the existing transport links – the motorway, the high-speed train to London and the Eurostar from Ebbsfleet – that let to the selection of the site.

“A Thames airport was not on their agenda, he said, although it was a ‘pipe dream,’ and as for a third Thames crossing at Swanscombe, he said the park wouldn’t happen if a bridge was built.

“In order to limit congestion on local roads, they plan to time the carnival and evening show during peak hours so few visitors cars leaving the park at those times, and the idea is to promote the ‘highest public transport mix of any major leisure park.'”

Joe Kleimanhttp://wwww.themedreality.com
Raised in San Diego on theme parks, zoos, and IMAX films, Joe Kleiman would expand his childhood loves into two decades as a projectionist and theater director within the giant screen industry. In addition to his work in commercial and museum operations, Joe has volunteered his time to animal husbandry at leading facilities in California and Texas and has played a leading management role for a number of performing arts companies. Joe has been News Editor and contributing author to InPark Magazine since 2011. HIs writing has also appeared in Sound & Communications, LF Examiner, Jim Hill Media, and MiceChat. His blog, ThemedReality.com takes an unconventional look at the attractions industry. Follow on twitter @ThemesRenewed Joe lives in Sacramento, California with his fiancé, two dogs, and a ghost.
Share
Facebook
Twitter
Linkedin
Email
Print
WhatsApp
Pinterest
ReddIt
Tumblr
Previous articleMichigan Science Center Opening December 26
Next articleSpain Looks to Themed Mega Resorts During Economic Crisis