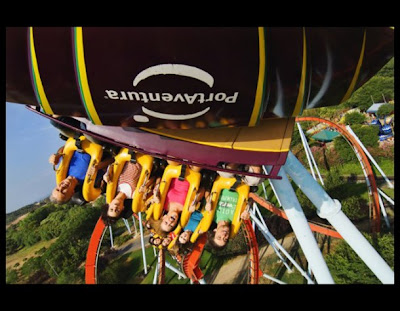 Switzerland’s Le Temps reports on the growing number of themed mega resorts on the books for Spain, including the proposed Barcelona World:

“For the moment, Barcelona World exists only on the drawing board. Four hundred hectares of uncultivated land, where six theme parks will be built by 2016. Each will represent a part of the world: Europe; the U.S; and four emerging countries: China, Brazil, Russia and India. There will be casinos, mega-hotels, offices and restaurants. Barcelona World promoters are banking on a 4.7 billion-euro investment, 20,000 new jobs and about 10 million tourists every year. That’s even more tourists than the city of Barcelona itself. Bulldozers and cranes should be starting their engines next year . . .

“With Barcelona World, Catalonia is hoping to beat the current stagnation and offer dreams of job creation, an influx of gambling tourists and a place where families can have fun together. Other regions are following the trend. In June, the first stone for the Paramount Studios Park was laid in Murcia.

“In Valencia, a Ferrari park is being discussed and in Alcorcon, a suburb west of Madrid, American billionaire Sheldon Adelson is hoping to build a Las-Vegas-style complex with six casinos, 12 hotels with a total of 36,000 rooms and three golf courses. According to the Spanish media, the project would cost an estimated 16.9 billion euros – a record for Spain – and create nearly 170,000 jobs over the next decade.

“In Madrid, authorities have halted infrastructure constructions for lack of cash but are ready to do what it takes to help the American billionaire work his magic and bring his dollars. That includes changing some laws to accommodate Adelson and make his mega-complex a special zone where smoking, minors and anonymous betting will be allowed, where unions will be banned and labor laws not applied.

“’This frenzy that is presented as a cure-all hides many loopholes and lies,’ says Ana Sanz, an architect opposed to Adelson’s project. ‘This initiative is unsustainable on arid land. It will use as much electricity as the city of Saragossa and as much water as a city of 70,000 people.’ There are also doubts about the project’s profitability. ‘We will have to see how many jobs are actually created,’ says Maria Fernandez, an economist. ‘Adelson will only fund about 35% of the project. The rest will have to be paid for by our banks, which are already struggling.’

“This new trend is even more surprising when you consider Spain’s history with theme parks. Over the past 20 years, Spanish theme parks have been a series of failures. Terra Mitica, created in 2000 in Benidorm, only sees a third of its expected visitors and is facing a 400-million euro debt. The only exception is Port Aventura, near the future Barcelona World site, which made a 12-million-euro profit in 2011.”

Joe Kleimanhttp://wwww.themedreality.com
Raised in San Diego on theme parks, zoos, and IMAX films, Joe Kleiman would expand his childhood loves into two decades as a projectionist and theater director within the giant screen industry. In addition to his work in commercial and museum operations, Joe has volunteered his time to animal husbandry at leading facilities in California and Texas and has played a leading management role for a number of performing arts companies. Joe has been News Editor and contributing author to InPark Magazine since 2011. HIs writing has also appeared in Sound & Communications, LF Examiner, Jim Hill Media, and MiceChat. His blog, ThemedReality.com takes an unconventional look at the attractions industry. Follow on twitter @ThemesRenewed Joe lives in Sacramento, California with his fiancé, two dogs, and a ghost.
Share
Facebook
Twitter
Linkedin
Email
Print
WhatsApp
Pinterest
ReddIt
Tumblr
Previous articleDetails Begin to Emerge on UK’s Paramount Park
Next articleMarine Life Park at Resorts World Sentosa Opens with Waterpark and World’s Largest Aquarium