Director Fernando Meirelles Combines Nature, Music, and the Energy of Brazil to Open the 2016 Rio Olympics 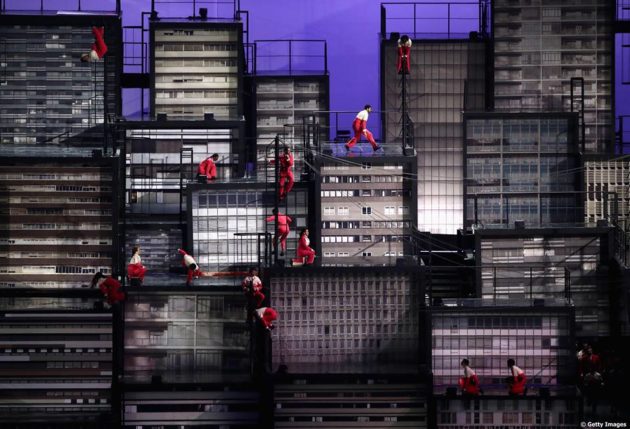 Rio de Jainero, Brazil (August 6, 2016) — A joyful sashay through Brazil’s extraordinary musical heritage was infused with a social message and a warning over the dangers of climate change as Rio de Janeiro drew back the curtain of the 2016 Olympic Games with a highly charged opening ceremony.

“Past the risky point” is how creative director Fernando Meirelles described the state of the planet hours before the ceremony in the Maracana Stadium, and the Oscar-nominated director of City of God made good on his promise to urge the expected three billion-plus television audience to sit up and take action.

The Amazon featured heavily, with one section highlighting the birth of the world’s biggest rainforest inducing gasps of delight as clouds of luminous yellow butterflies engulfed the iconic football stadium.

The celebration continued to be matched by Meirelles’ message, with even the Olympic rings turning a lush green after the almost 11,000 parading athletes were each given a cartridge containing a seedling. Organisers have pledged that every tree will be transplanted to create an Athletes’ Forest in Deodoro, site of the second-largest Rio 2016 venue.

Areas of low-income housing were represented by wild urban beats and stark images of poverty. A city of contrasts, pop-funk sensation Ludmilla shared the stage with 1950s samba queen Elza Soares, before 12-year-old rapper MC Soffia picked up the baton and led 1500 residents of the Carnaval city into a rocking street party.

Many of Brazil’s highest profile personalities made an appearance. Supermodel Gisele Bundchen, 36, marked what she has declared to be her last appearance on a catwalk in spectacular style, holding the stadium enraptured to Tom Jobim’s iconic song The Girl from Ipanema. Compatriot Lea T, the first transgender model to sign a beauty contract, added to the insistent message of tolerance and diversity, carrying a placard in the Athletes’ Parade.  The tones of acclaimed British actress Judi Dench were also heard, reading a classic Brazilian poem.

Two further moments of international focus stood out. First, the awarding of the newly inaugurated Olympic Laurel to two-time Olympic gold medalist athlete Kipchoge Keino, 76, recognizing his work educating orphaned children, and the arrival of the Refugee Olympic Team to roars almost as deafening as those reserved for the home athletes.

In a fitting finale, it was Vanderlei Cordeiro de Lima, the marathon runner made famous for seeing his gold medal hopes dashed by a spectator who wrestled him to the ground during the latter stages of the Athens 2004 race, who lit the Olympic flame.

Joe Kleimanhttp://wwww.themedreality.com
Raised in San Diego on theme parks, zoos, and IMAX films, Joe Kleiman would expand his childhood loves into two decades as a projectionist and theater director within the giant screen industry. In addition to his work in commercial and museum operations, Joe has volunteered his time to animal husbandry at leading facilities in California and Texas and has played a leading management role for a number of performing arts companies. Joe has been News Editor and contributing author to InPark Magazine since 2011. HIs writing has also appeared in Sound & Communications, LF Examiner, Jim Hill Media, and MiceChat. His blog, ThemedReality.com takes an unconventional look at the attractions industry. Follow on twitter @ThemesRenewed Joe lives in Sacramento, California with his fiancé, two dogs, and a ghost.
Share
Facebook
Twitter
Linkedin
Email
Print
WhatsApp
Pinterest
ReddIt
Tumblr
Previous articlePHOTOS: Rio 2016 Olympics Opening Ceremony
Next articleGargoyles Invade Six Flags Discovery Kingdom on VR Coaster Experience During Fright Fest