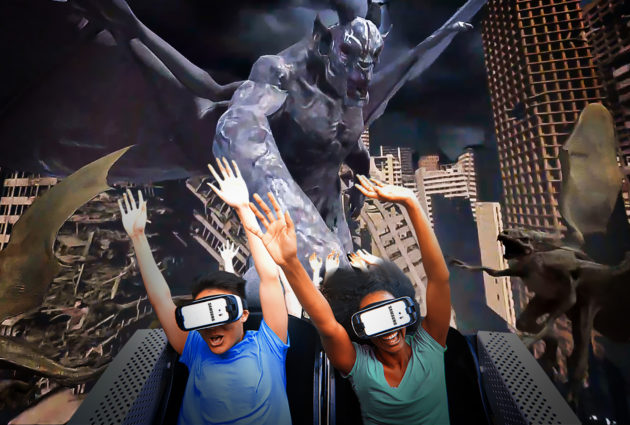 “Six Flags is the leader in innovation and thrills and we are excited to introduce the VR coaster experiences to our guests at Discovery Kingdom,” said Don McCoy, park president. “In Rage of the Gargoyles, the experience is immersive and terrifying as riders shoot at the demons throughout the entire ride ‒ the perfect addition to our Fright Fest line-up.”

Among the thrilling highlights:

High-definition imagery and storytelling that sync with the track configuration creating a one-of-a-kind “real world” to “virtual world” thrill-ride;

For the first time ever on a rollercoaster, riders can engage in interactive gaming throughout the entire ride experience by shooting at flying demons; and

Unique sophisticated head-movement targeting to instantly lock on a moving target without the need for a touchpad or buttons to fire.

The realistic theme puts the rider in the action similar to a video game experience. Riders are pilots seated in the cockpit of an Apache-style helicopter, flying through a devastated cityscape of a dark and dreary future as part of a fleet of choppers ready to battle winged creatures to the end. Both the pilot and their realistic foes are virtually engaged in a battle all while racing over the 2,170 feet of twisting, turning, looping coaster track.

The action starts quickly when riders ascend up the lift hill while realistic, blood-thirsty gargoyles terrorize them by scratching and clawing, jumping mercilessly atop the seemingly fragile glass barrier as the rider tries desperately to shoot their demonic targets. The epic conflict accelerates as riders are forced to navigate through the hazardous city streets, up and over broken-down skyscrapers while avoiding obstacles and lethal assaults from the gargoyles, all the while shooting to repel the demons. It is up to the pilot to attack the vicious master gargoyle, who is vehement on challenging anyone who crosses his path. There is a surprise ending that will be sure to leave riders shocked and amazed.

Kong will close after August and make its Virtual Reality debut with modified restraints and enhanced track work. Guests 13 and older may opt to ride with the VR headset or without, to enjoy Kong as a traditional coaster attraction. Fright Fest is Northern California’s biggest and scariest Halloween event as the park is completely transformed for thrills by day and fright by night, and features haunted mazes, scare zones and “monstertainment.”

Joe Kleimanhttp://wwww.themedreality.com
Raised in San Diego on theme parks, zoos, and IMAX films, Joe Kleiman would expand his childhood loves into two decades as a projectionist and theater director within the giant screen industry. In addition to his work in commercial and museum operations, Joe has volunteered his time to animal husbandry at leading facilities in California and Texas and has played a leading management role for a number of performing arts companies. Joe has been News Editor and contributing author to InPark Magazine since 2011. HIs writing has also appeared in Sound & Communications, LF Examiner, Jim Hill Media, and MiceChat. His blog, ThemedReality.com takes an unconventional look at the attractions industry. Follow on twitter @ThemesRenewed Joe lives in Sacramento, California with his fiancé, two dogs, and a ghost.
Share
Facebook
Twitter
Linkedin
Email
Print
WhatsApp
Pinterest
ReddIt
Tumblr
Previous articleDirector Fernando Meirelles Combines Nature, Music, and the Energy of Brazil to Open the 2016 Rio Olympics
Next articleAmé Strong Heading Rosco Laboratories’ New Architectural Lighting Division