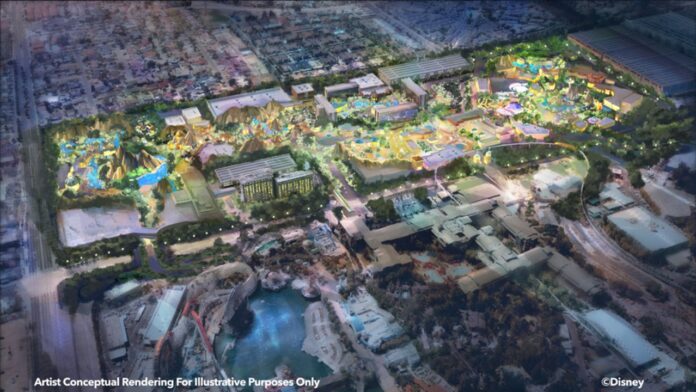 March 28, 2021 — On Thursday, March 25, the Disneyland Resort announced its DisneylandForward campaign, laying the groundwork for future expansion. Concept paintings provided by the resort illustrate expansions of the Disneyland and Disney California Adventure theme parks across West Street, along with the conversion of the Toy Story parking lot, located on a plot of land catercorner to the main resort property, into a retail and entertainment center.

The initial DisneylandForward announcement has been presented in a vague “blue sky” format showcasing generic ideas of what could be, and is not an expansion announcement so much as the initiation of a campaign to set the legal stage for future expansion. Some of the concepts in the plan were approved as far back as 1993, such as the construction of a parking structure to the east of the theme parks. At that time, the current location of the Toy Story lot was also approved as an expansion property to be home to a retail center, hotel, or even a third theme park.

As part of the DisneyForward initiative, Disney is suggesting that new lands and attractions, based on those that have opened or are opening at Disney parks in Japan, China, and Florida, could be built in the proposed theme park expansion areas, eliminating the need to remove classic attractions. As Disney points out that it will be bearing all construction costs on future expansions, cloning existing lands and attractions presents a viable way to reduce design and fabrication overhead. However, it is the proposed expansion of theme park property across West Street that creates the biggest hurdle.

On June 29, 1993, the City of Anaheim approved the Disneyland Specific Plan, outlining the expansion of Disneyland Park and its hotel into a larger resort area comprised of newly acquired parcels of land. In 1994, the Specific Plan was codified into the City of Anaheim Municipal Code as chapter 18.114. Minor amendments have been made to this code over the years, the most recent in 2011.

The entire Disneyland Resort property is considered a single zone. This zone is comprised of six distinct districts:

There are some provisions for cross-pollination within the Disneyland Resort’s districts. Retail and dining are allowed within both the theme park and hotel districts, resulting in Downtown Disney, which stretches from the theme park entrance promenade across West Street to the Disneyland Hotel. Under the current code, the resort is allowed up to 1,025 hotel rooms within the theme park district. The Grand Californian Hotel is home to 948 of them, along with 71 Disney Vacation Club villas, out of the 150 timeshare units allowed under the code for the resort. Additional Disney Vacation Club units, such as those planned for the Disneyland Hotel, are allowed under a conditional use permit.

This is where the DisneylandForward campaign comes into play. In a letter to the residents of Anaheim, Disneyland Resort President Ken Potrock stated:

“Although the Disneyland Resort currently has the development approvals to build additional theme park attractions, hotel rooms, entertainment, retail, dining, shopping and parking, our existing development approvals severely limit the ways in which we can expand and locate our offerings.

“That is why we are launching DisneylandForward, our public planning effort with the city of Anaheim to update our development approvals to meet the current and future demand in entertainment. With these updated approvals, Disneyland Resort will continue to be an industry leader in bringing first-of-a-kind offerings to Anaheim, which in turn will create thousands of new jobs and help support Anaheim’s funding for important services such as fire, police and public schools.

“To be clear, Disneyland Resort is not seeking any public funding in this effort, nor are we seeking to develop any additional square footage or hotel rooms beyond what is already allowed. We are simply working with the city and community to update existing approvals to allow for integrated, immersive experiences to be appropriately placed and built throughout Disney properties.”

One of the primary concerns with building theme parks within the hotel district is its proximity to residential neighborhoods across Walnut Street. In 1993, a neighborhood group campaigned in opposition to the proposed Disneyland Resort expansion. Disney and the City of Anaheim compromised on some of the planned construction impacting the resort’s neighbors. The parking garage design was altered to mitigate noise and visual impact while streets and freeway offramps were rerouted to drive traffic away from residential areas.

A 1993 requirement for operation of a parking lot on the south end of the hotel district and the parking garage to its north was added to benefit the residents on the other side of Walnut Street. The city instituted a sound limit of 60 decibels, the equivalent of a normal conversation or background music, just outside the property line between 7 p.m. and 7 a.m. To further mitigate loud noise reaching the residential neighborhoods, Disney added plexiglass “shout shields” to the then tallest attraction at Disney California Adventure, the 185 foot tall Maliboomer S&S Space Shot ride.

The Disneyland Resort plans to approach the City of Anaheim with more definitive plans by 2023. It points out in its collateral for the DisneyForward initative that “we are simply working with the city and community to update our existing approvals to allow for integrated development to be located and built throughout Disney properties. We are at the very early stages of this effort with the city, and this multiyear process will include many opportunities for public involvement.”

As Ken Potrock shared with the Anaheim community: “At Disneyland Resort, we are taking this time to dream beyond the now and think boldly about the future because bold ideas and thoughtful leadership aren’t just our legacy, they’re our best path forward.”

All images courtesy the Disneyland Resort unless otherwise noted.

Joe Kleimanhttp://wwww.themedreality.com
Raised in San Diego on theme parks, zoos, and IMAX films, InPark's Senior Correspondent Joe Kleiman would expand his childhood loves into two decades as a projectionist and theater director within the giant screen industry. In addition to his work in commercial and museum operations, Joe has volunteered his time to animal husbandry at leading facilities in California and Texas and has played a leading management role for a number of performing arts companies. Joe previously served as News Editor and has remained a contributing author to InPark Magazine since 2011. HIs writing has also appeared in Sound & Communications, LF Examiner, Jim Hill Media, The Planetarian, Behind the Thrills, and MiceChat His blog, ThemedReality.com takes an unconventional look at the attractions industry. Follow on twitter @ThemesRenewed Joe lives in Sacramento, California with his wife, dog, and a ghost.
Share
Facebook
Twitter
Linkedin
Email
Print
WhatsApp
Pinterest
ReddIt
Tumblr
Previous articleUnited Launch Alliance Delta II Rocket joins Rocket Garden at Kennedy Space Center Visitor Complex
Next articleSnowMagic celebrates 20 years of all-temperature snowmaking