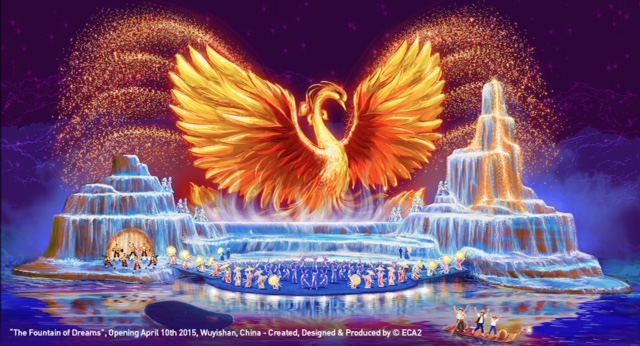 InPark will be covering the April 10 opening of Fountain of Dreams.   Look for our report in Issue 57 this May.

Saint Denis, France — In the town of Wuyishan, at the heart of north-west Fujian’s tranquil tea-growing mountains, something very special is happening.  Already identified as a world heritage site by UNESCO, the region is playing host to “The Fountain of Dreams”, a “spectacular and enchanting tribute” to Wuyishan’s privileged natural setting, using never-before seen techniques to create an unforgettable immersive experience.

At the core of “The Fountain of Dreams” is the simple beauty and power of nature: its generous waters which sculpted the region’s emblematic mountains, and the nine twists and turns of its famous river.  The Wuyishan government chose the French show production company ECA2 for its ability to deliver a complementary turnkey show, rich in exciting light & sound and ground-breaking effects.

Every aspect has been painstakingly developed by ECA2, from show concept and theatrical decor to design of the seating stands, to create a truly remarkable signature show for Wuyishan.  In particular, the waterfall-theatre feature is a world first, designed to bring the spectator inside the action. The monumental waterfall dramatically comes to life, changing form in unexpected ways. The waterfall closely mimics the neighbouring mountains. Terraces in the decor echo the region’s still active teagrowing terraces. Through 12 compelling scenes, the story unfolds of Wuyishan’s fabled waters.

Water curtains are all around, transforming into free-flowing rivers. Flashes, flames, 3D video mapping, LED, lasers, cascading waters, music and ghostly characters from China’s traditional past all interact.  The stage, seating, a pond and even the roof become one unified staging area. Many effects come from amongst the spectators, so the feeling of being “part of the show” or even “part of the scenery” is not just their imagination! 17 metre high showers fall into rivers between the seating. 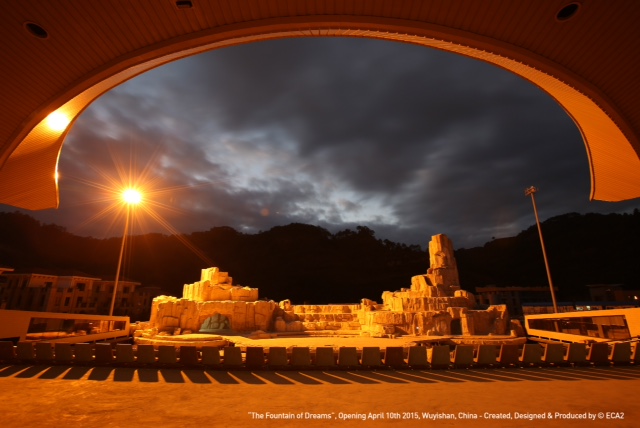 Much of the multimedia magic is thanks to special effects gadgetry concealed within the roof. And what a roof! With its contemporary cantilever design, it seems to float weightlessly. The video mapping posed particularly tricky problems. With images projected onto the irregular 3D shapes of the set, multiple scans had to be made to achieve seamless imagery. One of the biggest surprises comes when a mountain turns into a seated man, an essential character in the story. Other challenges included: 10,000 cubic metres per hour of water perfectly controlled to protect technical equipment; world’s biggest water screen ever, an incredible 30 metres; fireworks that launch from a water-drenched set.

Joe Kleimanhttp://wwww.themedreality.com
Raised in San Diego on theme parks, zoos, and IMAX films, InPark's Senior Correspondent Joe Kleiman would expand his childhood loves into two decades as a projectionist and theater director within the giant screen industry. In addition to his work in commercial and museum operations, Joe has volunteered his time to animal husbandry at leading facilities in California and Texas and has played a leading management role for a number of performing arts companies. Joe previously served as News Editor and has remained a contributing author to InPark Magazine since 2011. HIs writing has also appeared in Sound & Communications, LF Examiner, Jim Hill Media, The Planetarian, Behind the Thrills, and MiceChat His blog, ThemedReality.com takes an unconventional look at the attractions industry. Follow on twitter @ThemesRenewed Joe lives in Sacramento, California with his wife, dog, and a ghost.
Share
Facebook
Twitter
Linkedin
Email
Print
WhatsApp
Pinterest
ReddIt
Tumblr
Previous articleNational Air and Space Museum Unveils Dynamic Sun Video Wall
Next articleThinkwell Group On Track with Hogwarts Express Expansion to London Harry Potter Tour