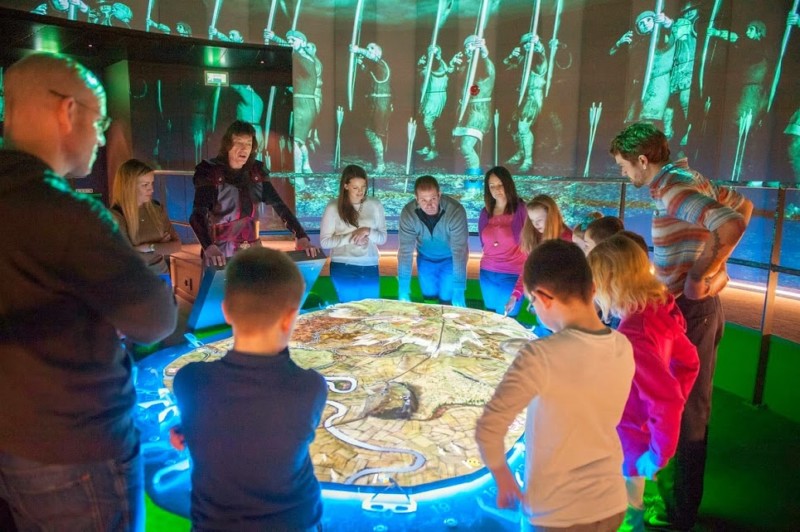 London, UK — In the lead up to the 700th anniversary of Scotland’s Battle of Bannockburn, a new visitor centre at the historic site in Stirling has become the first in the world to use fight choreography and motion capture techniques to immerse visitors in a realistic 3D medieval battle. The complex projection system was designed by Electrosonic’s Design Consulting team and engineered and installed by Electrosonic’s Edinburgh office under sub-contract to lead design consultancy Bright White Ltd.

The Battle of Bannockburn in 1314 was one of the most decisive battles of the First War of Scottish Independence and an iconic cornerstone in Scottish history. It pitted King Robert the Bruce of Scotland against the English King Edward II and resulted in a complete Scottish victory. The National Trust for Scotland’s new Battle of Bannockburn Visitor Centre opened on 1 March 2014, transporting visitors back in time to the 1314 battle and has been an instant success.

Electrosonic was called in at the early stage of the design process to give advice on the most suitable technology to fit the space and budget and most importantly to verify that the technology could achieve the design ideas. 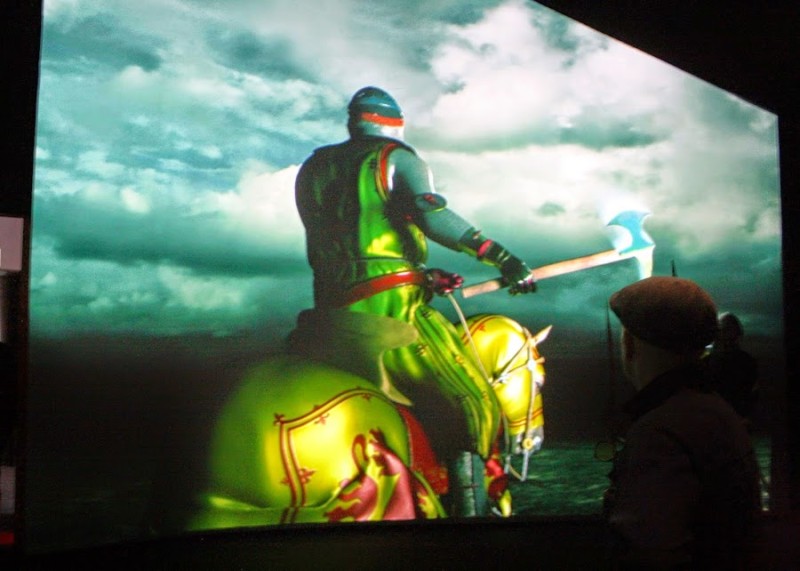 Electrosonic and Bright White Ltd. partnered to design and engineer the centre’s fully automatic life-size 3D show presentation systems.  They begin with the Prologue’s puppet theater-style 3D presentation, which introduces visitors to some of the main characters and circumstances leading up to the battle.  Next, four large screens in the Prepare for Battle exhibition use Panasonic projectors to present a continuous sequence of spectacular, life-size 3D images.

Visitors are placed right in the middle of the action. Standing shoulder-to-shoulder with warriors and weapons, visitors not only learn about the medieval battle but really experience the emotions of war as they duck longbow arrows shot across the space.

Behind two of the screens are five Character Stations showing ten historical or generic fictional characters who played a part in the battle.  Each Character Station uses two narrow-bezel 46-inch NEC LCDs to produce a life-size 2D animated portrait that comes to life when the visitor stands in front and gestures.

The films shown in Prepare for Battle and in the Character Stations were developed by 3D modelers at the Centre for Digital Documentation and Visualisation (CDDV), a partnership between the Glasgow School of Art’s Digital Design Studio and Historic Scotland, under contract to Bright White Ltd.  Although the films were computer generated, all live action was based on real people using both laser scan and motion capture techniques and authenticated using an Academic Panel featuring some of the UK’s top historians. 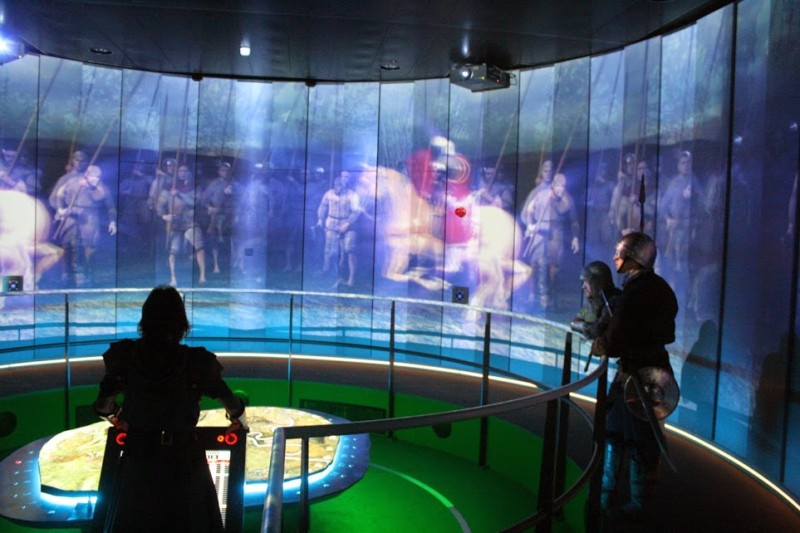 A circular space houses the signature Battle Room. Visitors can choose to watch a 10-minute Battle Show or they can play or observe a 40-minute Battle Game, in which advanced booking is necessary for participation.

Visitors enter the Battle Room at an upper level so they can look down on the battle map.  Game participants who have entered the space at floor level take command of the knights and soldiers competing on the virtual battlefield.  Up to 30 visitors can play the game, which is controlled by the Battlemaster who also offers visitors advice. The Battlemaster operates a twin Winsonic touch screen console. The interactive elements of the game allow visitors to make ‘battle decisions’ that will affect an entire army, an experience that they will not forget.

A massive 3D map of the Stirling landscape gives a bird’s-eye view of the battle.  The Battle Game is based on a relief representation of the terrain, onto which two projectiondesign projectors map terrain details and all the troop movements in a 2.5D technique that mimics a three-dimensional display.

At the conclusion of the game, visitors finish their tour with the Epilogue show, which follows the same format as the Prologue and is equipped with Panasonic projectors for 3D projection and a 7thSense Delta Duo media server.

“There are very few companies who have the technical expertise and experience to be able to design, install and maintain such a sophisticated and immersive audio visual experience that involves synchronised systems,” commented Tom Ingrey-Counter, Interpretation Sub-Project Manager for the visitor centre. “For the National Trust of Scotland this has been a very adventurous project and we’ve really relied on the expertise of Electrosonic to deliver it and I testify to the quality of the service provided.”

Each projection screen for 3D images is equipped with two projectors with appropriate filters.  The screens themselves are part of the exhibition structure painted with a special Ultra Silver 3D Goo paint to preserve linear polarization.

To ensure the continual and reliable operation of the Battle Game, Electrosonic installed dual PCs in a redundant configuration of primary and secondary. The PCs run the Battlemaster control and feed graphics to the projectors; the Battlemaster can switch between them within seconds at a touch of a button from the console and continue the game without disturbing customers should anything happen. 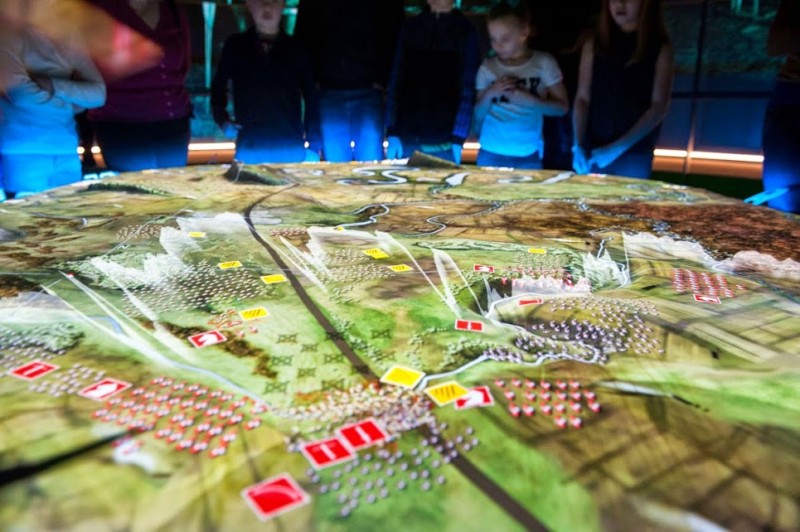 All equipment have a network connection for control and monitoring, and overall system control is by a standard AMX room control system.  A wireless AMX touch panel allows for remote control anywhere within the exhibition.

The source and control equipment are rack mounted in a central control room. The installation follows Electrosonic’s preferred practice for sites of this kind with all site cabling terminated in suitable socket boxes. This allows all site cables to be properly terminated and tested in advance. The racks were factory built at Electrosonic’s Dartford office and arrived on site with cable and plug assemblies that plugged into the waiting sockets. This minimized installation time and provided a more reliable and maintainable system.

“The quality of Electrosonic’s technical design for resilient systems is excellent, and is a key aspect of the project; no matter how creative the team is, if the system doesn’t enjoy 99%+ uptime, then all is lost,” commented Chris Walker, MD of Bright White Ltd. “Electrosonic worked admirably with the designers, the operators and Bright White’s media contractors to provide one of the most intelligent and advanced AV systems we are aware of in the museums sector.”

Joe Kleimanhttp://wwww.themedreality.com
Raised in San Diego on theme parks, zoos, and IMAX films, InPark's Senior Correspondent Joe Kleiman would expand his childhood loves into two decades as a projectionist and theater director within the giant screen industry. In addition to his work in commercial and museum operations, Joe has volunteered his time to animal husbandry at leading facilities in California and Texas and has played a leading management role for a number of performing arts companies. Joe previously served as News Editor and has remained a contributing author to InPark Magazine since 2011. HIs writing has also appeared in Sound & Communications, LF Examiner, Jim Hill Media, The Planetarian, Behind the Thrills, and MiceChat His blog, ThemedReality.com takes an unconventional look at the attractions industry. Follow on twitter @ThemesRenewed Joe lives in Sacramento, California with his wife, dog, and a ghost.
Share
Facebook
Twitter
Linkedin
Email
Print
WhatsApp
Pinterest
ReddIt
Tumblr
Previous articleChance Rides GXL 200 Takes National Harbor to New Heights
Next articleS&S Helps Rebuilding of Casino Beach Pier With New Double Shot Tower