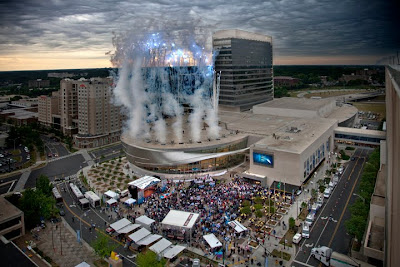 Burbank, Calif. USA — Fans racing to be among the first visitors to the new NASCAR Hall of Fame in Charlotte, North Carolina will discover some of the most cutting-edge AV technology supporting the interactive motor sports attraction. Working with an aggressive schedule, Electrosonic provided AV systems for the Belk High Octane Theater and more than 100 exhibits as well as interior and exterior giant video displays and supporting sound systems. 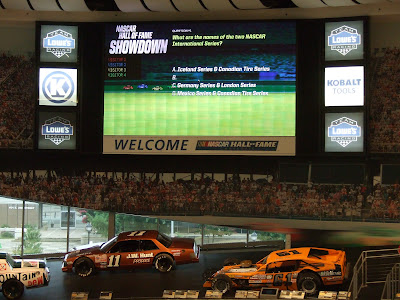 The Electrosonic contribution to the NASCAR Hall of Fame helps bring fans closer to the sights and sounds of the sport from the Belk High Octane Theater to the displays in front of the exhibits. Electrosonic began work on the project in late 2008 during the final design phase. The company supplied a wide variety of imaging technology for over 100 complex linear media and interactive displays and features, including LCD and plasma displays, single and triple DLP projection, MicroTiles and the exterior LED board. Electrosonic also deployed RFID technology to customize each visitor’s experience. 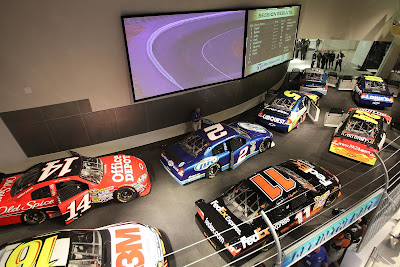 Electrosonic’s contributions to the NASCAR Hall of Fame begin when visitors approach the entrance and see a 28-foot wide Panasonic LED board with a high-powered sound system mounted to the façade. Designed to engage the Ceremonial Plaza space, the LED board can display live video or pre-produced elements.

Upon entry visitors are issued hard-card tickets to the attraction. Electrosonic tapped RFID technology to customize the experience for each person as they insert their cards into numerous check-in stations throughout the exhibits. 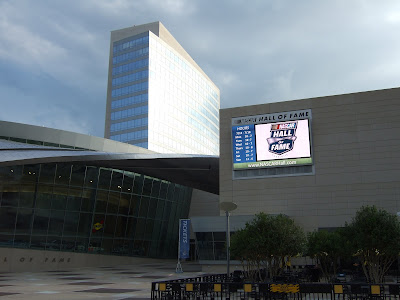 Visitors are treated to an intense 12-minute history of NASCAR in the 278 seat Belk High Octane Theater where Electrosonic has enabled an impressive triple projection featuring Christie DLP projectors onto the curved 64 foot wide screen and more than 10,000 watts of sound. The cars rumble across the screen from one end to the other giving the audience the feel of being there. Another attention-getting display awaits as they exit to The Great Hall, the main level’s huge open area, where a 14×18-foot Fan Billboard is composed of 252 high resolution Christie MicroTiles and driven by a Christie Vista Spyder X20. Supported by another high-powered sound system the Fan Billboard displays live video, including races, and pre-produced media; it also has an interactive game component.

Electrosonic has peppered Glory Road, a banked ramp that simulates the banking (up to 33 degrees) at a number of tracks, with an array of video monitors. The road leads to the second floor, with additional monitors. They enhance exhibits of 18 historic cars and information about the 46 current and historic tracks on the NASCAR circuit. Glory Road terminates in the Hall of Honor where the Hall of Fame inductees are enshrined. There, Electrosonic has configured a 16-channel WATCHOUT-blended oval projection system with Panasonic projectors. “It was a real challenge blending 16 projectors into a massive 150-foot oval,” Abelowitz reports.

Exiting the Hall of Honor visitors move on to Race Week Experience, a behind-the-scenes look at how a NASCAR team prepares for race day. “They begin to use their customized hard cards at this point,” says Abelowitz. The cards are inserted into touchscreen kiosks throughout the exhibit and in the fourth-floor Heritage Speedway galleries and small break-out theaters.

In total there are 75 interactive exhibits in the space, 20 projected linear exhibits and 20 linear displays. “With so many exhibits we had to control audio feeds with directional audio speakers small and large,” Abelowitz notes. Interactive exhibits include: Media Broadcast Area, where guests learn what it takes to broadcast races live through touch screens, headsets, monitors and consoles; Period Milestones, which allows guests to experience a bit of NASCAR history by answering trivia questions; and an interactive map of North America highlighting the current race tracks and race shops allowing visitors to learn about those venues.

Throughout the project Electrosonic partnered with local AV contractors in a small-business initiative that kept a significant amount of purchasing in the Charlotte area. Electrosonic is providing, at no additional cost to the client, an onsite service technician for one year to guarantee smooth systems operation.

“Electrosonic provided excellent service from the initiation of their involvement in the project. Their management team was highly responsive to the Owner’s needs. Electrosonic is a trust-worthy company with the technical knowhow to complete a complicated project in a short amount of time,” commented Kathleen Drake, Project Manager at the City of Charlotte.

“The Electrosonic team was a critical partner in the successful completion, opening and early months of operations of the NASCAR Hall of Fame,” adds Winston Kelly, executive director, NASCAR Hall of Fame. “The NASCAR Hall of Fame is one of the most complex endeavors undertaken by all parties involved. We had some very challenging deadlines that were critical to meet in order for us to open on schedule and within budget. All this required exceptional coordination, cooperation and communication. Regardless of the circumstances, the Electrosonic team met those challenges to ensure we are providing a quality product and experience for our guests.”

The NASCAR Hall of Fame is owned by the City of Charlotte, licensed by NASCAR and operated by the Charlotte Regional Visitors Authority.

Judith Rubin
Judith Rubin ([email protected]) is a leading journalist, publicist, strategist, blogger, content marketing specialist and connector in the international attractions industry. She excels at writing about all aspects of design and technical design, production and project management. Areas of special interest include AV integration and show control, lighting design and acoustics, specialty cinema, digital video and world’s fairs. Judith has ties to numerous industry organizations. From 2005-2020 she ran communications, publications and social media for the Themed Entertainment Association (TEA). In 2013, she was honored with the TEA Service Award. She was development director of IMERSA, and co-chair of the 2014 IMERSA Summit. She was publicist for the Large Format Cinema Association in the 1990s, now part of the Giant Screen Cinema Association (GSCA) and has also contributed to the publications of PLASA, IAAPA and the International Planetarium Society. Already making her mark as a magazine and book editor, Judith joined World’s Fair magazine in 1987, which introduced her to the attractions industry. Launching as a freelancer in the mid 1990s she has contributed to dozens of publications and media outlets including Funworld, Lighting&Sound America, Sound & Communications, Urban Land, The Raconteur and The Planetarian. She joined InPark in 2010. Judith earned a Bachelor of Fine Arts from Pratt Institute. She has lived in New York City and the San Francisco Bay Area, and now makes her home in Saint Louis, where she is active in the local arts and theater community.
Share
Facebook
Twitter
Linkedin
Email
Print
WhatsApp
Pinterest
ReddIt
Tumblr
Previous article
Blockbuster Museum Exhibitions: Superbreak Launches Book of the Dead Package
Next article
Lighting Design: Scharff Weisberg Lights President Obama