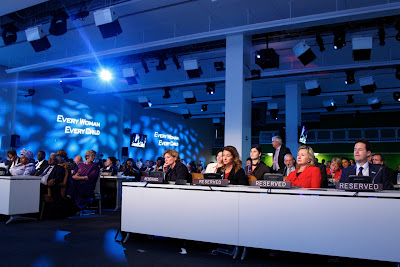 New York (November 5, 2010) –- It’s fall in New York and the 65th Session of the United Nations General Assembly has kicked off a round of international events and meetings at the headquarters of the world body. Scharff Weisberg provided lighting and audio support for three key events: the South Sudan Multilateral Meeting (SSMM) produced by The White House and the back-to-back Every Woman, Every Child event (EWEC) and the African Leaders Malaria Alliance meeting (ALMA) both produced by J. Marshall Events Inc.

Scharff Weisberg supplied a lighting package for the SSMM specifically to light President Barack Obama. Natasha Jameson-Randolph was lighting designer for the gathering convened by UN Secretary-General Ban Ki-moon and addressing a region often tragically in the headlines the last few years.

“I’ve been told that these were the best-looking events of the whole summit,” says Julie-Ann Marshall, head of J. Marshall Events Inc, who regularly plans high-level events at the UN and for numerous international agencies. “People were really amazed how they stood out from more than 100 events”.

“The ECOSOC Chamber was a new room with electrics and lighting that were unknown to all of us. It was the first time that the General Assembly was done in that room, and I wanted to make sure that our events didn’t come off as second-rate. So I worked with Scharff Weisberg and LD Barrett Hall to let them know the signature colors and logos for the two events, and they developed gobos that could be switched to give the perspective of two different rooms for those watching on television.”

In addition to lighting equipment for EWEC and ALMA, Scharff Weisberg also supplied podiums, wireless mics, and wireless and wired headsets for the events.

Scharff Weisberg and Video Applications are collaborating partners to clients requiring unique and imaginative solutions for their event, spectacle and large-meeting lighting, sound and video needs whether local, national or worldwide.

Judith Rubin
Judith Rubin ([email protected]) is a leading journalist, publicist, strategist, blogger, content marketing specialist and connector in the international attractions industry. She excels at writing about all aspects of design and technical design, production and project management. Areas of special interest include AV integration and show control, lighting design and acoustics, specialty cinema, digital video and world’s fairs. Judith has ties to numerous industry organizations. From 2005-2020 she ran communications, publications and social media for the Themed Entertainment Association (TEA). In 2013, she was honored with the TEA Service Award. She was development director of IMERSA, and co-chair of the 2014 IMERSA Summit. She was publicist for the Large Format Cinema Association in the 1990s, now part of the Giant Screen Cinema Association (GSCA) and has also contributed to the publications of PLASA, IAAPA and the International Planetarium Society. Already making her mark as a magazine and book editor, Judith joined World’s Fair magazine in 1987, which introduced her to the attractions industry. Launching as a freelancer in the mid 1990s she has contributed to dozens of publications and media outlets including Funworld, Lighting&Sound America, Sound & Communications, Urban Land, The Raconteur and The Planetarian. She joined InPark in 2010. Judith earned a Bachelor of Fine Arts from Pratt Institute. She has lived in New York City and the San Francisco Bay Area, and now makes her home in Saint Louis, where she is active in the local arts and theater community.
Share
Facebook
Twitter
Linkedin
Email
Print
WhatsApp
Pinterest
ReddIt
Tumblr
Previous article
Electrosonic Enhances the NASCAR Hall of Fame Visitor Experience with Cutting-Edge AV Technology
Next article
Jeff Rosen to direct project development at The Hettema Group