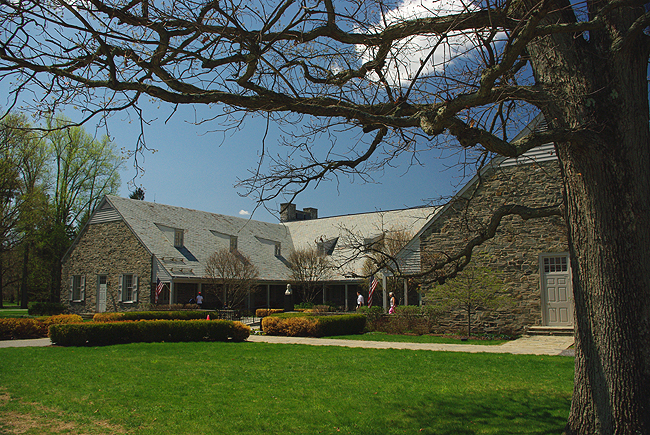 Los Angeles, CA, USA — The Franklin D. Roosevelt Presidential Library and Museum in Hyde Park, New York, has reopened after a three-year refurbishing of the building which FDR gave to the nation through the National Archives.  It not only includes his extensive presidential papers but also Roosevelt’s collections of ship models, rare books, coins and diplomatic gifts received from other governments.  AV systems integration by Electrosonic, working under exhibit fabricator Explus, supports the museum’s narrative and helps visitors interpret a large array of exhibits. 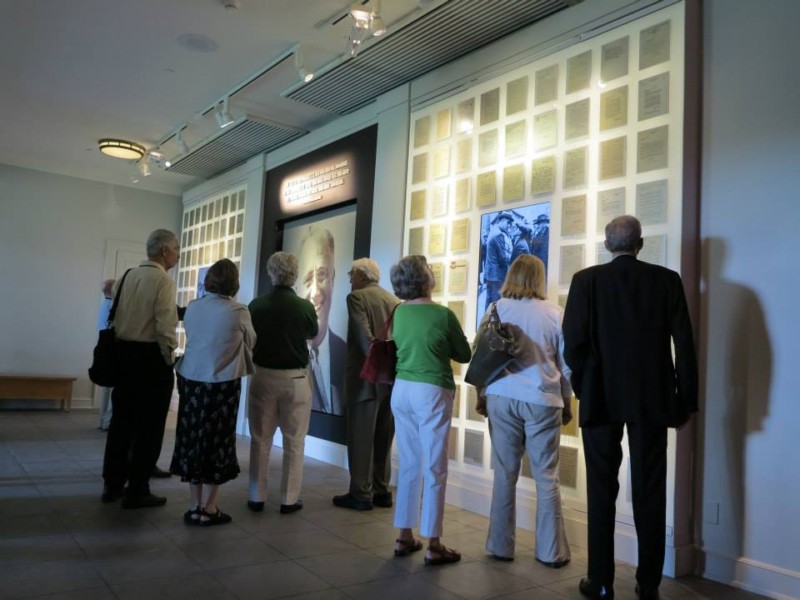 A large portrait of FDR, hung between a pair of 55-inch Samsung LCD screens showing film footage of the president, dominates the entrance to the museum.  The first galleries set the scene of his presidency with an exhibit on the Great Depression and a theater presentation, “The World in Crisis.”

The theater space is surrounded by a jagged collage of graphic images depicting the sufferings of the early 1930s.  The content is displayed on a large screen by a projectiondesign F32 video projector and accompanied by 5.1 surround sound; it features newsreel footage documenting the economic crisis at home and abroad and how, in some cases, it led to the emergence of extremist politics. 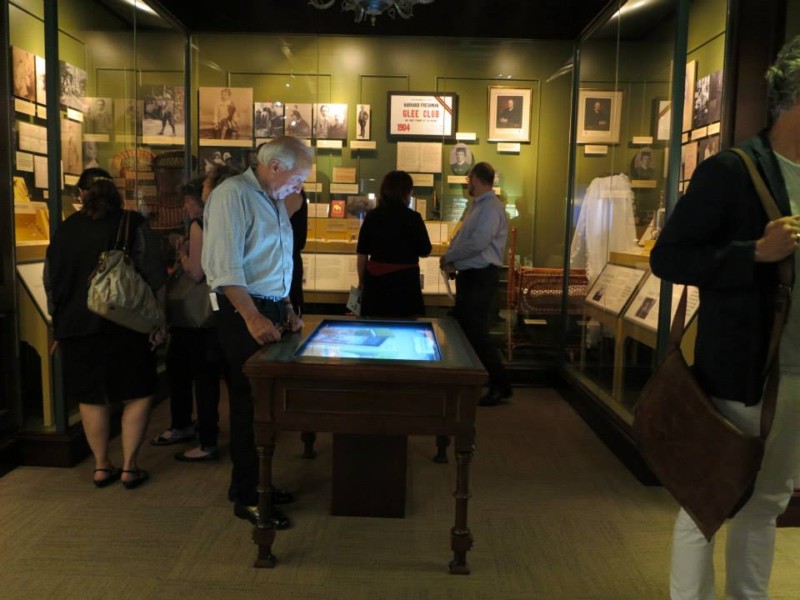 Nearby, the “Promise of Change” exhibit includes an interactive display about the causes of the Depression; “Foundations of a Public Life,” features personal mementos and an interactive table based on a 46-inch Primeview Quad Touch monitor, which operates as a giant scrapbook detailing the Roosevelts’ privileged upbringings and lives of public service.  A 55-inch Samsung LCD with stereo audio describes the turning point in FDR’s life in the “Polio Theater” and how he was able to conceal his condition, in large part, from the public.

A pair of exhibits demonstrates how FDR became the first president to understand the importance of radio communication with the nation.  One recreates the experience of listening to his Fireside Chat broadcasts with vignettes of a suburban kitchen and dining room; visitors select recordings of FDR’s informal chats and hear them through radio sets of the era.  Questions and responses from the public are heard through overhead loudspeakers.

A major exhibit on the New Deal and FDR’s second term is followed by a view of the president’s private study and a gallery devoted to World War II.  The wartime exhibit includes “FDR’s Secret Map Room” with image projections on the wall from a projectiondesign F22 video projector, plus three multi-user map tables each equipped with a Primeview multi-touch touchscreen showing maps and two 1940s telephones. 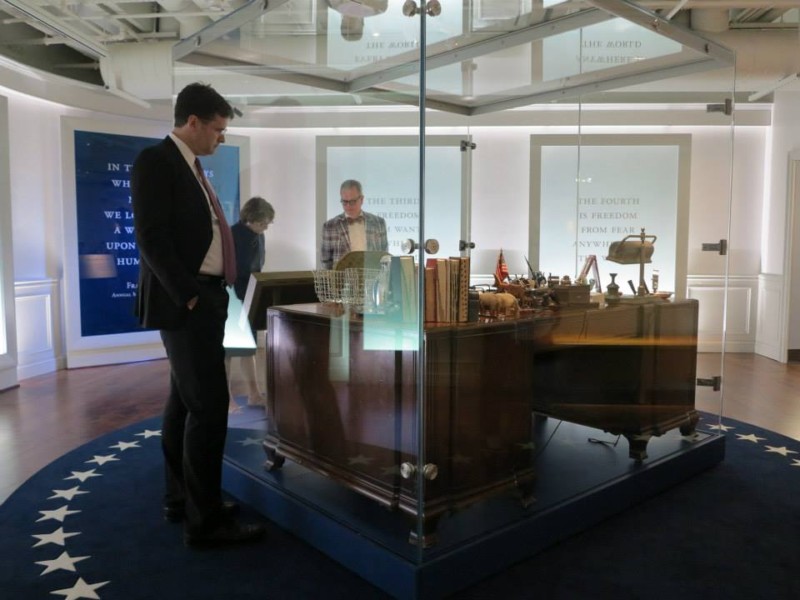 Next, visitors descend to the basement where they view the president’s Oval Office desk and its amazing collection of objects, interpreted by a touchscreen display; FDR’s Ford automobile, modified with hand controls so he could drive; representative exhibits from his collections of ship models, paintings, sculptures and furniture; a portion of the presidential archives; and a gallery devoted to First Lady Eleanor Roosevelt.

The “Legacy Theater” presents an assessment of FDR’s achievements.  Additional theaters, which feature 55 or 70-inch Samsung LCD screens or projectiondesign F22 and F32 projection systems, are scattered throughout the museum and address “The Enduring New Deal,” “Pearl Harbor” and “Newsreel” topics.

Electrosonic standardized the equipment as much as possible in the refurbished museum to minimize the amount of different gear and to promote easy operation and maintenance.  A control room in the basement behind the theater houses source equipment for the exhibits.  All linear video is run at 1080p from BrightSign HD1020 players.  Displays are largely fed using CAT-6 cables and Extron DTP DVI 301 extenders.

Totevision 15 and 19-inch LCDs are featured in the exhibits; many 22-inch touchscreens are all-in-one Elo E531206 units with built-in computers. 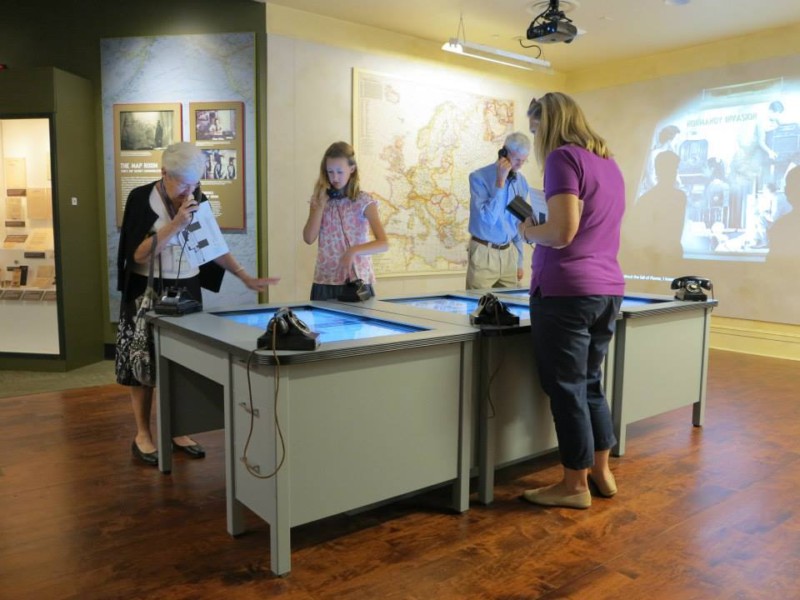 All show audio is processed through a Peavey MediaMatrix DSP system and Crown 8-channel amplifiers, and shared across exhibits as appropriate; smaller exhibits have their own amps.

Lynn Bassanese, Director of the Franklin D. Roosevelt Presidential Library and Museum, commented, “The audio, video and multimedia programs and the innovative interactives in the new FDR Museum give our visitors a  fresh insight into the lives and careers of Franklin and Eleanor Roosevelt.  They truly help us bring the new deal to a new generation.”

All exhibit AV equipment is centrally controlled with Medialon Manager.  Theater shows are started by proximity sensors, and docents can select individual exhibits via Apple’s iPad.

“The renovation of the audio-visual technology at the FDR library significantly enhances the visitor experience with the modern delivery of media and information.  The migration from 3-ring binder paper flip books to digital touch screen flip books is a classic example of this,” concluded Bryan Abelowitz, Electrosonic’s Senior Systems Consultant.

The new museum displays were designed by Gallagher & Associates with exhibit fabrication and fit out by Explus.  AV content was created by Cortina Productions with linear AV content by Monadnock Media.  David Rome was the AV consultant.

Joe Kleimanhttp://wwww.themedreality.com
Raised in San Diego on theme parks, zoos, and IMAX films, InPark's Senior Correspondent Joe Kleiman would expand his childhood loves into two decades as a projectionist and theater director within the giant screen industry. In addition to his work in commercial and museum operations, Joe has volunteered his time to animal husbandry at leading facilities in California and Texas and has played a leading management role for a number of performing arts companies. Joe previously served as News Editor and has remained a contributing author to InPark Magazine since 2011. HIs writing has also appeared in Sound & Communications, LF Examiner, Jim Hill Media, The Planetarian, Behind the Thrills, and MiceChat His blog, ThemedReality.com takes an unconventional look at the attractions industry. Follow on twitter @ThemesRenewed Joe lives in Sacramento, California with his wife, dog, and a ghost.
Share
Facebook
Twitter
Linkedin
Email
Print
WhatsApp
Pinterest
ReddIt
Tumblr
Previous article
Jonathan Barker of SK Films Discusses How “Flight of the Butterflies” Became a Large-Scale Model of Multiplatforming
Next article
Alcorn McBride Brings Lincoln Alive at Lincoln College’s Lincoln Heritage Museum in Lincoln