Leading up to the opening of the new Fear the Walking Dead Survival attraction, the most common question seemed to be: What exactly is it?

It was a fair question. Prior to its unveiling, developers and owners were tight-lipped about what was hidden inside the 10,000 square foot space on Fremont Street in downtown Las Vegas. Now that it’s open, the challenge lies in accurately describing it.

At its core, Fear the Walking Dead Survival is a walkthrough attraction that combines highly themed sets, brief, actor-led experiences, haunted house elements and a simulator ride – all comprising a new platform for experiencing the world of the TV show in a new and visceral way. Triotech licensed the brand from AMC, producer of the “Fear the Walking Dead” TV show (a spin-off and prequel to the popular “The Walking Dead” series) and created the attraction based on components from specific episodes in the show.

However, it’s not fair to parse the attraction into those components. It’s really a fully integrated, immersive experience. In other words, the whole is greater than the sum of the [body] parts.

Triotech, a Canadian company most widely known for its simulator rides and games designed for FECs and theme parks, developed the idea for the experience nearly two years ago. “Fear the Walking Dead is characterized by strong storytelling elements as well as action and thrill,” explains Triotech founder and CEO Earnest Yale. “These are also the key elements that make a top-notch attraction and therefore we thought this would make a superb basis for our next design.”

After creating the concept, Triotech sought an operational partner to help develop the attraction. They identified Fremont Street Experience, which operates the SlotZilla zip line in downtown Las Vegas, as an ideal partner and began negotiations.

Triotech designed the entire attraction – each room, storyline, gameplay, software and the technology – in accordance with AMC’s intellectual property. Triotech says the process hinged on creating an experience that would put guests “in the show” – cast into the world of Fear the Walking Dead. Because the series is built upon a narrative of mystery, uncertainty, and psychological elements, the objective was to replicate this atmosphere and remain true to the brand. The core gameplay systems and overall design were handled in-house by Triotech and certain other specialties such as fabrication were subcontracted.

Triotech maintains an interest in the project (similar to a revenue-share mode) and it’s the type of vendor-operator partnership the company is committed to pursuing. “It is important for Triotech to remain on the cutting edge. Attraction ticket sales provide a steadier income stream than projects and allow us the resources to develop the next concept and technology,” says Yale. “The key is having a balance between development and operations.” It’s a business model that appears to be gaining popularity in the industry. When a vendor becomes an operator it generates an obvious income stream diversification for them but also provides a testing ground for new ideas and concepts (think: Mack Rides – Europa Park). 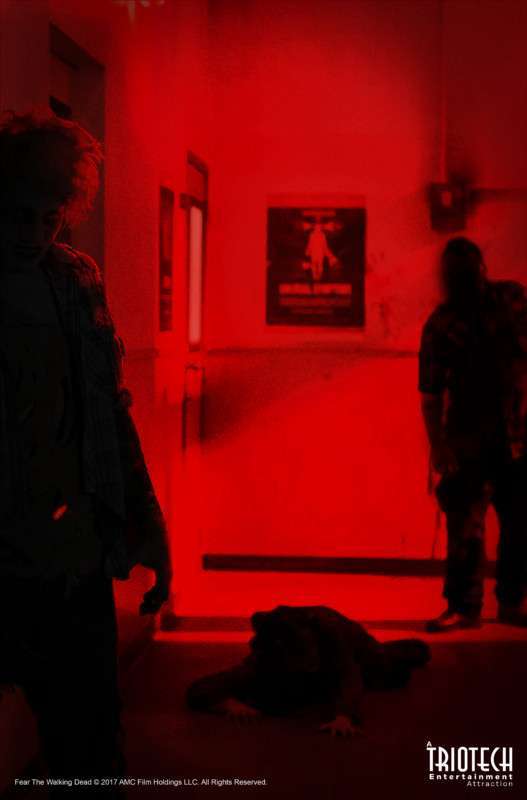 After purchasing a timed-entrance ticket, guests are led in groups of 12 into an environment designed as a militarized school campus. There, they are guided by actors through a series of rooms and activities including body scanning, decontamination, a few escape-room-style puzzles, a simulated elevator experience and haunted house maze.

All this leads up to the experience finale, where guests don 3D glasses and board a “transport vehicle” that will whisk them away to safety. Two rows of seats are placed back to back, so six guests are looking outside of the left side of the “vehicle” and six guests look out the right side. In front of each group of guests stretches a 10’x25’ screen. The seats are on a motion base and they rock and shift enough to enhance the experience but not so much as to require belts or restraints. This adds to the urgency of the storyline and also facilitates a quick load/unload process. Guests pick up themed weapons to defend themselves from the Walking Dead who are attacking their vehicle.

Triotech chose to sub-divide the experience in zones. Each zone has its own situation and psychological signature: Expectation, Unknown, Stress, Threat, Danger, Fear, Fight and Escape. They used those concepts as keys to designing the experience and determined that a crescendo approach would be best.

The team constructed the entire attraction at their home office in Montreal. The proximity to the creative team, the engineering group, software specialists and all others involved in the design allowed major adjustments as well as fine-tuning of details. It also made it easier to adapt the experience after testing with focus groups.

“The biggest challenge was ensuring flow and a steady throughput,” says Yale. “We had to design so that not only the experience would be fun but that people would spend a precise amount of time in each room or stage of the attraction.” Triotech accomplished this with a combination of live actors, technology, and storytelling.

Fear the Walking Dead Survival has been compared to an earlier, ground-breaking attraction that was popular in Las Vegas: Star Trek: The Experience, which ran at the former Las Vegas Hilton from 1998-2008. Both rely on IP-driven, highly themed walk through experiences punctuated with technology and entertainment components, all enhanced by talented actors. Fear the Walking Dead Survival actually hired a veteran of the Star Trek attraction to help coach the new team on the importance of developing their character and creating the best guest experience possible.

The present attraction benefits from advances in technology that enhance immersiveness. Unlike the Star Trek attraction, all of Walking Dead’s media content is digital, and so in addition to being able to tweak actor performances to enhance and improve the attraction over time, the media content can also be changed out easily. This provides Triotech with the flexibility in the long run to change or update the storyline to drive repeat visitation.

Star Trek: The Experience opened when Vegas was still more or less in a period of identifying itself as a family destination, with themed resorts, attractions and waterparks. The city largely drifted from those plans in the early 2000s as it refocused on luxury experiences and high-end shopping. Today, Fear the Walking Dead Survival might be representative of another shift in Vegas – the shift toward one-of-a-kind experiences that complement gambling and shopping, such as the High Roller observation wheel and zip lines on Fremont Street and at The Rio.

According to Yale, the development of themed entertainment attractions around the world will continue to increase for the foreseeable future. He sees two reasons for this growth. “First, guests are getting used to more ‘immersion’ in their entertainment experiences. Second, entertainment itself is being integrated into other experiences, such as shopping,” explains Yale. “In particular, tourists flock to Las Vegas and they are looking for more than just gambling. They are looking for shows and experiences that they can’t find elsewhere.”

That doesn’t mean Vegas is the only spot where such an attraction could work. Yale confirmed that Fear the Walking Dead Survival can be opened in other locations, subject to AMC’s approval. For the time being, however, Fremont Street will remain home to this innovative attraction that nearly defies explanation. “Part of the value is the mystery,” explains Yale. “To fully immerse guests in the world of Fear the Walking Dead, it’s helpful if they are a little unsure and uneasy about what they are about to experience.” •

Joe Kleimanhttp://wwww.themedreality.com
Raised in San Diego on theme parks, zoos, and IMAX films, InPark's Senior Correspondent Joe Kleiman would expand his childhood loves into two decades as a projectionist and theater director within the giant screen industry. In addition to his work in commercial and museum operations, Joe has volunteered his time to animal husbandry at leading facilities in California and Texas and has played a leading management role for a number of performing arts companies. Joe previously served as News Editor and has remained a contributing author to InPark Magazine since 2011. HIs writing has also appeared in Sound & Communications, LF Examiner, Jim Hill Media, The Planetarian, Behind the Thrills, and MiceChat His blog, ThemedReality.com takes an unconventional look at the attractions industry. Follow on twitter @ThemesRenewed Joe lives in Sacramento, California with his wife, dog, and a ghost.
Share
Facebook
Twitter
Linkedin
Email
Print
WhatsApp
Pinterest
ReddIt
Tumblr
Previous article
Delight & Outrage
Next article
Riding the Eye