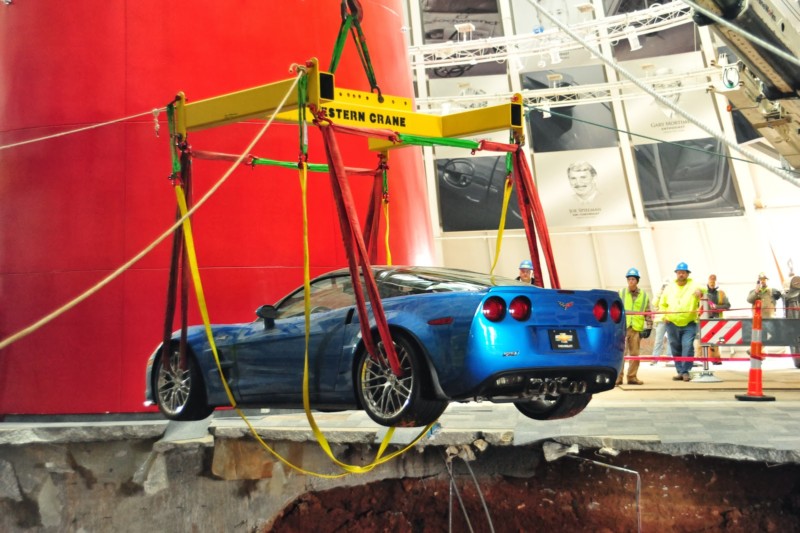 Bowling Green, KY, USA (March 3, 2014) — Crowds of construction personnel, media, Museum visitors and staff cheered as the first Corvette, the 2009 “Blue Devil” ZR1 emerged from the depths of the sinkhole this morning at approximately 10:35am CT. The process was streamed live on two of the Museum’s web cams with thousands of viewers tuning in all over the world.

“It’s wonderful… just seven more to go,” said Mike Murphy, construction manager for the project.  Even more cheers erupted when the car cranked up after only a few tries, and even drove about 20 feet to the doorway of the Skydome.  added Murphy.

The crews have been working six days a week since the sinkhole incident that swallowed eight Corvettes in the National Corvette Museum’s Skydome exhibit area. This past Saturday, the crews rigged up the ZR1 and did a few test lifts. John Spencer, Manufacturing Integration Manager at the GM Corvette Assembly Plant, helped consult the team on the best points to strap up the car. “With Mike, worker safety is number one. There are no compromises,” said Spencer.

“I was worried about the wheels,” said Murphy. “This morning we took so long because we wanted to add some secondary straps in case the wheels pulled. It was just a little more insurance.”  Murphy added that with this project, nothing is set in stone on how to do it. “It’s been a huge relief. It went better than expected,” he said.

The Museum plans on displaying the cars as they are recovered, now through August 3. In addition, this Spring they plan to create a special display with information on the sinkhole incident, sinkholes and karst background details, videos, photos and more.

After taking a lunch break, the crew will resume the car retrieval process – with the 1993 “Ruby Red” 40th Anniversary Corvette slated for recovery Monday afternoon. The 1962 Black Corvette is planned to be retrieved on Tuesday, but will be much trickier as a five ton slab of concrete is partially resting on the front of the car. Two cranes will be used to simultaneously lift the car and the concrete.

Joe Kleimanhttp://wwww.themedreality.com
Raised in San Diego on theme parks, zoos, and IMAX films, InPark's Senior Correspondent Joe Kleiman would expand his childhood loves into two decades as a projectionist and theater director within the giant screen industry. In addition to his work in commercial and museum operations, Joe has volunteered his time to animal husbandry at leading facilities in California and Texas and has played a leading management role for a number of performing arts companies. Joe previously served as News Editor and has remained a contributing author to InPark Magazine since 2011. HIs writing has also appeared in Sound & Communications, LF Examiner, Jim Hill Media, The Planetarian, Behind the Thrills, and MiceChat His blog, ThemedReality.com takes an unconventional look at the attractions industry. Follow on twitter @ThemesRenewed Joe lives in Sacramento, California with his wife, dog, and a ghost.
Share
Facebook
Twitter
Linkedin
Email
Print
WhatsApp
Pinterest
ReddIt
Tumblr
Previous articleGateway Ticketing User Group Meeting to Take Place at Denver Museum of Nature and Science August 11-14
Next articleTennessee Aquarium Introduces Mobile App

The Governor, the Ark, and the Abandoned Park