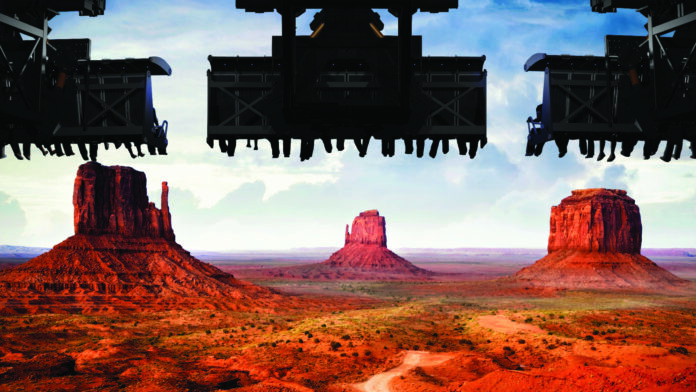 Editor’s Note: This post was updated on Thurs., Aug. 5, 2021, to include the opening date for the attraction (Sept. 1, 2021) and include the mention of Brogent Technologies, Inc.

FlyOver, the new flight ride attraction coming to the Las Vegas Strip on Sept. 1, 2021, revealed its official trailer along with its creative team. This multi-sensory journey will take guests over the American West’s most iconic locations and natural wonders as part of this cutting-edge entertainment experience.

Created by parent company Pursuit, FlyOver’s “The Real Wild West” will immerse guests in iconic destinations within Nevada, Oregon, Washington, Montana, California, Arizona, New Mexico and Utah, all shot from the vantage point of a helicopter in sharp, stunning high definition. The visuals will be heightened by a pre-show moment, followed by a trip over FlyOver’s 52.5-foot spherical screen on a moving platform that enables guests to feel every sweeping movement of the adventure. Special effects including wind, mist and location-specific scents transport guests to the world’s most striking natural wonders. The team bringing FlyOver to life includes:

“The amount of talent that went into creating FlyOver is astounding and we are proud to have this original flight ride attraction here on the Las Vegas Strip,” said Jack Kenn, general manager of FlyOver in Las Vegas. “From the moment guests enter FlyOver’s intricate lobby to the second they exit to Las Vegas Boulevard, visitors will see the American West in a way they never have before.”

Lisa Adams, vice president of FlyOver Attractions, said, “At Pursuit and FlyOver we work with top talent to create an immersive experience from start to finish. With every location, from Vancouver, Canada, to Reykjavik, Iceland, and now Las Vegas, we capture the feeling of flight to showcase a sensory and thrilling experience across iconic locations and natural landscapes.”

Located on the Las Vegas Strip next to the Hard Rock Cafe, FlyOver in Las Vegas is the third iteration of Pursuit’s FlyOver attraction. The opening date will be revealed in the coming weeks.

Setting the Stage with Moment Factory

For FlyOver in Las Vegas, Montreal-based Moment Factory upped the ante by creating a landmark pre-show experience. Working closely with Rothschild, the team developed a cinematic atmosphere in the venue’s Boarding Area with sprawling vistas and ambient sound effects to set the stage for the main event, reminiscent of the title sequence of a classic western film. Guests are then ushered along suspended platforms into a circular room for a panoramic, six-minute pre-show projected across 360-degree wraparound walls and a central, hanging medallion.

Set to an original score by Tom Holkenborg, rollicking animations chronicle the booms and busts of the American West, from the Cambrian explosion to Gold Rush ghost towns and Silicon Valley startups. Sweeping in scope, the production relied on extensive research to paint an accurate portrait of the region’s diverse landscapes and communities and offer meaningful overtures to the flight.

Welcome to The Real Wild West

Upon completion of Moment Factory’s pre-show, guests take their seats. During their flight, passengers will glide over 22 of the country’s most magnificent cities, monuments and landscapes. Ride highlights include: