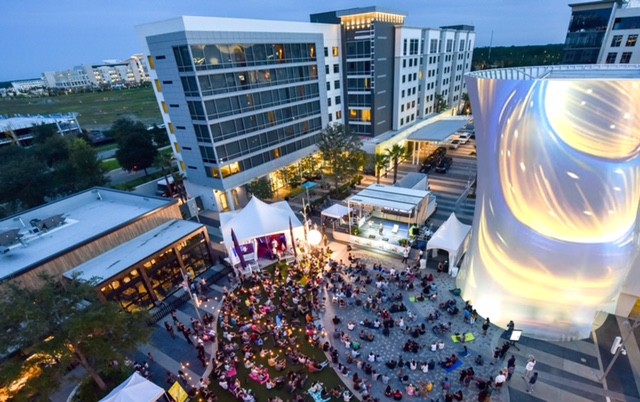 In an internal letter issued July 16, 2021 to cast members, Josh D’Amaro, Chairman of Disney Parks, Experiences and Products (DPEP), announced that 2,000 of the division’s employees would be relocated to a new campus in the Lake Nona masterplanned community, approximately sixteen miles east of the Team Disney headquarters building at the Walt Disney World Resort in Florida.

According to D’Amaro, “With more than 60,000 Cast Members, Imagineers and employees, Central Florida has long been home to many of our businesses including the Walt Disney World Resort and most of our Disney Signature Experiences team. It is also where members of other DPEP businesses reside, including Consumer Products, Games and Publishing and Walt Disney Imagineering, and serves as the hub for many support functions that assist our segment and the entire company….Initially, our new campus will be home to more than 2,000 Cast, Imagineers and employees – driving further collaboration and creativity and allowing us to better integrate our business and functional teams.”

InPark reached out to Disney to find out how many Imagineers would remain in California after the relocation and to inquire whether the move would involve executive management of Walt Disney Imagineering, including co-Presidents Bob Weis and Barbara Bouza. Not all details were available: According to a spokesperson for DPEP, the company is currently determining which cast members are appropriate for the relocation. The spokesperson added that existing Disney offices in Burbank and Glendale, such as the Grand Central Creative Campus, which includes the historic 1401 Flower Street headquarters of Imagineering, will continue to be operated by the company.

Precedent exists for such a move from Los Angeles County to Central Florida, and such moves can facilitate long-range planning and development. In the early 1990s, Universal Creative reduced staff after the completion of its park in Osaka, Japan, then relocated its headquarters and remaining staff from the Hollywood studio lot to its Orlando resort. A few years later, in 1998, Universal would purchase an 1,800-acre parcel from Lockheed Martin for future expansion – what is now set to become Universal’s Epic Universe.

In addition to tax credit benefits, the Disney move is designed to allow for better consolidation between the consumer goods and parks divisions while positioning Imagineering to concentrate on further growth of the Walt Disney World Resort in an effort to remain competitive against Universal and its forthcoming expansion. Meanwhile, it will take an extensive amount of time for the DisneylandForward concept, presented in March 2021, to receive government approval, limiting current expansion options at the California resort.

Throughout the theme park industry, consolidation and relocation of corporate operations has been a common occurrence. Recent examples: Six Flags moved its corporate offices into the former Arlington Stadium offices of the Texas Rangers baseball club; much of Cedar Fair’s operations are handled out of a satellite office in Charlotte, NC; Palace Entertainment announced a satellite operations office in Pittsburgh; and SeaWorld Parks & Entertainment relocated from rented space to a fully owned building on park property. (Prior to that, in 2007, Busch Entertainment Corp., now SeaWorld Parks & Entertainment, relocated from St. Louis to Orlando.)

According to D’Amaro, “most Southern California-based DPEP professional roles not fully dedicated to the Disneyland Roles, or in some cases, the international parks business, will be asked to relocate to the new Florida campus.”

The company is structuring the relocation over an 18-month period in order to better accommodate employees’ needs during the transition period.

Joe Kleimanhttp://wwww.themedreality.com
Raised in San Diego on theme parks, zoos, and IMAX films, InPark's Senior Correspondent Joe Kleiman would expand his childhood loves into two decades as a projectionist and theater director within the giant screen industry. In addition to his work in commercial and museum operations, Joe has volunteered his time to animal husbandry at leading facilities in California and Texas and has played a leading management role for a number of performing arts companies. Joe previously served as News Editor and has remained a contributing author to InPark Magazine since 2011. HIs writing has also appeared in Sound & Communications, LF Examiner, Jim Hill Media, The Planetarian, Behind the Thrills, and MiceChat His blog, ThemedReality.com takes an unconventional look at the attractions industry. Follow on twitter @ThemesRenewed Joe lives in Sacramento, California with his wife, dog, and a ghost.
Share
Facebook
Twitter
Linkedin
Email
Print
WhatsApp
Pinterest
ReddIt
Tumblr
Previous articleBaha Bay water park and casino pavilion opens in The Bahamas
Next articleRothschild returns for design of FlyOver Las Vegas