From Dogs to Dolphins: SeaWorld Responds to Hurricanes Harvey and Irma 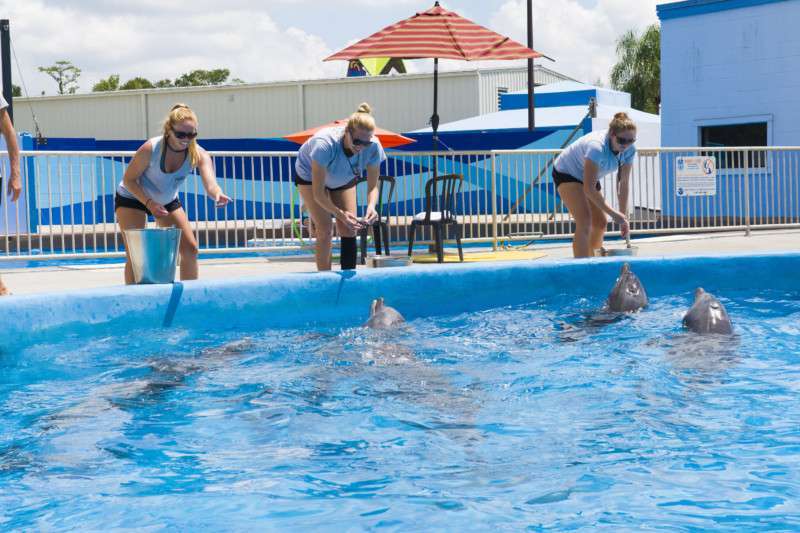 Following our interview with Tim Morrow of the San Antonio Zoo (see link below), we contacted SeaWorld Parks & Entertainment to learn more about their involvement with rescue efforts in Texas and Florida and preparations for Irma.

We would like to thank Suzanne Pelisson Beasley of SeaWorld for taking the time to respond to our questions at a time when SeaWorld’s Central Florida parks and corporate headquarters are preparing for impact from the storm and the company’s response teams are preparing to assist in Irma’s aftermath.

InPark: What’s been accomplished with the Downtown Aquarium Houston?

The SeaWorld San Antonio rescue team, along with other zoological facilities, made its way to Houston, one of the hardest hit areas, to assist where needed in the wake of Hurricane Harvey. Our teams provided food, water, maintenance equipment and other supplies to the Downtown Aquarium and remain committed to assisting other zoological facilities impacted by the storm. In addition, SeaWorld San Antonio is prepared to care for displaced animals as necessary.

A small amount of animal food.

Labor: 3 biologists and a life support specialist to assist them with some of their facilities

Tell us about the relocation of shelter dogs from Houston to San Diego. 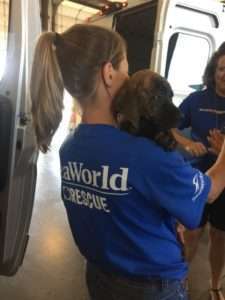 The devastation caused by Hurricane Harvey has been described by families and homeowners on news networks globally over the last weeks. There are those, however, who cannot share their stories – the orphaned pets in shelters that are facing displacement due to the influx of thousands of animals who need shelter as a result of Hurricane Harvey.

On September 5, 64 dogs and cats were rescued from various shelters in the Houston area and gathered at Best Friends Total Pet Care in Spring, Texas. The furry and four-legged passengers were then driven to Austin, Texas and were being flown across the country to their new temporary, safe and secure home at the Helen Woodward Animal Center in Rancho Santa Fe, California.

This extraordinary rescue was made possible by donated manpower from the Helen Woodward Animal Center, and both SeaWorld San Antonio’s and SeaWorld San Diego’s Rescue Teams and volunteers.

SeaWorld’s animal experts in San Diego also donated transportation for the pets to their new home. Once at the Helen Woodward Animal Center, the animals will be evaluated by a veterinarian and receive medical treatments, vaccinations and spaying or neutering before being placed in loving homes with adoptive families.

What is SeaWorld doing to secure its animal collections in Orlando and Tampa?

The marine animals at SeaWorld Orlando, Discovery Cove and Aquatica Orlando will remain secure in their pools and habitats, while birds, small mammals and reptiles will be moved to secure indoor locations. One of our main priorities for animal safety is securing all loose items. We will also have zoological team members on-site caring for the animals and monitoring them around the clock.

At Busch Gardens Tampa Bay precautions are in place following the parks’ extensive comprehensive weather plan to ensure the safety of our animals during this time. This plan includes the movement of animals to their secure night quarters or additional safe enclosures, according to weather conditions. We will also have zoological team members prepared to remain on-site if needed, to care for the animals and monitor them around the clock.

Also yesterday, SeaWorld Orlando received five dolphins (top photo) that were transported from the Florida Keys.  The parks will work with other zoological facilities impacted by the storm and are prepared to care for displaced animals as necessary.

Joe Kleimanhttp://wwww.themedreality.com
Raised in San Diego on theme parks, zoos, and IMAX films, InPark's Senior Correspondent Joe Kleiman would expand his childhood loves into two decades as a projectionist and theater director within the giant screen industry. In addition to his work in commercial and museum operations, Joe has volunteered his time to animal husbandry at leading facilities in California and Texas and has played a leading management role for a number of performing arts companies. Joe previously served as News Editor and has remained a contributing author to InPark Magazine since 2011. HIs writing has also appeared in Sound & Communications, LF Examiner, Jim Hill Media, The Planetarian, Behind the Thrills, and MiceChat His blog, ThemedReality.com takes an unconventional look at the attractions industry. Follow on twitter @ThemesRenewed Joe lives in Sacramento, California with his wife, dog, and a ghost.
Share
Facebook
Twitter
Linkedin
Email
Print
WhatsApp
Pinterest
ReddIt
Tumblr
Previous article
Irma and Harvey Update 9/8 6:00 pm EDT
Next article
Irma Update 9/9 11:00 am EDT: Florida’s Attractions Industry Shuts Down

Alcorn McBride: Is “just-in-time” out of time?