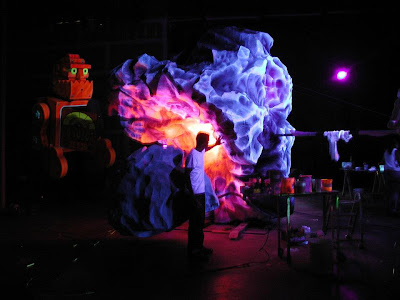 San Bernardino, CA, USA (July 17, 2012) — The company that began in a small suburban garage and grew into the largest animatronics producer in the world is celebrating its 35th anniversary. Garner L. Holt founded Garner Holt Productions, Inc. (GHP) on July 16, 1977, while still a student at San Bernardino’s Pacific High School. Inspired by a childhood trip to Disneyland, young Holt began tinkering with simple animated figures and effects like those he remembered from the park. By the age of 15, he was operating haunted houses in malls from San Bernardino to Orange. What began as the dream of a young boy grew into an obsession with theme park animatronics that led to the founding of his company at age 16. GHP is now the largest designer and builder of animatronic figures on the planet.

“Since I founded the company, we’ve built almost 3,500 animatronic figures,” said Holt. “I started out building simple little skulls that talked. We’re building a velociraptor right now with almost a hundred functions. What we do every day here now would have been unimaginable when I started out.”

GHP’s record of accomplishment in its first three-and-a-half decades of business is a creative and entrepreneurial success story that is a real dream come true for Holt: work in 30 countries on five continents; nearly 500 animatronic shows created for Chuck E. Cheese restaurants; over 400 figures created for Disney theme parks worldwide; a massive 60,000 square foot design and production facility in three buildings; a complete attraction design services organization paired with a world-class production facility; records for both the largest and the smallest animatronic figures ever created; the largest float ever created for a Disney theme park; and proven products in demand by most of the world’s top theme parks. 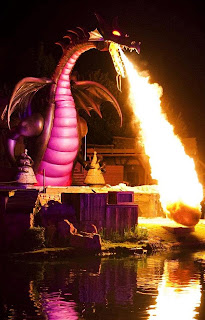 “We were the very first outside vendor to build a compliant animatronic figure for a classic Disney attraction—Jack Skellington in Disneyland’s Haunted Mansion Holiday,” Holt said. “That was a tremendous honor for GHP. We’ve built things for sultans and kings, major theme parks and little roadside attractions. We have work in some of the world’s most famous museums, too. Our scope is truly global.”

When Holt founded his company, Disney was the only major animatronics producer. Other companies built simple animated figures for other parks and displays, and some even tried their hand at Disney-style animatronics, but the technology was still relatively young. As a result, Holt and his company were witnesses—and in many cases pioneers—to the emergence of animatronics breakthroughs in the past three decades.

“My first control systems were the size of refrigerators,” Holt said. “Now we have more computing power in something the size of a tuna sandwich. New technologies make our figures look smoother and more lifelike. GHP is always innovating. I’m always looking out for what will make our animatronics seem more like living characters than mechanical creations.”

“GHP has just been a very blessed series of upward progressions,” said Holt. “I started out in the garage with one card table as a workbench. I moved to a storefront workshop with about twice the space as the garage, then another one twice as big as that. When I moved to our current 40,000 square foot building in 1998, I never thought I’d be able to fill it. I’ve had to buy two additional buildings since then, and we’re still growing. I have hundreds of card tables now!”

35 years on, Garner Holt Productions is a testament to the power of dreams for a unique combination of artist and entrepreneur. For clients from Disney to Universal, NASA to Chuck E. Cheese, and Coca-Cola to Lockheed-Martin, GHP is the only name in animatronics and hundreds of other unique creations.

“We do so many different things,” said Holt. “GHP is such a whirlwind. One day we’re building the world’s largest parade float, the next day we’re doing little songbirds for the Tiki Room. And then we’re doing 40 foot-tall dragons and animatronics for the Navy to help train combatants going into war zones.”

With the outlook for projects in the next eighteen months greater than at almost any period in its history, it at 35 years old, Garner Holt Productions is just getting started.

Joe Kleimanhttp://wwww.themedreality.com
Raised in San Diego on theme parks, zoos, and IMAX films, InPark's Senior Correspondent Joe Kleiman would expand his childhood loves into two decades as a projectionist and theater director within the giant screen industry. In addition to his work in commercial and museum operations, Joe has volunteered his time to animal husbandry at leading facilities in California and Texas and has played a leading management role for a number of performing arts companies. Joe previously served as News Editor and has remained a contributing author to InPark Magazine since 2011. HIs writing has also appeared in Sound & Communications, LF Examiner, Jim Hill Media, The Planetarian, Behind the Thrills, and MiceChat His blog, ThemedReality.com takes an unconventional look at the attractions industry. Follow on twitter @ThemesRenewed Joe lives in Sacramento, California with his wife, dog, and a ghost.
Share
Facebook
Twitter
Linkedin
Email
Print
WhatsApp
Pinterest
ReddIt
Tumblr
Previous articleMaker Faire Detroit Takes Up Residence at The Henry Ford
Next articleSATE 2012 Celebrates Cultural Diversity in Experience Design