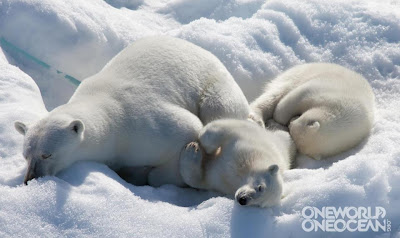 “With more than 40 years of experience creating compelling stories of the highest quality for IMAX audiences of all ages, we are perfectly positioned to expand our services across these different platforms,” says Shaun MacGillivray, Managing Director of MacGillivray Freeman Films. “As a media company, we can provide the content for a multi-faceted campaign and be the entertainment platform for a corporate brand or NGO that wants to utilize extraordinary visuals to communicate its story to consumers.”

MacGillivray Freeman Films launched its first multi-platform campaign last October. The One World One Ocean initiative is a 10-year, multi-faceted media campaign aimed at raising global awareness of the ocean and galvanizing consumer action to restore and protect it. Over the next five years, the campaign will present three ocean-focused IMAX films including this year’s To The Arctic 3D, a television series, a 3D theatrical documentary, and hundreds of hours of original digital video programming for the web and mobile platforms.

“One World One Ocean shows our ability to harness the power of all media, from iPhone to IMAX, to connect people emotionally to the world,” added Patty Collins, Senior Director of Partnerships and Development for MacGillivray Freeman Films. “We want to use our vast skills as storytellers to help trusted brands engage consumers on key issues.”

One World One Ocean’s inaugural film To The Arctic 3D was released on April 20 as a co-production from Warner Bros. Pictures, MacGillivray Freeman Films and IMAX Filmed Entertainment. The film is currently playing in 50 theaters in North America with nearly $3 million in box office returns to date. Surveys show the film is already impacting viewers’ perception and behavior towards the environment with 88% of those surveyed saying they would make more environmentally-sensitive decisions as a result of seeing the film.

MacGillivray Freeman’s MacG Media division is poised to both generate original material and offer clients exclusive access to its vast IMAX film library. From extraordinary nature images captured in the far corners of the planet and the deep sea, to footage from post-Hurricane Katrina, New Orleans, and modern Saudi Arabia, companies and organizations can now access a rich range of content that is impossible to replicate. To fulfill its client needs, MacG Media has established an in-house digital media production unit including producers, writers, editors, and communications experts skilled in executing multi-platform media campaigns for multiple clients.

The campaign, which ended March 15, was an unqualified success. It generated more than 1 billion media impressions and raised more than $2 million in donations for WWF’s Arctic conservation program. The Arctic Home television commercial won Ace Matrix’s “Best Ad of the Year” in the non-alcoholic beverage category, and Advertising Age named Coca-Cola “Marketer of the Year.”

“This was the first time a major brand like Coca-Cola used the power of IMAX storytelling in a marketing campaign of this scale, and we believe it’s the beginning of a new trend in cause-related brand marketing,” added Collins. “Our film footage helped Coca-Cola communicate its message to consumers in a very powerful, emotional way. It’s the perfect case study for how we want to work with other brands and NGOs moving forward.”

Joe Kleimanhttp://wwww.themedreality.com
Raised in San Diego on theme parks, zoos, and IMAX films, Joe Kleiman would expand his childhood loves into two decades as a projectionist and theater director within the giant screen industry. In addition to his work in commercial and museum operations, Joe has volunteered his time to animal husbandry at leading facilities in California and Texas and has played a leading management role for a number of performing arts companies. Joe has been News Editor and contributing author to InPark Magazine since 2011. HIs writing has also appeared in Sound & Communications, LF Examiner, Jim Hill Media, and MiceChat. His blog, ThemedReality.com takes an unconventional look at the attractions industry. Follow on twitter @ThemesRenewed Joe lives in Sacramento, California with his fiancé, two dogs, and a ghost.
Share
Facebook
Twitter
Linkedin
Email
Print
WhatsApp
Pinterest
ReddIt
Tumblr
Previous articleFilmmaker and Explorer James Cameron to Present Keynote at GSCA International Conference
Next articleLEGOLAND Parks Headed to Malaysia and Japan; LEGOLAND Discovery Centre Opens in Tokyo