Girlguides Inducted Into Guiness Book of World Records as 8,500 Dance In Synch at Blackpool Pleasure Beach 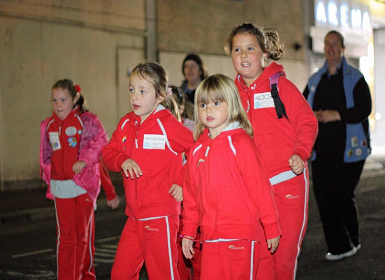 Guides, Brownies and Rainbows from across the North West took part in the mass dance event back in October last year.

And this week they were told their efforts to take part in the world’s largest Cha Cha Slide routine has made it into the Guinness Book of World Records.

Pleasure Beach and Stageworks choreographer Antony Johns and his team put the girls through their paces during their visit to one of the UK’s favourite amusement parks for their biggest regional gathering to date.

8,500 girls learnt the dance moves in a special dance zone created by the park, complete with stage, podiums, sound system, disco lighting and heaps of room for thousands of dancers.

The girls travelled from all over the North West to Pleasure Beach to celebrate Girlguiding North West England’s 40th anniversary.

As well as smashing the previous record, the girls had time to check out the park’s 125 rides and attractions, including the Big One roller coaster and all 12 news rides at the UK’s only Nickelodeon Land.

Commenting on the Guides’ success, Pleasure Beach Managing Director Amanda Thompson OBE, said: “We would like to congratulate the Girlguiding North West England on their fabulous success and getting into the Guinness Book of World Records.

“As a former guide myself it was fantastic to see so many of them enjoying the park for a day of rides, dancing and breaking world records!”

Joe Kleimanhttp://wwww.themedreality.com
Raised in San Diego on theme parks, zoos, and IMAX films, InPark's Senior Correspondent Joe Kleiman would expand his childhood loves into two decades as a projectionist and theater director within the giant screen industry. In addition to his work in commercial and museum operations, Joe has volunteered his time to animal husbandry at leading facilities in California and Texas and has played a leading management role for a number of performing arts companies. Joe previously served as News Editor and has remained a contributing author to InPark Magazine since 2011. HIs writing has also appeared in Sound & Communications, LF Examiner, Jim Hill Media, The Planetarian, Behind the Thrills, and MiceChat His blog, ThemedReality.com takes an unconventional look at the attractions industry. Follow on twitter @ThemesRenewed Joe lives in Sacramento, California with his wife, dog, and a ghost.
Share
Facebook
Twitter
Linkedin
Email
Print
WhatsApp
Pinterest
ReddIt
Tumblr
Previous articleBiltmore and Discovery Place Top List of Most Visited North Carolina Museums
Next articleWarner Bros. Television Group Partners With Paley Center For Three Year Exhibition