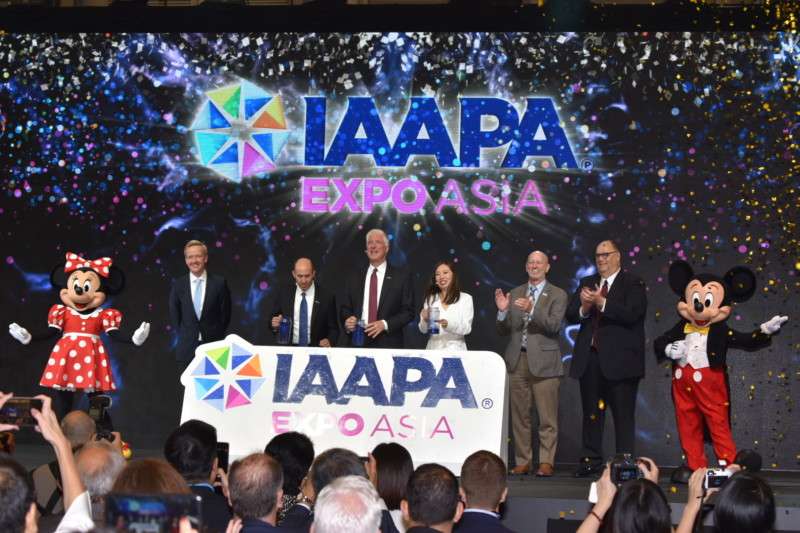 IAAPA Expo Asia 2019 (formerly called IAAPA Asian Attractions Expo) opened with VP of Asia Pacific Operations June Ko dressed as a flight attendant (shades of her former career) welcoming attendees to the Expo and advising everyone to keep their phones, tablets and electronics **in** transmit mode to share everything that was going to happen that week. Later, IAAPA CEO Hal McEvoy and Board Chairman David Rosenberg of Monterey Bay Aquarium welcomed guests to the largest IAAPA Expo Asia with over 400 exhibitors, 100 of them exhibiting for the first time.

“This region is rich in culture and imagination, and I love how this expo brings together people from all over the world,” said Rosenberg. “What I find exciting is how the expo provides a space for innovation and sharing of ideas to happen. Those connections seem to be increasing every year.”

Ko credits the show’s success to a robust market in the Asia Pacific region, particularly China. “The middle class is still expanding in China and the tourism/attractions industries have responded well to the market in the past few years,” said Ko. “All indicators say there is still opportunity to be had here and I see growth continuing in the entire region, with more investments continuing to be made.”

While the show had a successful turnout with over 11,000 attendees, the energy at the event was more calm than in the past. Frenzied speculation seems to have given way to stability in the marketplace. While deals and new projects were apparent, the pace felt more realistic, with most people agreeing that more sustainable projects are better for everyone in the industry.

“Our pre-arranged business meetings have been high quality and taken good advantage of our on-site booth,” said Triotech’s Vice President of Marketing Christian Martin. “IAAPA does a good job producing shows. We consider this show a success for us.”

Many other companies made announcements and released news during the Expo. Here are some of the highlights:

WhiteWater announced that Rainer Maelzer has joined the WhiteWater team as a consultant. He brings with him the exclusive rights to the SlideWheel product, which has been honored with several awards, including a TEA Thea Award earlier this year. WhiteWater also highlighted the recent opening of their Spinning Rapids ride at Shanghai Haichang Ocean Park (which IAAPA attendees experienced during the IAAPA Expo Asia Opening Party). Legacy Entertainment CEO Taylor Jeffs, who helped design Shanghai Haichang Ocean Park, first rode a spinning rapids ride at Parc Astérix and knew one would be a success at Haichang. “The spinning rapids ride at Haichang is a monster,” said Jeffs. “It is almost a kilometer long, includes four lift hills and features WhiteWater’s iconic Manta element to the ride. WhiteWater took their spinning rapids ride and made it even better.”

In the US, Island H2O Live! is now open with WhiteWater’s new Vantage system installed. Vantage allows guests the opportunity to better plan their day at the park and centralizes park services for guests. For operators it offers a suite of data and information to help optimize their planning and operations.

“We’re pleased that [Jialong Parks] have asked us to provide the marque attractions at each of their inaugural theme parks across China,” said Hao Wang, President and COO for Dynamic Attractions. “We are motivated by creating rides that ‘wow’ park operators as much as their guests.”

“Every Jialong Park is designed to provide exceptional experiences for guests,” said Fu ShuQuan. “Our rides and attractions will have a level of sophistication, technology and entertainment that is unlike anything ever seen before in these regions.

Holovis’ recently opened innovation center in Shanghai played host to guests during the Expo. Covering five floors of office space, the new building allows Holovis, along with their partner KingJoy, to expand their presence in China. On display during the event was a haunted house VR experience, a Magic Mirror screen that allowed guests to play virtual dress-up, and Holovis’ 3D cave environment, created for designers to explore attraction spaces before they are built. Amidst the offices and conference rooms, the building also houses a secret karaoke bar, complete with projected animations that react to how impressive (and accurate) a person sings.

Polin Waterparks announced a partnership with MCC Group to help build the MCC Kunming Rainforest, Indoro Snowpark and Adventure Park in Kunming (Yunnan province of China). Covering 4,500 acres and opening in 2022, the project is designed to be constructed in three parts. Part one will include an indoor snow park focusing on heavily themed sports attractions. The second part will include a tropical rainforest waterpark, with slides and attractions provided by Polin. Part three will center around an adventure park for more thrill-oriented visitors.

Birket Engineering launched their inThrall hands-free captioning devices (featuring Disney Sync Link® technology). Designed to be used with off-the-shelf glasses from Epson, caption texts are sent wirelessly from an Alcorn McBride media server and show control system to a small receiver worn around the user’s neck. The glasses, connected to the receiver, display the text in the user’s field of vision, no matter which direction they are looking.

Disney originally developed the technology for use in its theme parks, and Birket’s display included examples from several Orlando theme park attractions. But Disney would like to see the adaptive device be more widely used and licensed the technology to Birket to integrate into a turnkey system that could be dropped into a variety of situations, such as national parks or stand-alone visitor attractions. While the technology will likely continue to shrink and be easier to use over time, it’s an important step in utilizing technology to create more inclusive experiences for all guests.