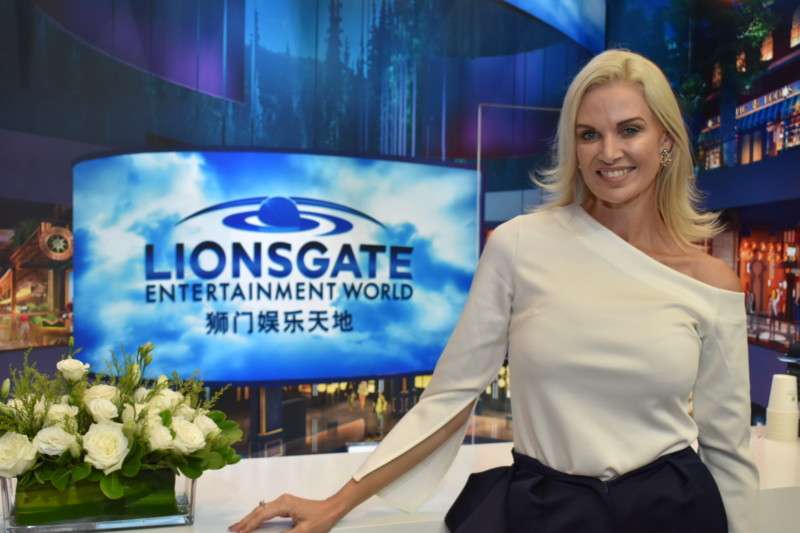 The highly anticipated opening of Lionsgate Entertainment World was a recurring theme during the 2019 IAAPA Expo Asia.  Covering 22,500 square meters over four floors and featuring over 20 attractions, the new theme park in Zhuhai Hengqin, China recently announced an opening date of July 2019. Now the pressure is on for Lionsgate Entertainment World’s general manager Selena Magill to take the park from design and construction into operation. We interviewed Selena to find out what guests can expect when the park doors open.

InPark: Tell us how the partnership between the developers, designers and operators came together.

Selena: The project developer, Lai Sun, built a new mixed-use shopping mall with entertainment and hotel facilities in Hengqin. They wanted to add an anchor attraction that would be a big draw. Since Lionsgate has many film and television properties that are very popular in China, they were chosen as the IP partner. Thinkwell was selected as the main designer and they were responsible for engaging with additional design and creative vendors. Village Roadshow (Selena’s employer) was chosen to operate the park.

InPark: Why is the vertical theme park concept important?

Selena: Everyone is used to the traditional model for a park in China, but we wanted to build a different theme park experience in a small footprint. We have about 22,000 square meters of space, but we focused on density and packed a lot of experiences into the park. The way the park is designed, there is a central courtyard area where you can look up and be surrounded by all of the different themed areas and attractions in the park. It’s very different than the traditional model where different lands are very separate from one another.

Additionally, we did not follow the traditional model for entertainment. There are no specific show times. From the guest’s perspective, it will feel like pop-up entertainment that can happen anywhere around the park.

InPark: VR and AR are used heavily in this park. How are you planning on addressing some of their operational limitations?

Selena: At Village Roadshow we have had experience working with VR before. The technology has continued to improve and become more stable over time. At Lionsgate Park, we have purpose-built VR technology, so it was designed into the attraction from the beginning, not as an afterthought.

For example, our roller coaster was created solely for use with VR. Each ride will take two laps around the track, with the first one being slower and the second one fast. It’s fun to watch as an operator, because riders don’t really know they are repeating the same route.

Also, our Midnight Ride motorbike simulator uses VR, wind, motion and vibration to create the full experience. Guests will feel the bike throttle, smell the pine trees of the forest, as well as see their virtual hands and other friends riding. We also integrated an element of personalization, so even though the ride is pre-programmed, guests can choose some variations in the route. Since our target market is the young adult group, it’s important to have this individualized experience.

InPark: How will The Escape Plan – Prison Break evolve the escape room experience?

Selena: This will be more technologically advanced than traditional escape rooms. It will involve actors, require collaboration with other people in your group, and progress through several rooms in the attraction. It’s so new, we are still putting it together and working through logistics currently. I’ve been so impressed with how the Thinkwell team has been able to take IP and turn them into attraction ideas, and I think The Escape Plan is one that will stand out.

InPark: You’ve held a variety of positions at Village Roadshow, what led you to this project?

Selena: I began at Warner Brothers Movie World’s opening team and have been heavily involved in Village Roadshow’s new ventures. It feels like things have led me to this point. I opened up Wet ‘n’ Wild Hainan, and so as this role became available, I wanted to be able to continue to pursue my love for this business while staying with a company that I love.

InPark: How will this property fit in with other Lionsgate projects?

Selena: It’s kind of exciting to be a part of this, because this is the biggest thing that Lionsgate has done in the attractions space to date. Their other projects have been more limited in size and scope, so this really expands the opportunities for them and I’m honored to be able to help continue to build their brand in this way.

InPark: Can you provide any opening or construction updates?

Selena: We are within days of making an announcement on the opening. [Editor’s Note: Since this interview, Lionsgate Entertainment World has announced an opening for July 2019.] We are committed to ensuring that everything is ready to go at the opening. Since you can see everything from the courtyard area we want to make sure everything is functional.

InPark: What are you most looking forward to at the park?

Selena: Honestly, I am just excited at seeing it all come to life. I can’t wait to stand at the top of the park and see it open with guests experiencing all our wonderful attractions. We are also going to encourage cosplay opportunities for our guests, so I’m looking forward to seeing how people create their own roles within our Lionsgate world.