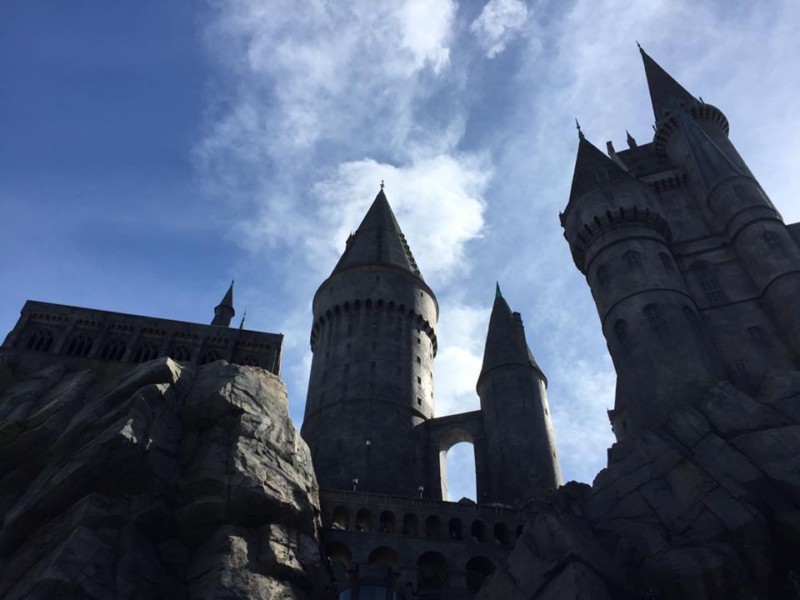 Universal Studios Hollywood has officially unveiled its new Wizarding World of Harry Potter™. Hogwarts Castle now  towers over the Flight of the Hippogriff™ and houses Harry Potter and the Forbidden Journey. This new development in the world of Harry Potter attractions bringing J.K. Rowling’s stories to life replaced the Gibson Amphitheater at the park. With this triumphant opening, Universal Studios parks continue to raise the bar for quality immersive experiences in theme parks and exemplify the power of cross platforming intellectual property into visitor attractions.

To herald the April 7 opening, on the evening of April 6 actors from the Harry Potter films (Warner Bros. Entertainment) came to the park to talk to the media. James and Oliver Phelps, the twins who play Fred and George Weasley, said seeing the snowy-roofed buildings of Hogsmeade glinting in the California sun reminded them of shooting wintry scenes during the hottest day in London on record. Warwick Davis, who played Professor Flitwick, said roller coasters aren’t his usual cup of tea but that he enjoyed Flight of the Hippogriff. The rest of the cast in attendance, Tom Felton (Draco Malfoy), and Evanna Lynch (Luna Lovegood) agreed that the best aspect is being immersed in the world of Harry Potter.

The same level of detail and authenticity that led the Themed Entertainment Association (TEA) to create a new Thea Award category (the Paragon Award) and honor the first Wizarding World attractions with multiple Thea Awards is continued at the Hollywood iteration.

Guests can walk through the village of Hogsmeade, filled with real-world manifestations of the stores they enjoyed reading about in the books and seeing in the movies. There are eight retail venues and locations including Honeydukes™, Ollivanders™, Owl Post™, Zonko’s™ Joke Shop, Wiseacre’s Wizarding Equipment, Dervish and Banges, Gladrags Wizardwear and Filch’s Emporium of Confiscated Goods™. Guests can eat British muggle fare at the Three Broomsticks™, and Hog’s Head pub, as well as the Magic Neep and Butterbeer™ carts. James Phelps claimed the Butterbeer at Universal is better than it was on the set of the films. 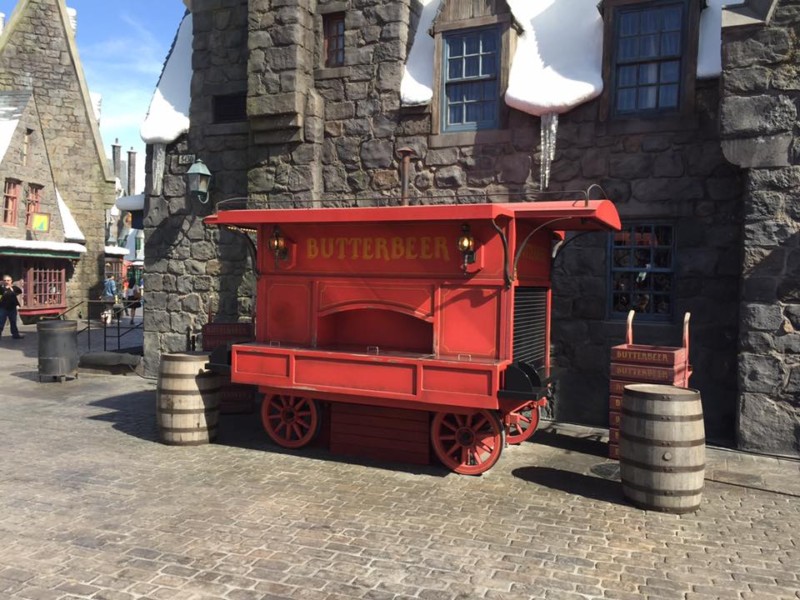 As part of opening day, Mark Woodbury, joined by Thierry Coup, SVP, Universal Creative; Stuart Craig, and Alan Gilmore, Art Director for the Wizarding World of Harry Potter and the Harry Potter films spoke about the new creation. Woodbury said, “We heard our guests, the fans, and have been able to bring [the experience] to them here at Universal Studios Hollywood. There’s no better place than the filmmaking capital of the world to have this experience.” Craig agreed they have made the town a real place, not an illusion or a film set.

Since this is the second Wizarding World of Harry Potter in the U.S., people wondered what the differences were between the new one at Universal Studios Hollywood and the earlier ones at Universal Orlando parks. “Universal Studios Hollywood is anchored by the studio tour, an experience that other Universal parks cannot replicate, ” said Woodbury. “There is no better place to raise Hogwarts castle than on a Hollywood hill.” There are original film props from the movie that are hidden throughout the land. (Hint: the seats inside the photo-op train are the actual seats from the Hogwarts Express used in the film. The luggage racks are the same, as is the luggage.)

“We totally revolutionized the theme park experience when we opened Wizarding World in Orlando in 2010. Finding ways to enhance it was a challenge,” said Alan Gilmore.  While quite similar to the ride at Universal Studios Orlando, Harry Potter and the Forbidden Journey at Universal Studios Hollywood has had some enhancements added to the ride. It still takes the riders through a mini-adventure over the castle, fighting a dragon, playing Quidditch and warding off Dementors. Unlike the eponymous ride in Orlando, this one’s media is 3D and has had some upgrades done with details, such as the Dementors’ arms. When asked if they would be updating the ride in Orlando to match the one in Hollywood, Woodbury replied, “I kind of like the idea of having two versions. It gives you a reason to go to both parks.”

Universal Islands of Adventure (Orlando) gained a 30% jump in annual attendance in 2010 when it added the Wizarding World of Harry Potter. Thierry Coup said, “In 2010, we saw a tremendous response by the guests. We expect to see the same here. Our expectations are quite high.”