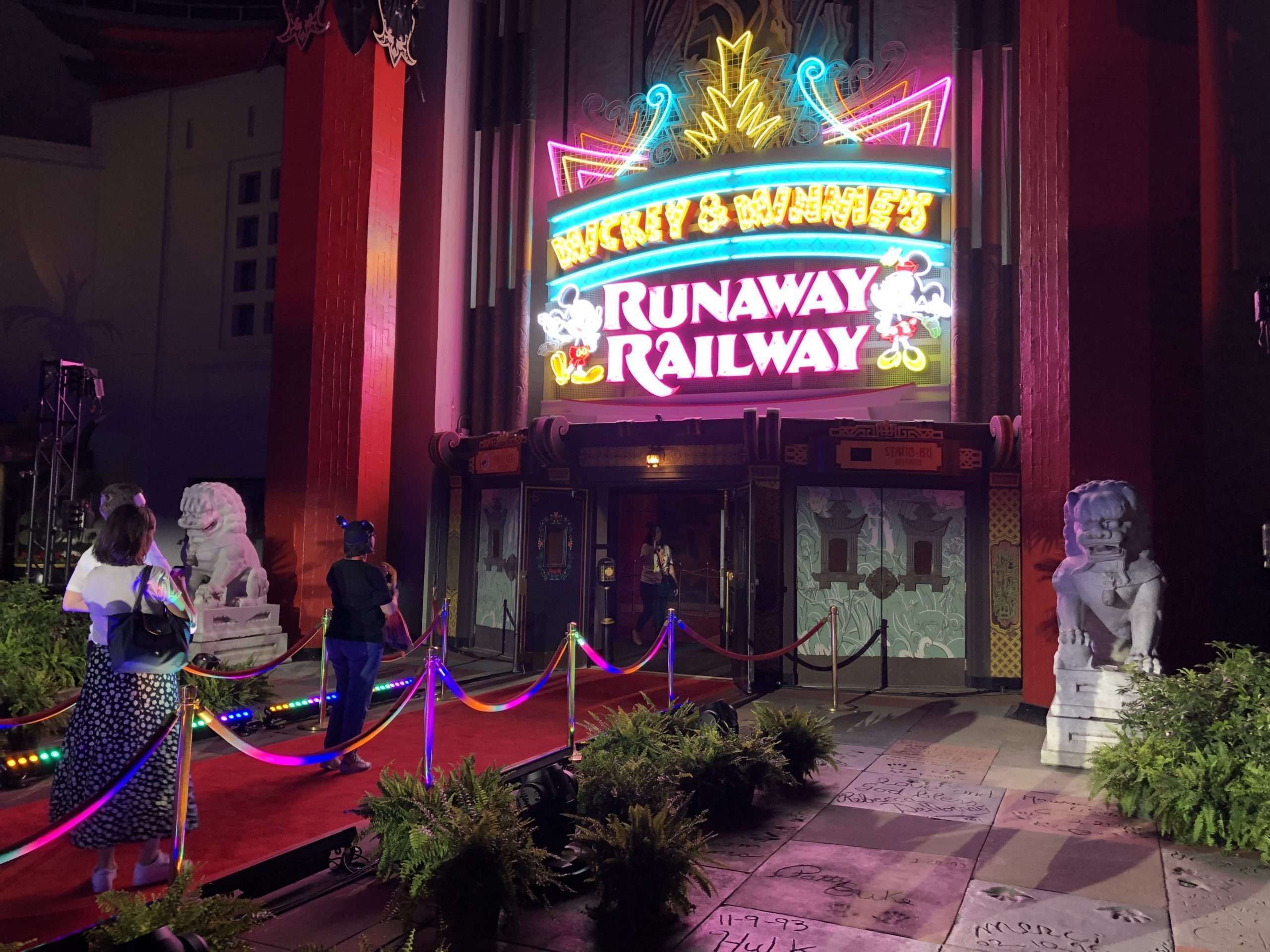 Guests arrive at the iconic Hollywood Studios Chinese Theatre, ostensibly to see to see the latest Mickey Mouse cartoon, “Perfect Picnic.” Guests are led into the theater, which is actually the pre-show to the ride. In the cartoon, Mickey & Minnie prepare for a picnic in Runnamuck Park and croon about how absolutely nothing could possibly go wrong. Of course, something does: a small explosion in the cartoon blows a giant hole in the theater’s movie screen. An attendant opens the gates at the front of the theater and guests walk through the hole in the screen and step into the world of the cartoon themselves.

Immediately passing through the screen threshold, everything begins to look as though it were drawn by hand. Colors pop, most lines curve naturally, and the catchy theme song from the cartoon, with its earworm refrain “Nothing Can Stop Us Now,” follows guests everywhere.

The ride begins with Engineer Goofy captaining his train (and guests) on a tour through Runnamuck Park. Riders soon see Mickey & Minnie on their way to the perfect picnic, but yet another unforeseen mishap causes the locomotive to veer off course and the remaining ride vehicles “runaway” from the railway. The ride then takes guests along on Mickey & Minnie’s cartoon adventures through the Wild West, into a carnival, through the jungle, under the sea and more. Just as vehicles are about to be crunched inside a menacing factory, Mickey and Minnie save the day, transforming the factory into a bucolic park scene. Reunited with Goofy, the train passes the mousy heroes at their penultimate picnic before stopping at the unload station.

Each train consists of four trackless guest vehicles, plus Goofy’s locomotive. Two rows in each car comfortably seat eight adults total, with no height requirements for even the youngest riders. The vehicles arrive on the boarding platform appearing as a conjoined train; the cars are slightly reminiscent of the original The Great Movie Ride cars that occupied the same building from park opening in 1998 until 2017. Those vehicles held dozens of guests each and traveled together in pairs for most of the ride. They were trackless vehicles too, and also somewhat ahead of their time, technology wise. Those original automated guided vehicles followed wires buried in the floor, with minimal deviation from the set path. That same vehicle style was also used in the original Universe of Energy pavilion at EPCOT from 1982 until 2017.

The new MMRR vehicles are much smaller and utilize a different system that allows each vehicle to operate independently and follow a unique path. This is similar to rides Disney has built in Tokyo (Pooh’s Hunny Hunt) and Hong Kong (Mystic Manor). The MMRR vehicles are technological twins to the cars in the Star Wars: Rise of the Resistance attractions at both Hollywood Studios and Disneyland in California. [Disney doesn’t get into the details of how their trackless technology works, but you can learn how another similar modern trackless system technology works in “Cool Moves,” InPark Magazine issue #48.]

Depending on which vehicle a guest is in, the action they see might change from ride to ride, although the story arc remains the same. Based on the timing each individual vehicle enters and exits each scene determines which elements of that scene are viewable, making the attraction highly re-rideable.

Of particular note is the use of projected, animated characters in dimensional spaces. Walt Disney pioneered the use of a multi-plane camera to create dimension and realistic spatial movement in his animated films. It changed how animated films are made, how characters move in environments and how audiences perceive scenes. In a way, the same revolutionary impact can be found within the MMRR attraction. Like the multi-plane camera, characters appear on one plane while background images appear on a different plane. The character still appears 2D, but is living in a 3D world. The effect is used throughout the attraction and it’s impressive. The most obvious example is when Goofy swings open the shutters on the back of his locomotive. His 2D character appears in the middle of the cab, with the wall appearing a bit behind him, just like a real engineer would.

Several animatronic characters exist in the attraction, including Mickie & Minnie, Pluto, and Daisy. They blend in well with the surrounding scenery, with many of them utilizing interior projected face technology for a realistic animated face effect.

The authentic cartoon-style painting throughout the ride combined with the animation embedded everywhere evoke a retro-Disney charm. The versions of Mickey and Minnie are also stylized in their nostalgic 1930s form.

With an attraction that takes such a deep dive into the cartoon world, there are unlimited possibilities for “easter eggs” and, naturally, hidden Mickeys. They appear everywhere throughout the queue and attraction. Mickey’s iconic symbol even appears in a more artistic format in the chandelier metalwork above the queue.

Of course, for those that have a deeper knowledge of Disney trivia and history, the ride is chock full of references…to Ub Iwerks, Imagineering’s headquarters, and significant dates in Disney’s timeline (among others!). Both the general and superfan “easter eggs” together help drive ride repeatability and long-term success for an attraction.

Even more than being a repeatable, fun, family-friendly experience, MMRR is a loving tribute to the characters upon which the entire Disney empire was founded. The technology and artistry within MMRR are great complements to the historic legacy of Walt’s iconic characters.