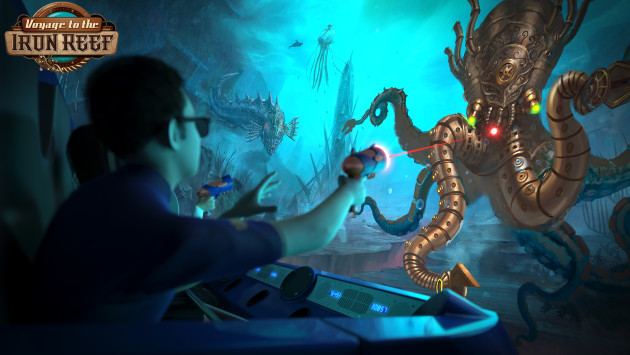 For a decade, an 18,000 square foot building in the far southwest corner of Knott’s Berry Farm remained closed to the public. Between 1975 and 2004, it housed two dark rides featuring animatronic animals; respectively, Knott’s Berry Tales and Kingdom of the Dinosaurs. The building was closed in 2004 and reopened May 15, 2015 with a new, interactive 4D dark ride shooter called Voyage to the Iron Reef.

“It was dark for so long because we were trying to figure out what the right thing was for that space,” says Lara Hanneman, Knott’s Director of Entertainment Production. “We were flowing with ideas of what to put in there. Cowboys came up. Aliens came up. All the normal things you see in dark rides. We even thought about bringing back Berry Tales, but we realized it could never be as good as people remembered it being.”

The new ride would accord with a new corporate policy, “Amusement Dark.” The policy was instituted under parent company Cedar Fair’s CEO Matt Ouimet to bring dark rides with unique intellectual property to some of the Cedar Fair parks. The first park to receive an Amusement Dark attraction was Canada’s Wonderland with its 4D shooter/coaster hybrid Wonder Mountain’s Guardian, open in 2014 (see InPark Magazine Issue #53). According to Raffi Kaprelyan, Knott’s General Manager, “It helps that we have a corporate team that keeps pushing us along the path that leads to attractions being placed in the right places.”

In the past few years, Knott’s has received much attention for its restoration and re-imagining of the Timber Mountain Log Ride and Calico Mine Train, staples of the park from 1969 and 1960, respectively, and in need of updating. Kaprelyan points out, “Our work on the log ride and the mine train was to bring the technology into modern times. With Iron Reef, we applied modern technology right at the outset.”

“The mine ride is more about visual engagement as compared to a thrill ride,” adds Hanneman. “In the broader sense, interactivity is more important than just looking at scenes.” According to Hanneman, we can expect interactive elements to continue cropping up on park attractions in the future.

The attraction was given an aquatic theme in keeping with its location in the Knott’s Boardwalk zone. Its steampunk aesthetic conveys a hip vibe (steampunk refers to an eclectic genre of science fiction and fantasy drawn on the 1800s steam engine era) and is also compatible with the Boardwalk. “Steampunk is really popular,” says Hanneman. “We started doing steampunk in our Necropolis haunt five years ago. It worked very well then and is a continuing trend.” 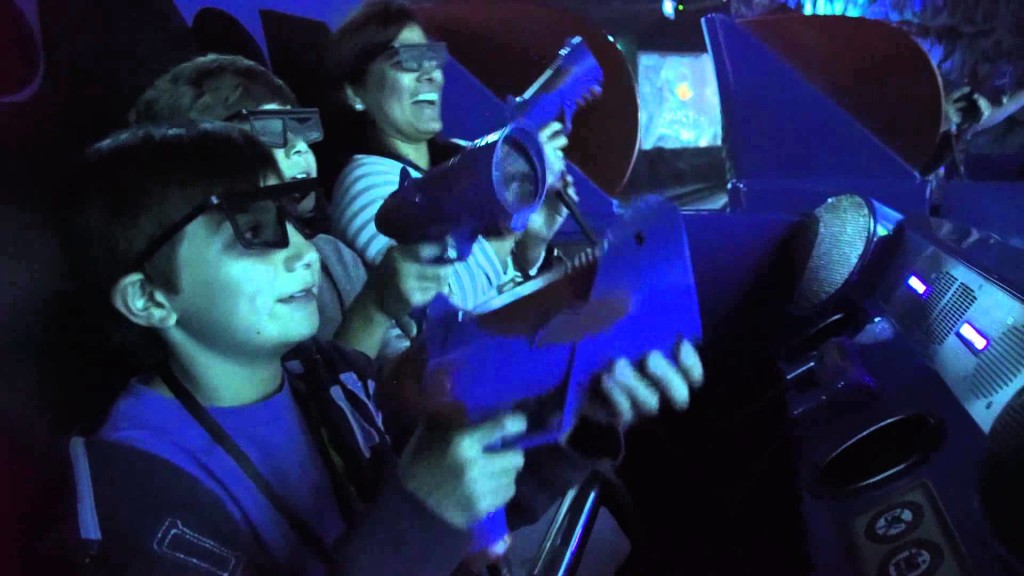 A team of eight

Fans of Berry Tales and Kingdom of the Dinosaurs will remember the long ramps that led to the second floor of the building, where the ride station is located. As the ramps were not ADA compliant, they were removed, opening the face of the building. A new stairwell was built (with an elevator for the disabled) leading to a pre-show room where the backstory for the ride is told through a number of monitors.

The backstory is quite simple. A sea captain discovers that a metallic crab has invaded his boat. Creatures are stealing artifacts from the park. He asks his passengers to help defeat them, and steers towards the lights of the park. This sets them up to expect to confront the steampunk sea creatures once they board the train, and shoot at them with special “freeze ray guns.” 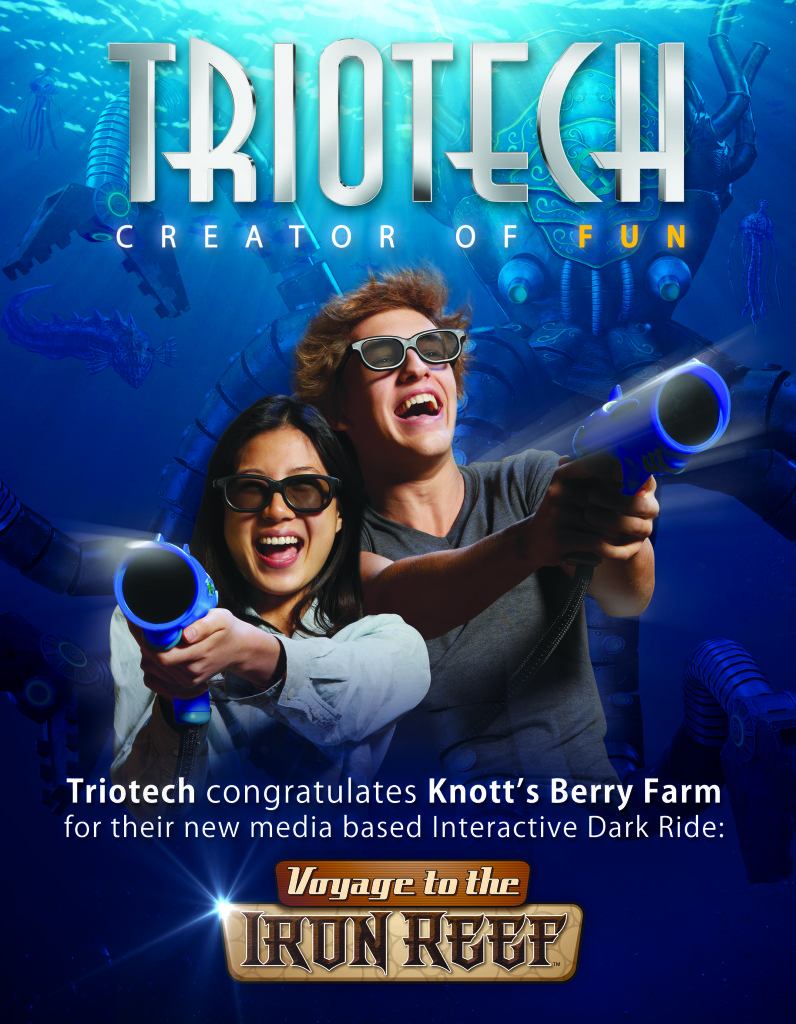 The vehicles are equipped with onboard audio, wind effects, subwoofers, and a color coded gun for each player. As they shoot at the targets, their corresponding color appears on screen. Once the ride is underway, players enter a physical set with a boiler. Inside this room, their freeze guns are charged. In the next room, through 3D animation, they enter a submarine and dive to the ocean depths to confront their targets.

Animation was produced by Triotech, which had 50 people working on the attraction for a year prior to opening. According to Ernest Yale, President of Triotech, “Design wise, Voyage to the Iron Reef was very much a collaboration between the Cedar Fair/Knott’s team and Triotech. The physical set pieces and other theming you can see in the queue area was all Knott’s. However, the characters were more Triotech’s designs. In a project of this scope, there is a lot of back and forth which is what helps make a better attraction in the end.”

Hanneman agrees: “Triotech was very collaborative. Knott’s came up with the general concept of undersea steampunk and worked closely with them on the storyline. They came back with concepts and characters and their 3D art is incredible. They took our theming and made the storyline work.”

Creative use of screens

The illusion of traveling underwater is produced along the 600 feet of track with interactive 3D projection onto a series of 11 custom screens in various configurations and physical set pieces. Yale proudly points out, “The greatest advantage of media-based interactive dark rides is that they are not pre-rendered. This means that what will actually happen on screen is determined by the guests’ actions. For instance, in Voyage to the Iron Reef, a creature will not freeze if it has not been hit by the player’s freeze ray guns.”

Throughout the ride are “Easter eggs” for Knott’s longtime fans: remnants of discontinued attractions “stolen” from the park by the steampunk sealife. They include coaster track from The Corkscrew, the Roaring ‘20s sign that once lit the area around the ride building, the Walter K steamboat, and a car from Knott’s Berry Tales. 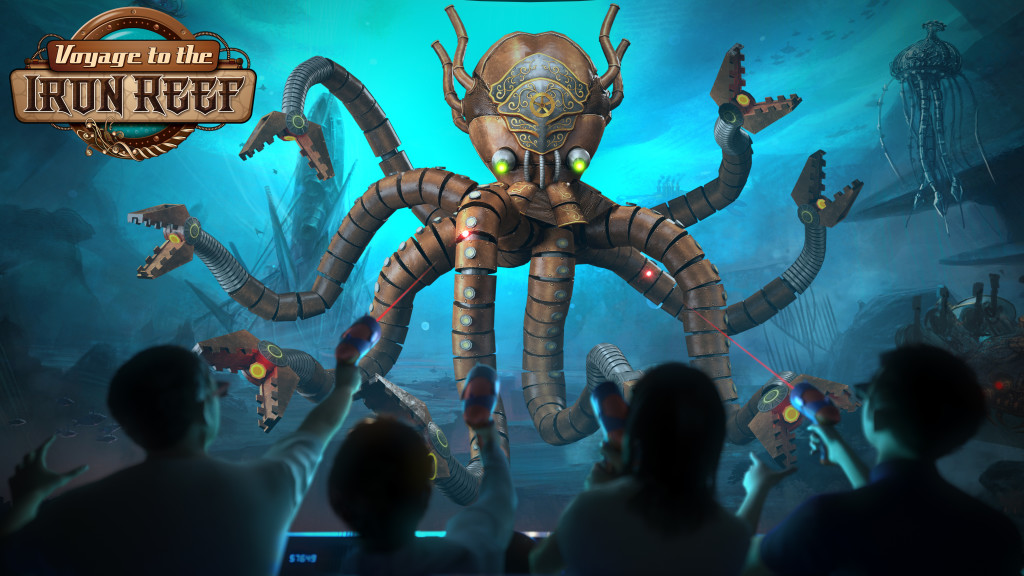 At one point in the ride, a single 180-degree screen is seamlessly used to link two different scenes. Yale explains, “There is technology and then there is knowhow. Developing a ride and integrating different technologies to create a compelling attraction is one of our strengths. In this particular case, which I believe is a first in the industry, we simply pushed what we call the ‘immersion factor’ to the extreme.” When guests first encounter this screen, their attention is initially focused on the left side, with the animation gradually moving in on the smokestack of a sunken ship that will turn out to be the villian’s lair. Once guests enter the ship onscreen, the ride vehicles physically shift to the right side of the screen, and guests are taken on a simulated journey into the bowels of the ship. By using a single screen, the sense of motion remains uninterrupted by any physical space between screens and the transition appears seamless.

Immediately after the 180 degree screen, guests encounter the main villain of the ride. “We wanted it steampunk trendy, but we needed a twist,” says Hanneman, “so we came up with the Kraken Queen.”

“We brought in a series of key elements to make the final scene stand out as a strong moment for the guests,” Yale explains. “We decided to introduce the Queen on the next-to-last screen and thus created a confrontation that is part chase, part fight. Then for the final scene, there is this oversized concave screen. This screen was custom-made for this particular attraction.” The concave screen, which is shaped like a letter “C,” with the center of the screen farthest from the guests, creates a greater sense of stereoscopic depth as the Kraken Queen chases after the attraction’s players. Yale points out that because of this factor, it ends up being “more compelling and rewarding for visitors.”

Iron Reef can be updated over time or have the storyline changed for seasonal events. Hanneman says the transformation can easily be accomplished: “We can place rockwork anywhere.”

The future extends far beyond the Iron Reef attraction itself. Triotech’s Yale notes, “Media-based interactive dark rides are so new that there are lessons that can be learned and applied to new projects. At Triotech, we really push this concept. We want to keep developing and pushing the technology to give guests an amazing experience.”

Within the Cedar Fair family, Knott’s General Manager Raffi Kaprelyan shares, “We learned a lot from Guardian and we’ll learn a lot from this one for the next attraction.” • • •

Joe Kleimanhttp://wwww.themedreality.com
Raised in San Diego on theme parks, zoos, and IMAX films, InPark's Senior Correspondent Joe Kleiman would expand his childhood loves into two decades as a projectionist and theater director within the giant screen industry. In addition to his work in commercial and museum operations, Joe has volunteered his time to animal husbandry at leading facilities in California and Texas and has played a leading management role for a number of performing arts companies. Joe previously served as News Editor and has remained a contributing author to InPark Magazine since 2011. HIs writing has also appeared in Sound & Communications, LF Examiner, Jim Hill Media, The Planetarian, Behind the Thrills, and MiceChat His blog, ThemedReality.com takes an unconventional look at the attractions industry. Follow on twitter @ThemesRenewed Joe lives in Sacramento, California with his wife, dog, and a ghost.
Share
Facebook
Twitter
Linkedin
Email
Print
WhatsApp
Pinterest
ReddIt
Tumblr
Previous articleSolar Superstorms
Next articleThree Holovis Projects