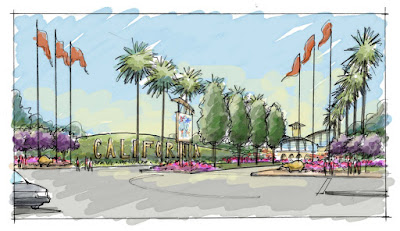 “As we near the completion of the Disney California Adventure expansion, it was important to us to find an appropriate home for the ‘CALIFORNIA’ letters,” said Disneyland Resort President George A. Kalogridis. “The letters were very popular with millions of Guests over the past decade, and Cal Expo is a fitting destination to continue their legacy.”

Plans are underway to make the letters an integral part of a new Cal Expo entrance. The “CALIFORNIA” letters will make their way to their new home sometime in late September and will be placed high enough at the entrance to be seen from Exposition Boulevard.

“The Friends of the California State Fair serving Cal Expo is honored to have been selected the recipient of this gift from Disney Resorts. We see this donation, and the relocation of these letters, a continued and fitting tribute to the celebration of this magnificent state,” said Norb J. Bartosik, Cal Expo CEO/General Manager.

The donation of the letters is the latest among several other iconic Disney California Adventure park artifacts over the last five years.

ABOUT CAL EXPO
California Exposition & State Fair is a year round event facility located in the state capitol of Sacramento, Calif. The State purchased the 1,000 acre parcel of land in 1947 and eventually relocated State Fair operations in 1968, utilizing 350 acres for the annual fair and more than 150 additional events throughout the year. The property currently houses a Grandstand and horse racing track along with twelve exhibition halls and outdoor venues including a concert stage, rodeo arena, livestock pavilion, and equestrian ring. Cal Expo is a stand-alone state agency that generates an annual economic impact of $200 million dollars and produces in excess of 1,400 local jobs. Cal Expo is probably best known as the home of the California State Fair. Held annually in July, this event welcomes 800,000 guests to celebrate the State’s diversity, innovation and creativity. Since 1984, the California State Fair has offered a link between urban and rural California and is a glorious celebration of the people, natural resources and opportunities that make California a great place to live, work and do business. The 2012 State Fair will be held July 12-29. For more information visit www.bigfun.org.

Joe Kleimanhttp://wwww.themedreality.com
Raised in San Diego on theme parks, zoos, and IMAX films, Joe Kleiman would expand his childhood loves into two decades as a projectionist and theater director within the giant screen industry. In addition to his work in commercial and museum operations, Joe has volunteered his time to animal husbandry at leading facilities in California and Texas and has played a leading management role for a number of performing arts companies. Joe has been News Editor and contributing author to InPark Magazine since 2011. HIs writing has also appeared in Sound & Communications, LF Examiner, Jim Hill Media, and MiceChat. His blog, ThemedReality.com takes an unconventional look at the attractions industry. Follow on twitter @ThemesRenewed Joe lives in Sacramento, California with his fiancé, two dogs, and a ghost.
Share
Facebook
Twitter
Linkedin
Email
Print
WhatsApp
Pinterest
ReddIt
Tumblr
Previous articleJFK and Newark Airports Employ Virtual Customer Service Rep from AirportOne.com
Next articleLeMay Auto Museum Opens in Tacoma