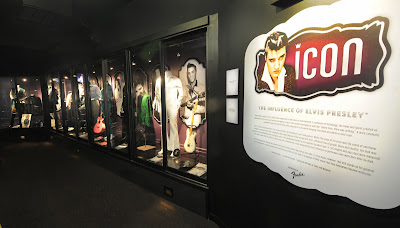 Memphis, TN, USA (March 1, 2012) /BUSINESS WIRE/ — The yearlong 35th anniversary commemoration of the life and legacy of Elvis Presley continues in Memphis with the third and largest exhibit launching at Graceland in 2012. Icon: The Influence of Elvis Presley Presented by Fender will be open March 1, 2012 through February 2013.

Curated by the Graceland archives team in partnership with the Rock and Roll Hall of Fame and Museum, this groundbreaking exhibit features 75 artifacts on loan from the famed Cleveland museum, along with items from the collections of many of today’s biggest names in music who have been influenced by the King of Rock ‘n’ Roll. The exhibit celebrates Elvis’ status as a music pioneer and icon that paved the way for many of today’s artists and celebrities. Items on display in this exhibit include Bono’s “MacPhisto” suit from U2’s Zooropa performances, Bob Dylan’s leather jacket that appears on the album cover “Real Live,” James Brown’s jumpsuit and vest worn in concert in the 1970s, along with artifacts from Elton John, Trisha Yearwood, Joan Jett, Wanda Jackson, Bruce Springsteen, Billy Joel, The Beatles, Katy Perry and many others.

Grammy award-winning artist Amy Grant, a well-known Elvis fan, gladly accepted the invitation to display her personal copy of lyrics for “Heartbreak Hotel,” handwritten for her by the songwriter, Mae Axton. “The ink is fading on the page, but the special memory of spending time with one of the great writers who gave Elvis a song to sing never will,” said Grant when asked about being included in the unique exhibit.

Earlier in 2012, two additional exhibits opened at Graceland. Elvis on Tour celebrates the 40th anniversary of the Golden Globe award-winning documentary of the same name. The documentary takes an in-depth look at Elvis’ multi-city tour during April of that year. Artifacts from the exhibit include the producer’s Golden Globe award, jewelry and stage clothing worn by the king during the concerts, rarely-seen photos, videos and more.

A new addition to the VIP Tour, Elvis…Through His Daughter’s Eyes opened on February 1, Lisa Marie Presley’s birthday, and highlights the relationship between Elvis and his only child. Presley was personally involved in the exhibit’s development and planning. Visitors will see numerous items including family photos and home movies that explore her experience of growing up at Graceland and the relationship with her famous father. Artifacts include Presley’s baby footprints, clothing, childhood tricycle, record player, crib, gold ID bracelet given to her by Elvis and much more.

Graceland is open year round with various tour options. Icon: The Influence of Elvis Presley Presented by Fender is included in the VIP and Platinum Tours. For more information on tours, please visit: http://www.elvis.com/graceland/.

Joe Kleimanhttp://wwww.themedreality.com
Raised in San Diego on theme parks, zoos, and IMAX films, InPark's Senior Correspondent Joe Kleiman would expand his childhood loves into two decades as a projectionist and theater director within the giant screen industry. In addition to his work in commercial and museum operations, Joe has volunteered his time to animal husbandry at leading facilities in California and Texas and has played a leading management role for a number of performing arts companies. Joe previously served as News Editor and has remained a contributing author to InPark Magazine since 2011. HIs writing has also appeared in Sound & Communications, LF Examiner, Jim Hill Media, The Planetarian, Behind the Thrills, and MiceChat His blog, ThemedReality.com takes an unconventional look at the attractions industry. Follow on twitter @ThemesRenewed Joe lives in Sacramento, California with his wife, dog, and a ghost.
Share
Facebook
Twitter
Linkedin
Email
Print
WhatsApp
Pinterest
ReddIt
Tumblr
Previous articleBlackpool Pleasure Beach 2012 Season Features New Twists on Shows and Attractions
Next articleHD Makeover of Spider-man Opens Next Week at Universal Orlando