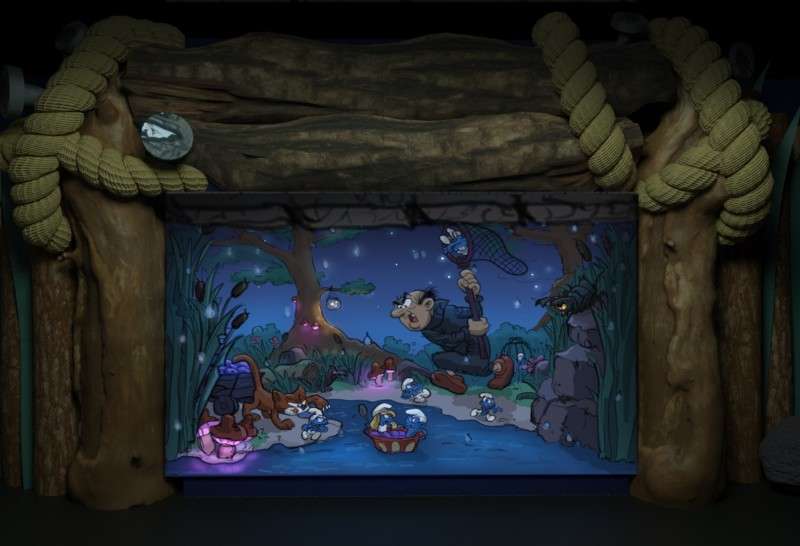 Shimao Group will be opening a brand-new Smurfs theme park (phase two of Shimao Dream City Theme Park) in Shanghai in 2019. One of the rides in the indoor Smurfs Village will be a Smurf themed GameChanger, completely developed and installed by Lagotronics Projects.

The Smurfs theme park is being realized by Shimao Group in partnership with Belgian company IMPS (holder of the rights of the Smurf’s IP). KCC Entertainment Design company serves as design team for the park.

The park will have 4 themed zones. One is outdoor and the other three are indoor: The Forest, Gargamel’s House, The Outdoors and Smurfs Village. The GameChanger ride will be located in Smurfs Village, and is going to be a true Swamp Adventure. This rotating Dark Ride will have 4 different interactive media-scenes. Developed by Lagotronics Projects, the game-play will differ from other interactive Media Dark Rides: instead of playing the game in a static scene, the players now will feel like they’re moving through the scenes because of the dynamic viewpoint.

Get ready for a Smurfs challenge

To keep the excitement going, a number of details are still to be revealed. The attraction promises to be a typical Smurf-style adventure, where visitors need to help the Smurfs to stay out of Gargamel’s hands and set free the poor Smurfs who already have been captured.

Lagotronics Projects is pleased that Shimao choose the GameChanger once again. In 2016, Shimao opened the world’s very first GameChanger: the Max Ranger in Skyscraper City (Shishi). This is also the second time Lagotronics Projects has partnered with KCC Entertainment Design, after the successful cooperation in the TEKZONE project in Kuwait.

Joe Kleimanhttp://wwww.themedreality.com
Raised in San Diego on theme parks, zoos, and IMAX films, Joe Kleiman would expand his childhood loves into two decades as a projectionist and theater director within the giant screen industry. In addition to his work in commercial and museum operations, Joe has volunteered his time to animal husbandry at leading facilities in California and Texas and has played a leading management role for a number of performing arts companies. Joe has been News Editor and contributing author to InPark Magazine since 2011. HIs writing has also appeared in Sound & Communications, LF Examiner, Jim Hill Media, and MiceChat. His blog, ThemedReality.com takes an unconventional look at the attractions industry. Follow on twitter @ThemesRenewed Joe lives in Sacramento, California with his fiancé, two dogs, and a ghost.
Share
Facebook
Twitter
Linkedin
Email
Print
WhatsApp
Pinterest
ReddIt
Tumblr
Previous articleWhiteWater brings record-breaking spinning rapids ride to Shanghai Haichang Ocean Park
Next articleVIDEO: Pavilions of Expo 2020 Dubai part 3